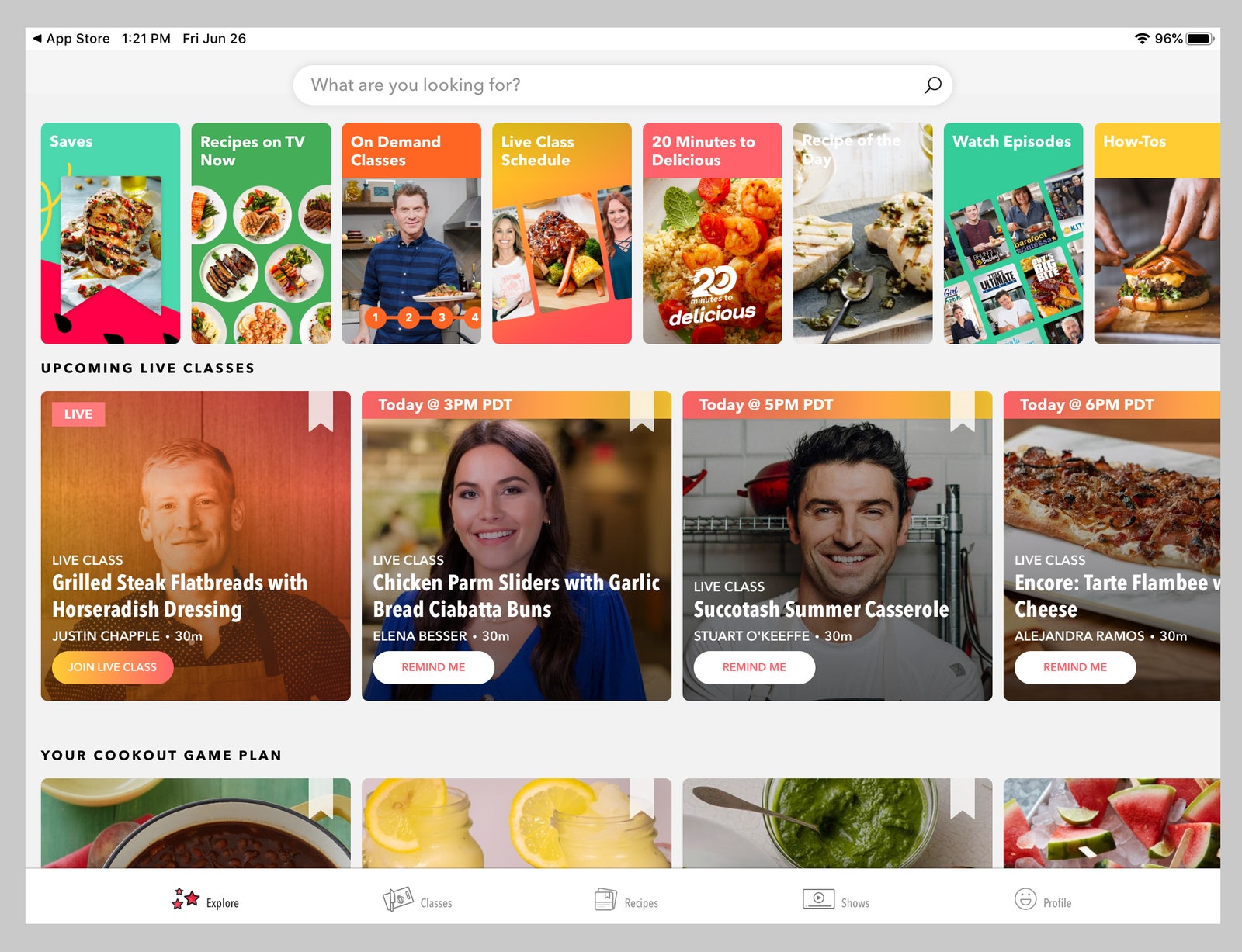 The Food Network’s cooking app gets hyped as “The Peloton of Food,” like it’s being pitched to a venture capital firm. Dubbed the Food Network Kitchen, the app is available on iOS, Android, and Amazon devices, and it offers a growing host of content featuring scads of Food Network stars who are so famous, that you only need their first names—Alton! Bobby! Giada! Ina! Martha! Rachael!

The app goes beyond instructional videos by providing a twist: the offer of live classes where viewers can interact with the chefs as they work their way through a recipe. This concept immediately sent my mind to a talk-radio format. Hiya, Ina! Long-time listener, first-time caller. Love your show. What I wanna know is: How do you make your pâte brisée so flaky?

The chance to interact with real TV chefs sounded exciting. Plus it’s offered with a 60-day free trial, which then turns into $5 a month or $40 for a full year. I tapped the download button on my phone. Well, technically I had called in an Echo Show to test the app, since it was announced as a collaboration with Amazon, but the interface, both on the screen and with voice commands, was so wholly unintuitive and such a hot mess that I sent the Show back. Then I hit download on my phone.

On my iPhone, however, the app is pretty slick. It’s a searchable set of recipes cooked by experts. You can look up by recipe or ingredient or chef. Even in the first months of the app’s existence, there was already plenty of content and enough variety to keep most folks happy. A search for “mussels” returns over 400 recipes, plus six classes, including offerings from Bobby Flay, Rachael Ray, and Jerry Traunfeld. There are themed channels like Thanksgiving 101, Our Best Baked Pasta Recipes, and 30-Minute Dinners. You can also tune into live classes, check a schedule for what’s coming up, or choose from a trove of previously recorded classes, some of which have viewer questions and some don’t.

In the process of settling in, I quickly learned three things. First, the whole “interact with your favorite chef” thing sounds catchy but is not that helpful. Second, the classes, whether they’re taking questions or not, are pretty much what we call “cooking shows,” but unencumbered by the need to fit into a 30- or 60-minute time slot. Third and most important, the app works really well, and has a host of good content. In fact, you can pretty much just think of the app like the happy mashup of an on-demand Roku channel and a favorite cookbook.

Good content is the Food Network’s stock-in-trade. Their chefs have camera-ready personalities, but they’re on the network because they are experts in the kitchen. The app has plenty of repackaged content, but it also allows the network to showcase and monetize their recipes.

The first class I watched was Daniel Patterson demonstrating his poached scrambled eggs. Patterson is perhaps best known for his high-end San Francisco restaurant, Coi, and those eggs are something I’d heard of—how do you poach and scramble an egg? Here was the chef himself, ready to teach me.

It’s cute! Patterson has an endearing earnestness in this class, briefly explaining how the technique came about, and even counts out loud to twenty as his eggs go from raw to cooked. The video is a little more than eight minutes. Nine minutes after I hit play, I cracked two eggs into a bowl and turned on a pot of water. Five minutes after that, I made a light lunch, having not only seen but executed one of the most interesting culinary tricks I’d learned in months. I spooned the eggs over some salsa verde I had in the fridge, topped them with olive oil, salt and pepper, and sat down for a quick and healthy meal that I envisioned becoming a house staple.

I was also excited to see chef Michael Solomonov. I profiled him years ago, and the memory of the fried chicken he made at the Philadelphia shop Federal Donuts has haunted me ever since. And here he was, demonstrating how to make that fried chicken. I also watched NYC chef Daniel Boulud demonstrate the most amazing omelette technique I’ve ever seen, simultaneously stirring in tiny circles around the edge of the pan with his right hand and shaking the pan back and forth with his left. He’s just making eggs, but it’s a four-minute tour de force, the skill of a lifetime on display.

From there, I flitted around on the app, getting a feel for it by binge watching. Many of the classes are mini demos: short, sweet, and informative. Longer recipes (like Solomonov’s fried chicken) are broken into a series of steps that allow for better scooting around in the recipe once you’re ready to cook. Yet this binge watching was beginning to reveal a disturbing trend, one which, if I continued seeing it in my testing, would render all of the good the app did moot.

The first “live class” I watched had been taped previously but looked great. In it, Geoffrey Zakarian made mushroom bruschetta. He had much of his prep done before the show started, but worked in real time, a bit like an impromptu cooking show. He also offered himself up for questions while he trimmed chanterelle stems. Viewers type in questions on the app and an off-camera voice reads them to the cook. One came in to see if he washed mushrooms (usually, no), and another about what he’d serve these mushrooms with (anything). But later he’s asked about another show he does, and his favorite kitchen gadget.

You see him toast baguette slices under the broiler and sauté the mushrooms, and watch the whole dish come together, but it’s worth knowing that you only text in questions; the chefs can’t see you; you’re not meant to be cooking along at home. It’s simultaneously every cooking show you’ve ever seen and something a little different. I could do without the audience questions—that felt pretty gimmicky and some of the questions felt a little off topic—so I didn’t feel any real need to watch classes live. Most importantly, it’s good content in a modern package and one of the few examples of what’s smart about the smart kitchen.

I pulled my apron off its hook and moved into the kitchen testing phase, starting with a pasta with roast kabocha squash dish cooked by Canal House chefs Melissa Hamilton and Christopher Hirsheimer and immediately tried something new to me. Kabocha squash looks like something that might get pride of place in an arrangement during decorative gourd season, but I’d never cooked with it and I was glad for the video primer: cut it in half along the equator; slather it with olive oil, salt, and pepper; and roast. It’s lovely with rigatoni, some persevered lemon, pasta water, and pecorino.

Next up, I cooked with Bobby, watching him cook classic French moules marinières, here renamed “Bobby’s Steamed Mussels.” While monsieur Flay adds nothing but his name to the classic recipe, that’s not the point. The class feels designed to bring new people into the fold, and he makes a point to talk about how easy they are to make. My wife Elisabeth and I had no complaints about demolishing a bowl of mussels and dipping baguette slices into the sauce of garlic, wine, and shallots.

Next, Elisabeth and I went up to Vancouver to see her mom and I made pasta e fagioli, aka pasta fazool, with chef Jeff Mauro, but ran straight into a problem: I couldn’t get the videos to work, most likely a border-crossing licensing issue and not the app’s fault. I was able to see the recipes, though, so I printed one up and went to Cioffi’s deli for pancetta and ditalini. I had zero expectations for the dish, but liked the idea of using it as a way to test the quality of the app’s written recipes. Like Bobby’s mussels, no ground was broken here, but classics are classics for a reason, and we devoured the dish, slurping up garlicky spoonfuls of cannellini beans, tomato, and pasta.

After these dishes, it was time to watch a live class in real time, and what better way to do this than going on a half-hour cooking bender with Rachael Ray? (No relation.) Hers was a phenomenon I’d observed from without and here, while watching her make chorizo and shrimp quesadillas with chimichurri, she was bracing and funny.

“Let’s cook and drink and have some fun,” she declared. I sat there and watched her do all three, feeling a little bit like I’d gone to her place for drinks and we got to catch up while she cooked.

I started typing in a slightly-snarky question about the origins of the dish, but she addressed it before I could even hit send.

“It’s a mashup of tapas—little dishes from Spain—and quesadilla. So I’m calling it at ‘tapadilla,'” she proclaimed. The following day she was going to make what she called “English Pub Burgers,” flying the Union Jack over the patties because she was serving them on English muffins.

Later, I prepped the tapadilla ingredients and Elisabeth cooked. Did it feel particularly Spanish or Mexican, with hints of Portugal (mixing meat and seafood), Argentina (chimichurri), and the USA (pepper jack cheese)? I’m not sure there’s an answer to that question, but the show was fun and if your expectations are set accordingly, it makes a nice dinner.

One thing that did matter was the recipe calling for piquillo peppers (am I the only person who didn’t know those come in a jar?) but then never mentioning that they need to be chopped.

I did a few other things on the app, like watching a live knife-skills class and making chicken paillard and halibut en papillote. I also bookmarked a few other recipes and classes for future reading and binge watching. I realized they’d built a little ecosystem with the app and I was pretty happy to be walled into it.

However, there’s a glaring shortcoming in that curated ecosystem that prevents me from to urging you to subscribe. Look at those cooking stars whose segments I watched and whose recipes I tested. Almost all of them are white people. It’s 2020; where’s the diversity? In fact, the Food Network—and food media in general—has long been criticized for presenting an unbalanced view of the world’s food cultures. The cable channel has a statement on its website about its commitment to diversity, but the roster of on-screen talent is still mostly white. And so, of course, the app is mostly white as well.

Clearly, in the months since the app came out, there’s been an effort to change this, with more black, brown, and Asian hosts appearing in the mix. But, still—yikes. Even now, there’s a guy with a man bun featured more prominently than a person of color on the app’s welcome page. Same deal on the page for the 60-day trial.

So does the app work well? Can you learn from it? Yes to both. But now, especially now, I have a hard time giving it my full recommendation. At least, not until it grows up.