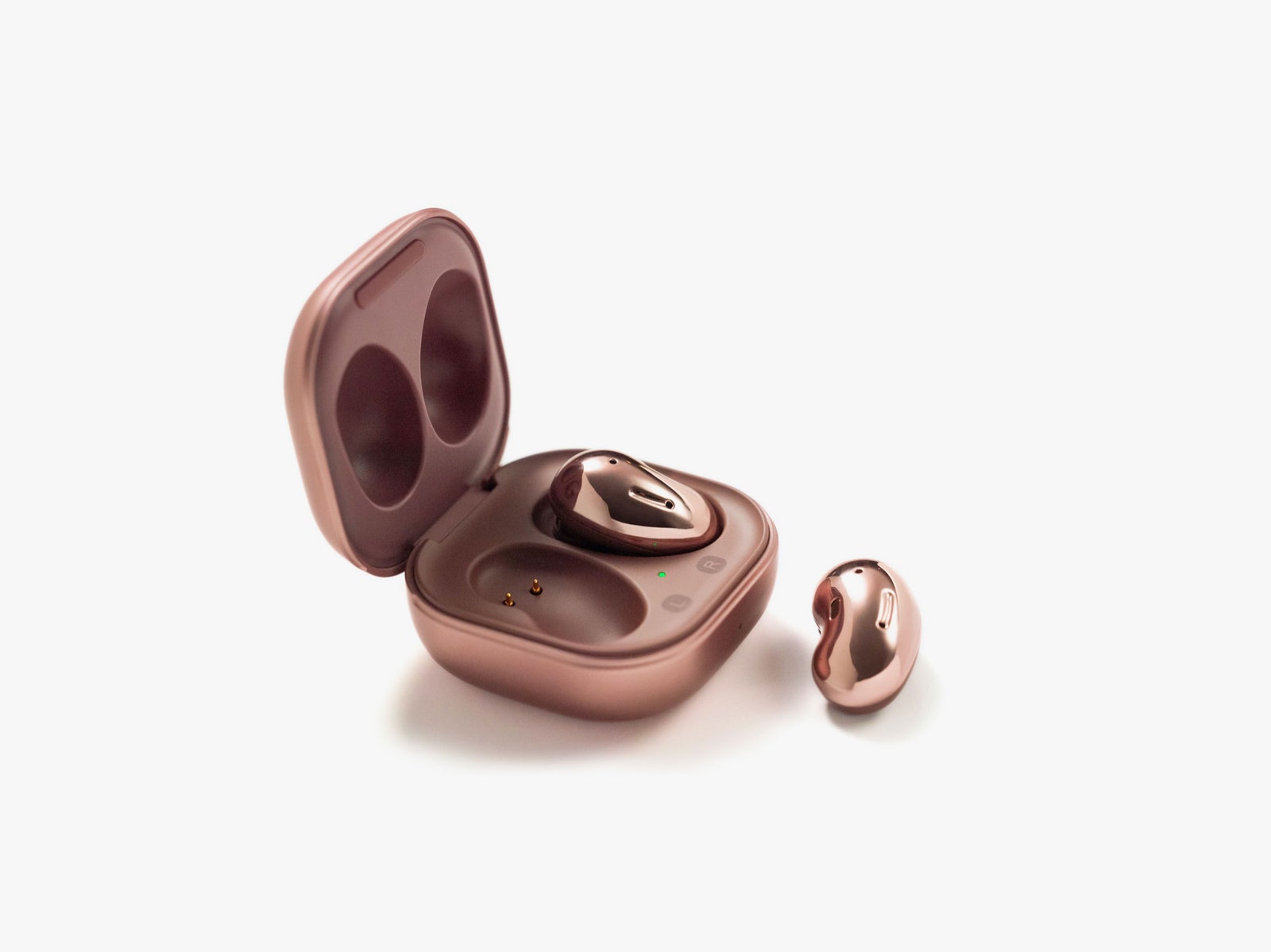 Go back a couple of hundred years and a man named Jack would probably bury Samsung’s latest earbuds in the ground and wait for them to sprout.

Take one look at them and it’s hard to blame the impulse. The pink, bean-shaped Galaxy Buds Live certainly look magical, unlike anything I’ve ever been asked to put in my ears before. But are these earbuds, colloquially referred to as “bean buds,” truly innovative? Or are they just an outlandish design concept somehow gone mainstream?

I spent a few weeks trying to avoid popping the noise-canceling buds in my mouth between listens, and I’ve got to admit, I’ve really come to like Samsung’s newest AirPods competitor. They’ve got better sound, a more comfortable fit, and nearly double the battery life of Apple’s best-selling buds. I think they look pretty cool when they’re in your ears, too.

There are essentially three main wireless earbud designs that have taken over since Apple removed the headphone jack from the iPhone four years ago. There are AirPod-like golf tees, clip-style workout buds like the Beats Powerbeats Pro, and ergonomic, earplug-like headphones like the Jabra Elite Active 75t.

The Buds Live change the mold. They take the ergonomic design language used by the likes of Jabra and make it a bit rounder and more simple, creating a slightly curved bud that fits well in most ears. They do all that without requiring big earfins or silicone tips to stay in place.

The mashup between tipless, AirPod-like design and ergonomic Jabra-style fit looks very pretty in pictures, but I was initially skeptical. I’ve never liked a pair of earbuds without silicone ear tips before. Tipless designs like the AirPods leak bass (and your music) to those around you, and they’re also hard on the soft interior of your ears. If I wear AirPods or their many tipless imitators for more than an hour or so, I’m often left rubbing my ears in pain.

I didn’t have this issue with the Buds Live. Samsung’s design is so much more ergonomic, I never got the same kind of ear fatigue. Full disclosure: I have medium-size ears. For me, the Buds Live slip right in, with the drivers and their hard plastic exterior pushing perfectly into my ear canals. It’s not an airtight seal, but it’s pretty darn close—much better than I’ve experienced with other tipless buds. WIRED senior writer Adrienne So tried the Buds Live and says they fit well in her smaller ears too. There have been some reviewers who say they don’t fit as well as they’d like. Your mileage may vary.

There’s a bit of a learning curve when it comes to putting them in your ears—I recommend a slight twisting motion—but once they’re in, they’re not going anywhere. I took the buds on numerous summer runs and wasn’t afraid of losing them once. With AirPods, I avoid every storm drain. Speaking of, the Buds Live are IPX2-rated, so sweat shouldn’t be a problem and they should be fine in the rain.

That’s not to say these are the best workout earbuds by any means. Because the Galaxy Buds Live don’t have large earfins or clips to keep them in or on your ears, they do need to be adjusted a bit during workouts—that can be a bit of a hassle.

The built-in touch controls work great when you’re casually listening. You can play, pause, and skip songs. A long press will turn noise cancellation on or off too. But I did find myself accidentally pausing tunes when adjusting the earbuds on runs. It’s not a huge issue, but it’s enough to make the Buds Live not the ideal choice for someone who works out a lot.

The Galaxy Buds Live have a dual-mic active-noise-canceling system similar to Apple’s AirPods Pro (8/10, Wired Recommends), but I’d be lying if I told you they compete with Apple’s stunning level of silence. With the open design on the beans, active noise-canceling just can’t do as much. In Samsung’s defense, these earbuds are nearly $80 cheaper. They still do a decent job quieting the sounds of HVAC and other steady noises.

Sound quality, unlike the noise-canceling tech, is on par with the AirPods Pro. They’ve got bold, energetic bass and detailed highs, with a fairly prominent scoop in the midrange to help with overall clarity. It’s certainly not the flat, audiophile-style sound you’ll get from wired in-ear monitors that cost the same price, but the Galaxy Buds Live reproduce my favorite music pretty well for wireless earbuds.

My favorite thing to listen to on them? Pop music. Even Taylor Swift’s folkie new record comes through with a nice hi-fi sheen, pushing me through chores around the house with ease.

They’re also oddly well-suited to certain darker folk recordings, like Bruce Springsteen’s Nebraska, where they provide a bit of a lift in the high end and a bit more definition on the bass notes of his acoustic guitar. The ventilated design of the Buds Live makes the soundstage feel a bit wider, instead of boxing the music in like many earbuds.

Even beyond the sound, the Buds Live are well-suited to be an everyday listening accessory. They’ve got an impressive six hours of battery life with noise-canceling on (about eight hours with it off), and you can even charge the case on a wireless charging pad (or off the back of a recent Samsung phone like the Galaxy S20). That case adds around 28 hours of listening time with noise-canceling off, and 22 hours with it enabled.

They’re intuitive to use, pair quickly, and have good audio quality. In a pinch, they’re even decent workout earbuds. They look really cool in my ears too, like the shiny liquid metal from Terminator movies. They won’t sprout a magic beanstalk, but the Galaxy Buds Live do break new ground in the wirefree category in terms of design, and they do it well.

I’d take these over Apple’s basic AirPods in a heartbeat. They may not be my favorite model from Samsung—to be honest, I still like the Galaxy Buds Plus (8/10, WIRED Recommends) a titch more—but the Buds Live are good enough that I see them appealing to people who want something stylish. Given how outlandish they appeared at first, that’s a pretty big win.