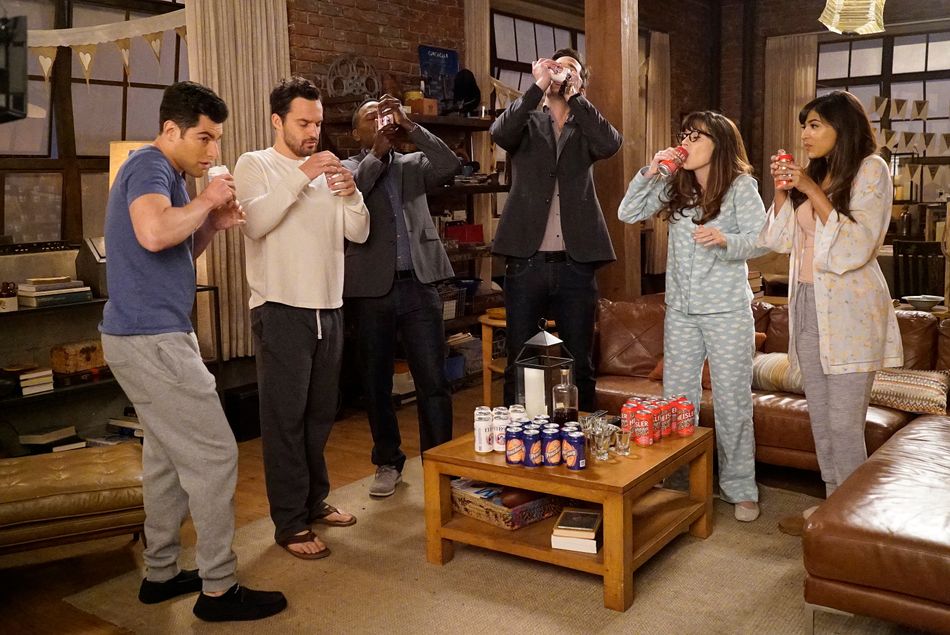 In 2020, a year that’s hellbent on introducing a constant and unwavering string of harsh anxieties, TV lovers have found their perfect weighted blanket: New Girl.

Though popular television shows like Friends, The Office, and The Sopranos are classic rewatch choices, it’s the delightful sitcom about a quirky, broken-hearted girl who moves into an apartment with three dudes that has triumphantly emerged as the ultimate quarantine binge.

New Girl, which first aired in Sept. 2011, is a lighthearted, feel-good comedy that prioritizes friendship, celebrates awkwardness, and embraces imperfection. The show embodies chaotic good at its finest, which is why it’s the ideal antidote to such a chaotic evil year.

Whether you’re meeting the loft pals — Jess (Zooey Deschanel,) Nick (Jake Johnson,) Winston (Lamorne Morris,) Schmidt (Max Greenfield,) Cece (Hannah Simone,) and Coach (Damon Wayans, Jr.) — for the first time, or are simply falling back in love with them after a few years apart, burning through the show’s seven seasons is guaranteed to bring some extra comfort and joy to your life.

In addition to being laugh-out-loud funny and incredibly charming, there are a slew of other reasons why the show might be making such a huge comeback in 2020. It’s largely set in an apartment, which hits different during a pandemic. There’s mayhem unfolding at all times, which is extremely relatable right now.

It also features one of the best on-screen first kisses of all time, which is great because many of us are starved for romantic relationships. And as it turns out, Nick Miller’s regular state of being resonates deeply with our quarantine selves. (Not to mention, he’s a perfect quarantine crush.)

If you’re stressed in any way, shape, or form, watching Jess sob to Dirty Dancing and Taylor Swift music will help. Seeing Nick ping-pong between having absolutely zero ambition and feeling like he can conquer the world will help. And seeing Schmidt learn to do laundry for the first time will help.

Sometimes when the world gets you down you just need to sit back, relax, and watch other people spectacularly fail at life. And with each and every episode, New Girl makes everyday failures seem hilarious instead of life-ruining.

If you’re looking for a wholesome new distraction from the hellfire that is 2020, New Girl is one of your best escapes.

currently rewatching new girl for the fourth time since quarantine began I. Have. A. Problem.

100% true. friends has funny moments, like pivot and ross playing the bagpipes, but overall it’s boring. i can’t sit and watch every single episode, i would just pick out the funny ones

new girl, i rewatched in its entirety during quarantine and i was still dying laughing LOL https://t.co/ANywBJ8MWB

I’m afraid of the eventual “what did you do in quarantine?” talk around the office when we go back. How can I make “got really into hard seltzers and watched all of New Girl twice” sound impressive?

Rewatching New Girl early in this quarantine was one of the best mental health decisions I made. I’m glad more people are finding it and enjoying it! https://t.co/FPuqcKPKvY

Have i watched New Girl over 10 times over quarantine???? Yes. Will i start it again right now???? Also yes

After seeing the show get some serious love on Twitter, myself and several of my friends (all original New Girl fans) embarked on our own re-watches. And you know what? The show-induced serotonin is real, and we’re absolutely savoring it.

There is one dreadful thing about the show, though. Once you welcome these friends into your lives, you’ll never want to say goodbye. It’s the reason so many people have rewatched the show multiple times over the past few months, and it’s why every time I make it to the series finale I can’t help but shed some tears.