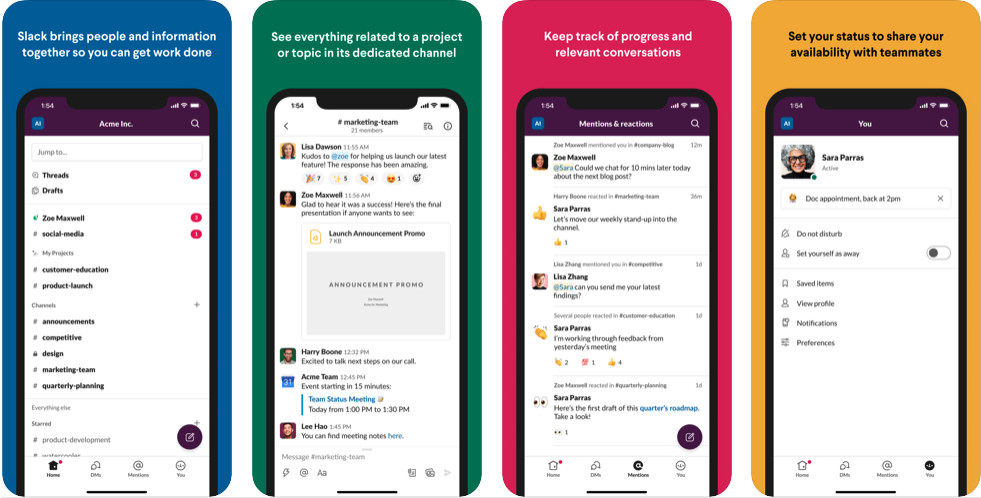 Slack announced a redesigned iPhone app with a new navigation bar at the bottom of the app in update notes today. However, it seems the redesign is still rolling out, even if you’ve updated to the latest version of the app — myself and another Verge colleague don’t have it yet, for example.

The new look appears to bring the iPhone app in line with the Android redesign that rolled out on May 5th. “Previously, it was complicated to get to the four main things people do on mobile,” Slack said in the App Store update notes. “We’ve fixed this with a new nifty navigation bar at the bottom of the app containing: a Home view for your sidebar, DMs, (still listed most recent first), Mentions (for quickly catching up), and You (because you’re great) (and also because setting your status/preferences on mobile needed to be easier).”

Here are some screenshots from the App Store of what the redesign looks like:

The update also adds a floating compose button in many places throughout the app as well as the ability to order your channels in the “Home” tab, much like how you can order your channels in Slack’s recent desktop redesign. You may also have to re-adjust some of your muscle memory when using the app, as some of the swiping behaviors have changed. “Now, swiping right will reveal your workspace and preferences, and swiping left will get you back to the last conversation you were in,” Slack says in the update notes. The update appears specific to the iPhone version of the app, meaning the iPad version remains the same for now.

If you don’t have the redesign yet, it seems likely the update will be available more broadly soon, since Slack has laid out all of the new features of the update in the App Store already.