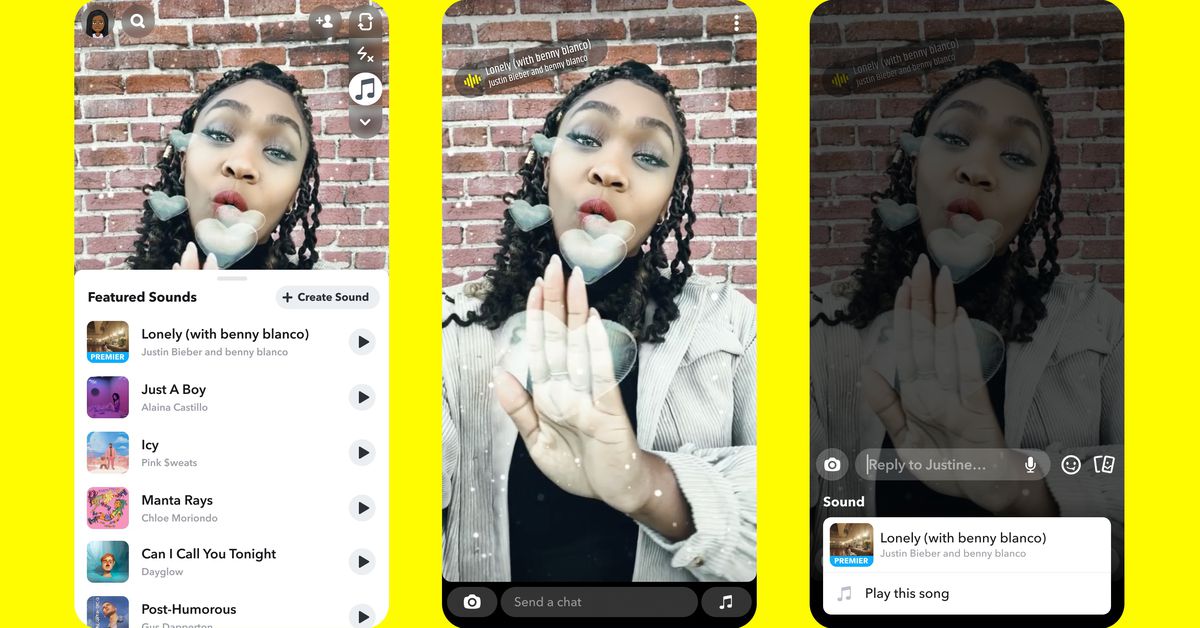 Snap is making good on its word to bring music to Snapchat and setting itself up to compete even more so with TikTok and Instagram. The company announced today that iOS users around the world will be able to include popular music in their snaps. It already brought the feature to people in New Zealand and Australia and said in August it’d bring music to more regions this fall. Snap doesn’t mention when sounds might be available on Android devices.

The company also says today that it’ll test allowing people to make their own sounds, and that feature will roll out globally in the coming months. Snap still won’t have a feed like TikTok that pushes viral music content, like dances or memes, to users and is instead focused on its partnerships with big publishers and tighter social webs between users.

If a person receives a snap with sounds, they can swipe up to view the album art, song title, and name of the artist. They can also tap the “Play This Song” link to listen to the full song on other streaming platforms, including Spotify, Apple Music, and SoundCloud.

Snap doesn’t say how big its music catalog is other than calling it “robust and curated.” It also says its licensing deals cover tracks from Warner Music Group, Universal Music Publishing Group, Warner Chappell Music, BMG Music Publishing, and others.

Overall, Snap is late to bringing music to its platform. Instagram introduced music stickers for Stories in 2019 and rolled out its direct TikTok competitor, Reels, in August. Meanwhile, TikTok has continued to gain traction with Snap’s loyal base of teen and young adult users, meaning Snap could lose its edge if these users stick to TikTok instead of checking or posting to Snapchat. Snap needed to at least bring music to its platform to keep pace with its competitors and stay relevant, even if only iOS users get access at first.