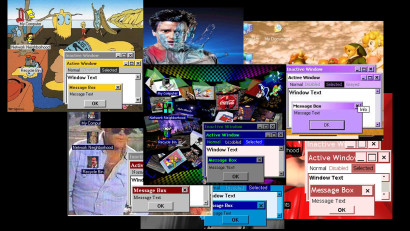 Two free-roaming archivists are wildly uploading hundreds of early Windows Desktop themes from the ‘90s and early aughts to the Internet Archive, populating the site with a trove of off-brand fan art you can install as your desktop wallpaper. Why? I do not know, but they have a captive audience. They probably would anyway, but social media has unraveled to the point where people are literally pissing their pants for entertainment. This is a gift.

Charmingly, in keeping with a lot of digital creations before a handful of players paved over the digital landscape, the README files contain little artist statements. “I decided to make this theme after trying several that I found on the internet that I was just not completely happy with,” writes Bill, of a 1996 Simpsons theme. “It’s not that they were bad or anything, I am just very particular about my Simpsons paraphernalia and they left me unsatisfied.” A parodist and devoted fan of pro wrestling from the 1980s felt compelled to “stand up and make a statement about the poor shadow this sport entertainment has become in the past few years” with cartoon speech bubbles over characters’ heads. A Star Trek: The Next Generation artist (1993) shared the dramas of a battle with a theme pirate nemesis.

“A dedication to the Fire Fighters of NYC” has no text, only a publication date of September 11th, 2001. Apparently somebody thought that wallpapering a desktop with the burning World Trade Center was a good idea. (A slightly subtler dedication features a crying eagle.)

Here’s a sexy 3D rendering of a satanic future lady lying in what looks like a swirl of automotive paint. Here’s Bad Boys the movie poster, with a psychedelic touch. Survivor, NewsRadio, Kids in the Hall, Half Baked, and a hot James Marsters from Buffy the Vampire Slayer all got wallpapers and customized recycle bins. (The uploaders have also kindly provided versions of the backgrounds that feature authentic-looking Windows desktop icons if you want to go beyond the pure unadulterated originals.)

Perhaps you have a CD-ROM of old themes lying around and don’t feel tempted to pee your pants or bake weird bread or wear a pillow as a dress? Head over to the Internet Archive and jump on this bandwagon. Please.