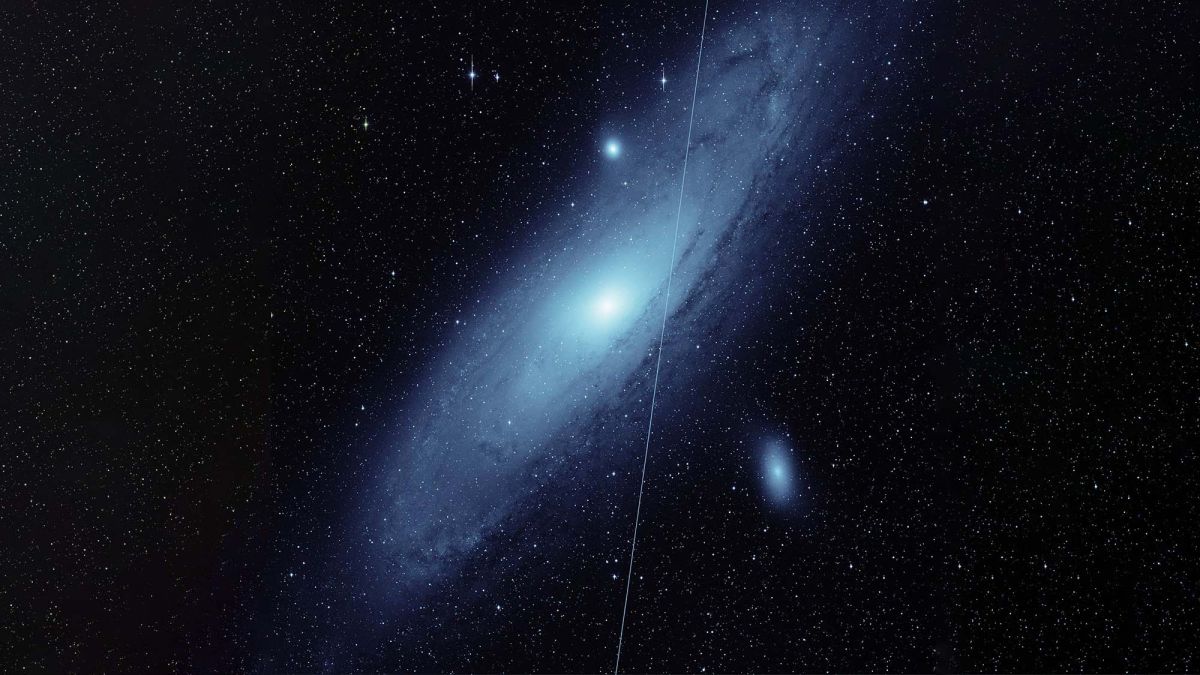 SpaceX’s Starlink satellite constellation has been concerning the world’s astronomers for years. Now, a new study published in The Astrophysical Journal Letters by astronomers at the Zwicky Transient Facility (ZTF) at Caltech’s Palomar Observatory shows just how bad the problem is – and how much worse it is likely to become.

Since 2019, SpaceX has been launching batches of satellites into low-Earth orbit (LEO) to build a constellation network that will provide internet access from any point on the globe. There are close to 1,800 satellites in orbit already, with plans for tens of thousands to eventually be deployed.

The problem is these satellites reflect light from both the Sun and the Earth over the horizon, which makes them visible in the night sky even to the unaided eye. While this can be a spectacular sight, or even a nuisance, for ground-based observers looking up at the stars, for ground-based astronomical observatories it’s a serious issue.

When the human eye stares at the night sky and sees a Starlink satellite, it looks like a particularly bright star moving across the sky. It only does that because our brain is constantly updating the visual data it’s getting from our eye to create that motion.

That is not how telescope observatories work, though. For these observatories to capture images of distant objects, they have to collect a lot of light over an extended period and then create a single image out of all that light. This is how they can capture such vivid imagery of objects that our eyes can’t detect on their own.

When a Starlink satellite passes through the view of these observatories, however, it doesn’t look like it’s moving. It appears as a bright line across the image, blocking out whatever is behind it. This is especially true of images taken during twilight hours at dawn and dusk, which are essential for identifying objects that might be between the Earth and the Sun, like near-Earth asteroids.

“In 2019, 0.5 percent of twilight images were affected, and now almost 20 percent are affected,” Przemek Mróz, the study lead author and a former Caltech postdoctoral scholar, now at the University of Warsaw in Poland, said in a statement.

“We don’t expect Starlink satellites to affect non-twilight images, but if the satellite constellation of other companies goes into higher orbits, this could cause problems for non-twilight observations,” Mróz added.

The reason twilight observations are so important is that most of the objects in the solar system orbit the Sun on a level plane. Some objects have far more eccentric orbits – comets, most notably – but all asteroids are leftover material from the Sun’s original accretion disk during the formation of the solar system.

So, asteroid orbits aren’t very eccentric and can sometimes intersect our own and hit the planet. Usually, this isn’t catastrophic, as the meteors (any space object that enters our atmosphere is defined as a meteor) burn up in the atmosphere and simply create a light show in the form of shooting stars or more spectacular fireballs.

It’s the bigger meteors we need to worry about and it’s vital we track as many asteroids as we can that might threaten life on Earth. That’s where twilight observations come in.

If the Earth is between an asteroid and the Sun, there’s no problem tracking it. It’ll be visible deep into the night and will even be reflecting the Sun’s light making it easier to spot. But that is only half of the sky. The other half is completely overwhelmed by the light of the Sun, making it impossible to observe anything during the day.

This makes it all-but-impossible to spot an object that orbits between the Earth and the Sun, as many asteroids do. It also means that we lose track of any object that might orbit further away from the Sun than we do if that object’s relative position is only visible during the day.

So how do you spot these objects? Fortunately, you can point a telescope towards the Sun’s position on the horizon just after sunset or just before sunrise and get a pretty clear view of these objects.

This allows us to keep track of the position of near-Earth asteroids and project their orbits into the future, thereby identifying possible threats far enough in advance to do something about them.

However, they are also tiny points of light in the sky, so telescopes have to take very long exposure images over multiple days for them to show up and for us to be able to determine their velocity and trajectories. And now, about 20% of these images are compromised by SpaceX’s Starlink satellites streaking across them.

Tom Prince, the Ira S. Bowen Professor of Physics, Emeritus, at Caltech and co-author of the ZTF study, notes that the problem isn’t too bad, yet.

“There is a small chance that we would miss an asteroid or another event hidden behind a satellite streak,” Prince said, “but compared to the impact of weather, such as a cloudy sky, these are rather small effects for ZTF.”

Unfortunately, the Vera C. Rubin Observatory, under construction in Chile, is far more sensitive than ZTF and will be far more susceptible to satellite streaks during its observations. With tens of thousands of satellites planned this decade, it will be disastrous for the new observatory’s work.

“There’ll be nowhere where you can take [the Vera Rubin] and point it without having one of them in the field of view,” Tony Tyson, a University of California, Davis astronomer and physicist working on observatory told Vox in December 2019.

What’s the big deal about streaks?

So what if there’s a white line across an image? Isn’t the rest of the image still perfectly usable?

Yes, the rest of the image is usable, but anything that was behind that streak is going to get missed. It might show up in a subsequent image, but without knowing its position in the first image, you can’t measure its speed or trajectory.

What’s more, SpaceX isn’t the only company looking to create satellite constellations. Companies like Amazon and OneWeb are planning their own constellations.

What happens when there are 100,000 satellites in LEO, all streaking across the sky during twilight and marring these vital observations? That’s how many are likely to be deployed within the decade between the various satellite companies. With that many satellites in LEO, every single observation taken at twilight is going to be affected. All of them. And it won’t be a single streak either, it could be dozens.

It’s possible that machine learning algorithms can help compensate by removing these streaks, but that has the potential to effectively smudge the data and create objects that aren’t there or erase objects that are.

It is also possible to coordinate observations with satellite operators so that observations aren’t taken when satellites are passing overhead. That’s easy enough, for now, but will it still be easy when there are a hundred thousand satellites in orbit?

Could Starlink satellites be made of a non-reflective material? Possibly, and SpaceX has already put a sun visor on the satellites and positioned their solar panels to reduce the amount of light reflected back at Earth. This has cut down their brightness considerably, but not enough to keep from streaking across observatories’ images.

Even if SpaceX took every satellite out of orbit and scrapped its Starlink plans, there’s nothing to stop a Russian or Chinese company from doing something similar. It’s not like a constellation of Chinese internet satellites will be any better.

So what is the solution? That is the big question, and no one has come up with a satisfying answer yet. Astronomers have turned to the UN to ask for help in regulating these satellites to protect ground-based observation. That won’t stop these companies from deploying their satellites, though. SpaceX alone puts a hundred or so satellites into orbit every month. There’s money to be made, after all.

“The mechanisms in [international] law that might have allowed us to avoid this, those wheels turn so slowly that by the time we would get to any consensus on a policy solution, this is all going to be over,” said John Barentine, an astronomer and the director of public policy at the International Dark-Sky Association. “I just think that it’s a numbers game that astronomy probably cannot win.”

What it means to have the night sky taken from us

For all the purported benefits to humanity – and don’t get me wrong, bringing true broadband internet speeds to developing countries and rural areas is an unquestionably good thing – no one should forget that SpaceX, Amazon, and others aren’t doing this out of altruism.

They aren’t bringing free internet service to the world. They will be charging for it and presumably making profits off its investment in their satellite constellations. Making money is the whole point of the enterprise, twilight observations of near-Earth objects or even just simple star-gazing be damned.

“Satellite constellations…strike at the core of humanity’s scientific and cultural relation to the night sky, affecting millennia-old sky traditions and cultural practices across all nations around celestial cycles and the night sky,” Aparna Venkatesan, James Lowenthal, Parvathy Prem, and Monica Vidaurri wrote in a study published in Nature Astronomy in November 2020.

They too advocate for an international consensus to protect the night sky for future generations: “This approach requires a radical shift in the policies of international regulatory bodies towards the view of space as an ancestral global commons that contains the heritage and future of humanity’s scientific and cultural practices.”

With little regulation and no international rules governing satellite constellation deployment, it feels like screaming into a void, one that will soon be charging you money for the privilege of doing so. Whatever happens, we should never forget what is being taken from us and why.