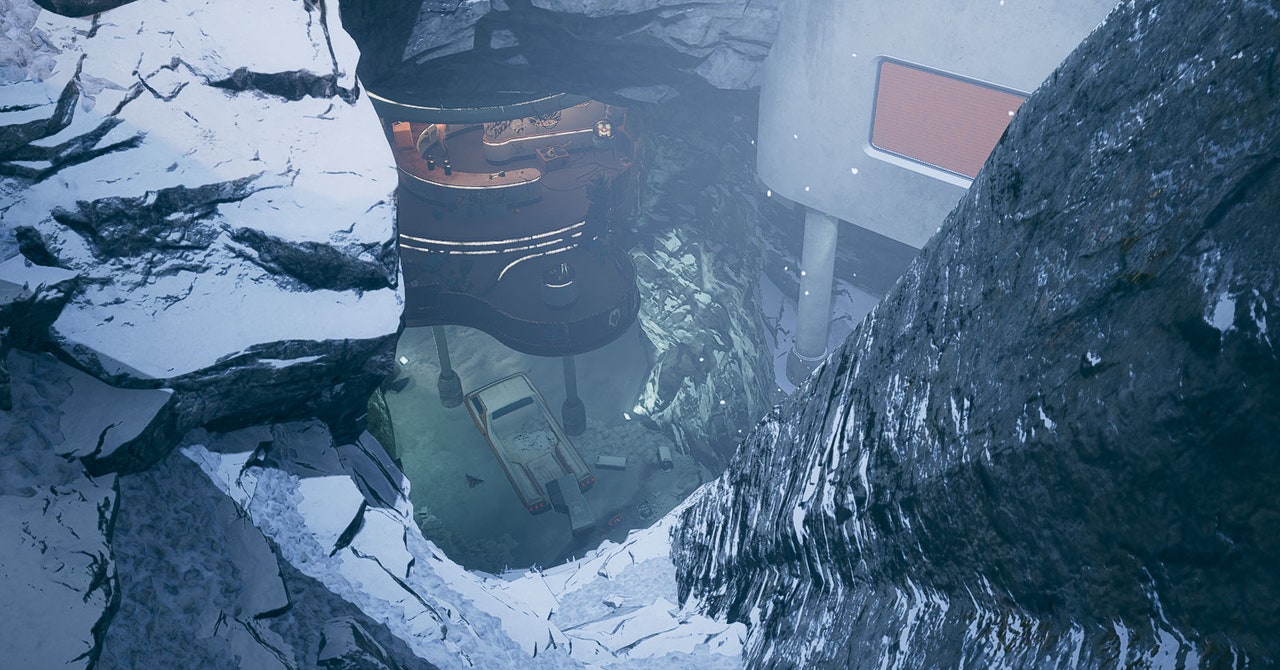 “Tarantino is another influence,” Mitton continues. “He covered the ’60s, and he has these incredibly colorful, impactful characters. The aesthetic is so simple, and we remember all these scenes and characters. Other films can be a little more muddy. Since Deathloop is all about remembering, I thought it was a good support. To progress through the story, you have to remember and you have to bring your memories from one loop into the next. So having that simplicity was important. We didn’t want a complicated game, visually-speaking, with too much going on.”

Deathloop’s island is a strange mix of modernist architecture, Scottish stone castles—which will seem familiar to visitors of Dunwell from Arkane’s previous game Dishonored—and an austere, treeless landscape. On top of the Faroe Islands, which Arkane has mentioned in previews, Mitton tells me that they wanted to capture the isolated landscapes of Northern Scotland (as shown in this short film of Scottish trials cyclist legend Danny MacAskill). “At the same, time we were looking at other places with cold environments. Mostly around the two poles,” Mitton explains. “Obviously I can’t just buy airline tickets, so I would go on Google Earth and use the Street View to walk around.”

Several places stood out to Mitton, such as the Falkland Islands near Argentina. “The structure of the mountains there are striking. It’s very desolate, treeless, and not particularly inviting. There were also places in the north of Russia—petrol extraction stations that are extremely desolate and need an entire week to travel there. There are even some towns built in the ’60s there. They almost look like something from Half-Life 2. In them you have all these shops and casinos, because when you go there, it’s for an entire year, and planes and boats aren’t just coming and going.”

Arkane was keen to capture this idea of an extremely isolated but relatively built-up settlement. As well as having its share of villainous lairs, concrete bunkers, and secret laboratories, Blackreef has its own funfair complex, a rooftop bar, and even a plush, renovated castle that comes with a dance floor and comedy club. It’s also crawling with the hedonistic Eternalists, characters keen to make the most of the recurring time loop by throwing an everlasting, hallucinogen-fueled party.

“It’s like in the movie The Thing: Events take place far away from the rest of the world, and you’re only focused on what’s going on there,” Mitton says. “We wanted to set things in a place where no one would want to go on vacation, and then build our science fiction and narrative on top of that.”

The Color of Architecture

In terms of architecture, Deathloop builds off what Arkane began with Dishonored. “Our goal with Dunwall was to make it very cold and dark,” Mitton says. “With Deathloop, we wanted to contrast that with the ’60s and with color. Color started going on the walls, the interiors, the island’s NPCs. It kind of shows their internal lives; they want to live an eternal life and have this eternal party.

“Every day is going to be a party, you can kill people or die, and it doesn’t matter. Everything is very lighthearted, and we wanted that to be obvious. So we painted entire buildings, a bit like some of the pubs you see in England, which can be quite graphic. There’s also the film High Plains Drifter, with Clint Eastwood. There’s a scene where he comes to protect a village, and everything in the village is painted red, right in the middle of the desert. It’s really beautiful, and we thought, well let’s keep going on like that!”