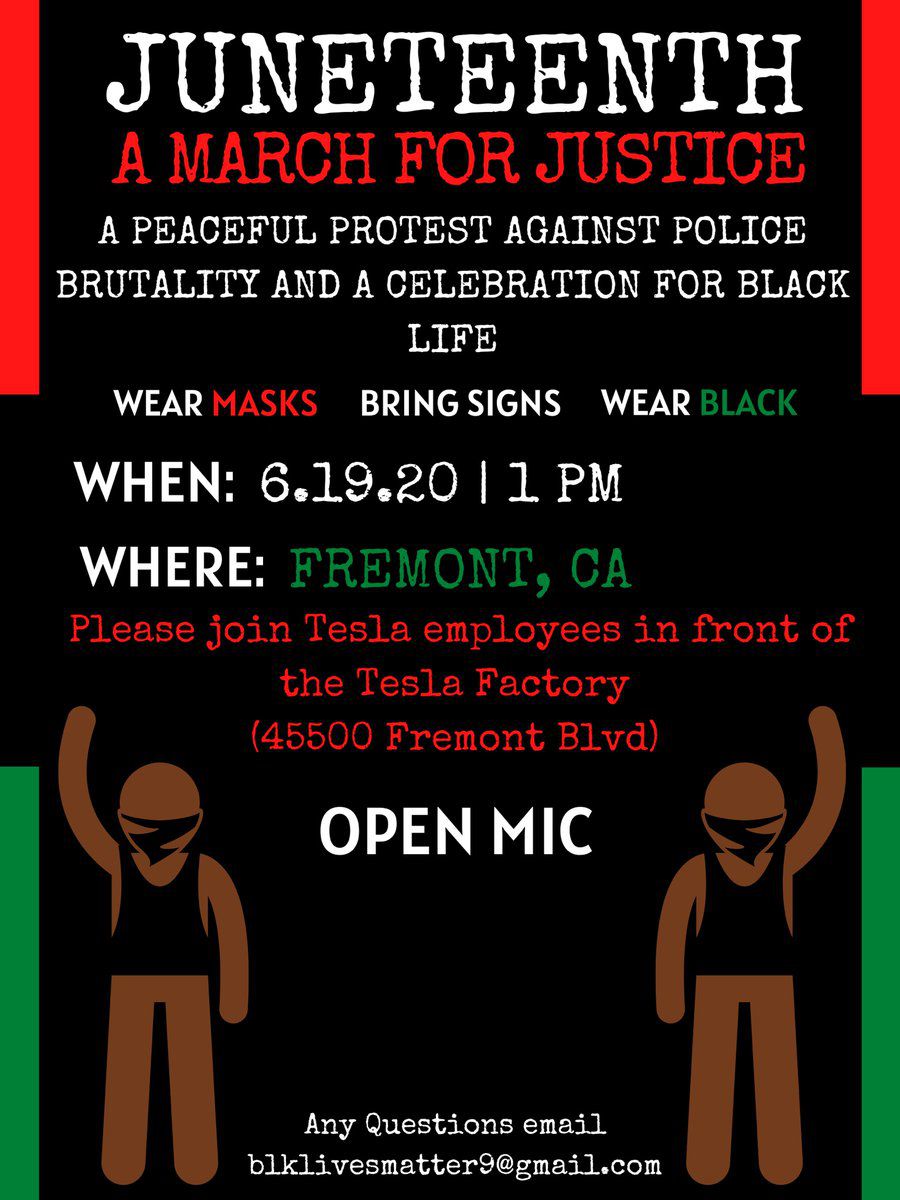 A small group of Tesla employees and community organizers are holding a rally on Friday in the parking lot of the company’s Fremont, California car factory on June 19th, or Juneteenth, the holiday that commemorates the end of slavery in the United States. The people behind the protest want Tesla employees and people from the community to “Stand with Tesla Workers for Black Lives,” according to a Facebook event.

The rally comes as people around the nation continue to take to the streets to protest police brutality and racism, and as a number of tech giants like Uber and Twitter have announced that they’re making Juneteenth a paid company holiday.

“This was brought on by a group of people who are not only calling for an end to police brutality, but are also calling to defund the police,” the group said in a statement to The Verge. “We are tired of the unjust killings of people like George, Breonna, Ahmaud and every other countless life that was lost in part due to police brutality. We are tired of the lynchings and racism that’s happening around this country every single day, we are tired just like everyone else is. We decided on June 19 because it’s a day that is recognized in which slavery was ended, but truth be told, we’re still fighting the war to end racism, mass incarceration, acts of violence by police, and so much more.”

“it’s time we act and show support not only within the company, but as a community.”

The employees who put together the rally are not comfortable revealing their identities, according to one who spoke to The Verge on the condition of anonymity. Earlier this week, a different Tesla employee was given a termination notice after organizing a protest at the Fremont factory in response to the way the company has handled COVID-19. (Tesla’s workforce is not unionized.)

The organizers of Friday’s rally say they don’t believe that Tesla’s response to the recent nationwide protests has been adequate, either.

“We know we work for a big company like Tesla and are aware of the email Valerie [Workman, Tesla’s North American HR boss] sent out, but it’s more than just listening, it’s time we act and show support not only within the company, but as a community, as we continue fight to end these everyday battles,” they wrote.

In that June 9th email, a copy of which was obtained by The Verge, Workman announced that Tesla was launching a “Listen to Understand” series for employees that will “allow us to come together, listen to our colleagues’ stories, share learning resources, and help us all better understand new perspectives.”

“Our team’s efforts won’t end here. We remain committed to championing diversity, equity and inclusion for our people, and in our business and communities,” Workman wrote. “As we revise our 2020 Diversity & Inclusion Plan to incorporate more employee feedback into our programming, we stand committed to this work and we ask for your commitment too.”

Tesla did not respond to a request for comment.

The Tesla employees originally planned to to gather people at the factory and perform a five-mile march to Fremont City Hall, and put out a call to musicians, dancers, singers, and artists to join them, according to an earlier version of the poster they put together. But the employee who spoke to The Verge said the group ultimately decided that a the march would be “too long” and “might deter people.”

Now, they’re asking people to gather at the factory by 1PM PT for what the poster describes as a “peaceful protest against police brutality and a celebration for Black life,” with an “open mic” format. Attendees are encouraged to wear black, bring signs, and wear masks as well. The employee who spoke to The Verge said that they asked former Tesla employees to speak at the rally, too.