Tesla Factory Inspected by Police While It’s Supposed to Be Shut Down, Elon Not Arrested 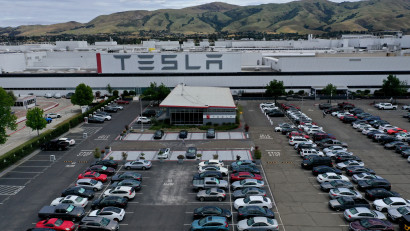 The Fremont Police Department this week conducted an inspection of Tesla’s Fremont, California, factory to assess the facility’s safety measures and its degree of operation, a police spokesperson said, the latest development in the county’s standoff with CEO Elon Musk over the latter’s very dramatic, incredibly stupid refusal to comply with an order to cease production amid a global health crisis.

For those who haven’t been following along at home, Musk has for some time now been publicly melting down over lockdown orders—not only tweeting bad takes perpetuating myths and misinformation about covid-19 guidance, but also requiring that employees continue showing up for work in defiance of orders from health authorities. (The company did eventually cease operations in March.) Earlier this week, Musk tweeted that the electric car company would be “restarting production today” in violation of an order by health authorities in Alameda County—which Musk is suing over the measure—courageously adding that if anyone was arrested on-site “that it only be me.” Brave!

Alameda County officials on Tuesday quote-unquote “agreed” to allow Tesla to reopen as soon as next week, but only if specific safety measures and social distance protocols are met—something some workers have said is not possible given the nature of the work. A spokesperson for the Fremont Police Department told Gizmodo by email that the department paid a visit to the Fremont factory on a request from the Alameda County Public Health Department to ensure that those measures—which included physical distancing, universal face coverings, and screenings—were being enforced. The spokesperson said that police had full access to the facility and that based on previous visits, Tesla is still not fully operational. CNBC first reported on this week’s police inspection.

The spokesperson said that it has not yet been asked to open an investigation despite the company’s defiance of the order in Alameda County. The department will be passing on its observations to the county’s health department, and if it’s learned that Tesla is not meeting agreed-upon measures, the two parties will discuss how “immediate compliance could be obtained.” The spokesperson added that if compliance isn’t possible, the situation would head to the county’s district attorney’s office, which would then make a decision about whether to pursue charges. In other words, if Elon Musk violates the law, something can surely be worked out. And if he does it again… well, certainly something can be worked out—but there might be consequences!

The police spokesperson told Gizmodo that the department is “not taking enforcement action” because there are “good faith talks with Tesla regarding their safety plans” that are still ongoing.

“The Health Order is the County’s and we enforce on their behalf, so it wouldn’t be appropriate for us to begin an investigation while they were having a dialogue with the company,” the spokesperson said. “They notified us that they were in talks and so we ensured we would assist, if and/or when needed. The County’s Order states the penalty could be a citation or misdemeanor, but they also clearly say compliance is the goal and it’s not intended to be punitive. We would not have the actual ability to close the doors or arrest any individual without the District Attorney’s willingness to file charges.”

Tesla did not immediately return a request for comment.

To top off an already dangerous work situation for Tesla workers, the company is evidently now threatening furloughed workers by claiming that failing to return to work could affect their unemployment benefits, a situation characterized by one Tesla employee who spoke to the Guardian as Tesla using “intimidation and threatening tactics.” It’s almost as if the guy infamous for his public temper tantrums requiring varying degrees of crisis management shouldn’t be allowed to be making the calls about when it’s safe for his employees to return to work, and yet…