Tesla’s Cybertruck Could Be Ripped, Mean, and Super Green 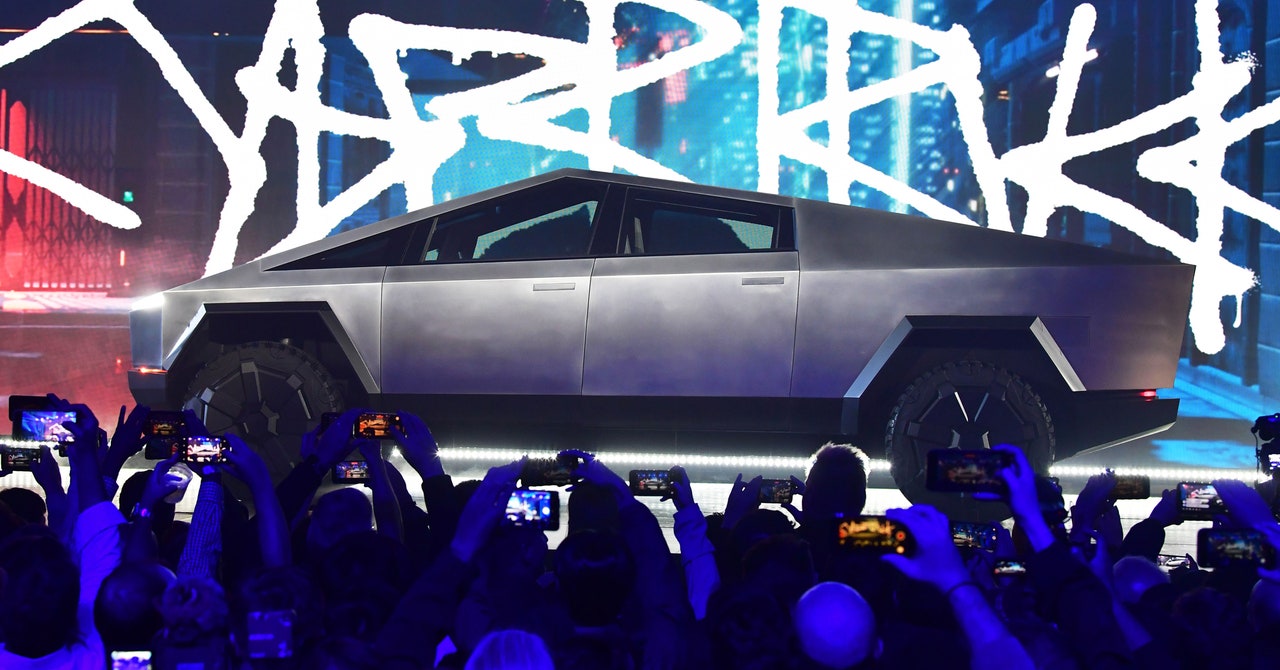 Cyberpunk. That’s the word Elon Musk applied to his ripped, brutalist pickup truck that was, it’s fair to say, nothing like anything anyone expected. The Cybertruck shocked the automotive world last fall and invoked a very different ethos than Tesla’s sleek sedans and SUVs. It also engendered strong emotions. Many thought it looked custom-tailored for murdering wetlands and mowing down pedestrians. (Others just thought it was cool.) Look again and you may see something different. Done right, the Cybertruck could end up being Tesla’s greenest vehicle yet. After launching the era of private space flight last week, Musk could, thanks to the craggy architecture of this wedge-shaped beast, debut the world’s first circular car.

For over a decade now, Tesla has been pushing the envelope in both performance and sustainability. If the company wants to maintain its position as an environmental leader, the Cybertruck is the perfect vehicle for those ambitions. That’s because, while electrification is a potent tool for reducing CO2 emissions, it’s not the final step towards decarbonizing the auto industry.

Levi Tillemann is the author of The Great Race: The Global Quest for the Car of the Future. He founded Valence Strategic and was an adviser to the Department of Energy in the Obama Administration.

On an apples-to-apples basis, an electric car’s per-mile emissions are roughly 25 percent lower than a gasoline-powered vehicle with today’s mix of electrical resources. They do much better in areas with a low-carbon energy mix, like California. Yet if you strip out coal, oil, and natural gas, and only leave the zero-carbon electricity from wind, solar, or nuclear energy (a work in process), you’re still left with a vehicle that produces almost a third the emissions of a gasoline-powered vehicle. By today’s standards, the hulking, super-performing Cybertruck is still extremely efficient—especially in operation. But on a lifecycle basis, Tesla can do better.

The Cybertruck presents a golden opportunity to pioneer technologies that eliminate residual emissions from automotive manufacturing. The global auto industry consumes 81 percent of the world’s rubber output, 23 percent of its aluminum, 13 percent of its steel, and 6 percent of its plastic. Tesla is well aware of the problem, which is one reason it has gone to great lengths to power its Gigafactory by renewable energy.

But while batteries help reduce cumulative emissions, they increase manufacturing emissions substantially. “Electrification is a win from an environmental perspective,” said Eric Hannon, a partner in McKinsey’s automotive practice. “But rolling off the lot a vehicle like the Cybertruck will likely have produced about three times the manufacturing emissions of a comparable vehicle,” like a Ford F-150.

These manufacturing emissions are not small potatoes. If humans are going to keep their cars as well as a survivable climate, manufacturing emissions must plummet. The most obvious way to achieve this is through designing cars to be part of a so-called circular economy–wherein products are reused and recycled, rather than thrown away. At the World Economic Forum, we call this concept the circular car. My role is to work with the automotive supply chain, mobility providers, and policymakers to make circular cars a reality.

Automotive circular manufacturing is increasingly a top-of-mind issue for policymakers and regulators–especially in the European Union. Building cars that are, in essence, infinitely recyclable is a big opportunity.

The Cybertruck’s raw, rugged design could be perfectly suited for efficient reuse. The same elements that will make it cheap to manufacture could also make it easy to take apart at the end of its life.

Partially degraded batteries can be transitioned into second-life applications. As intermittent sources of energy like wind and solar continue to drop in price and make up a bigger proportion of global energy supply, used automotive batteries can play an important role in keeping the lights on. And selling that expensive battery pack can help EV owners recoup part of their investment.

Properly designed, many components would be able to be reused after inspection—and maybe some light refurb. Other elements could be recycled and processed into automotive components again. That would be a big improvement on today’s system. When most cars are taken to a junkyard today, they are crushed and shredded. That process contaminates high-quality steel with copper and other elements—which means it can only be reprocessed into lower-quality steels. If you could open the Cybertruck like an oyster, pull out the battery, sort the guts, and send the shell back to the furnace, much of the vehicle could be recycled and reprocessed indefinitely. Tesla could create relatively pure materials streams of uniform grade—perfect for recycling.