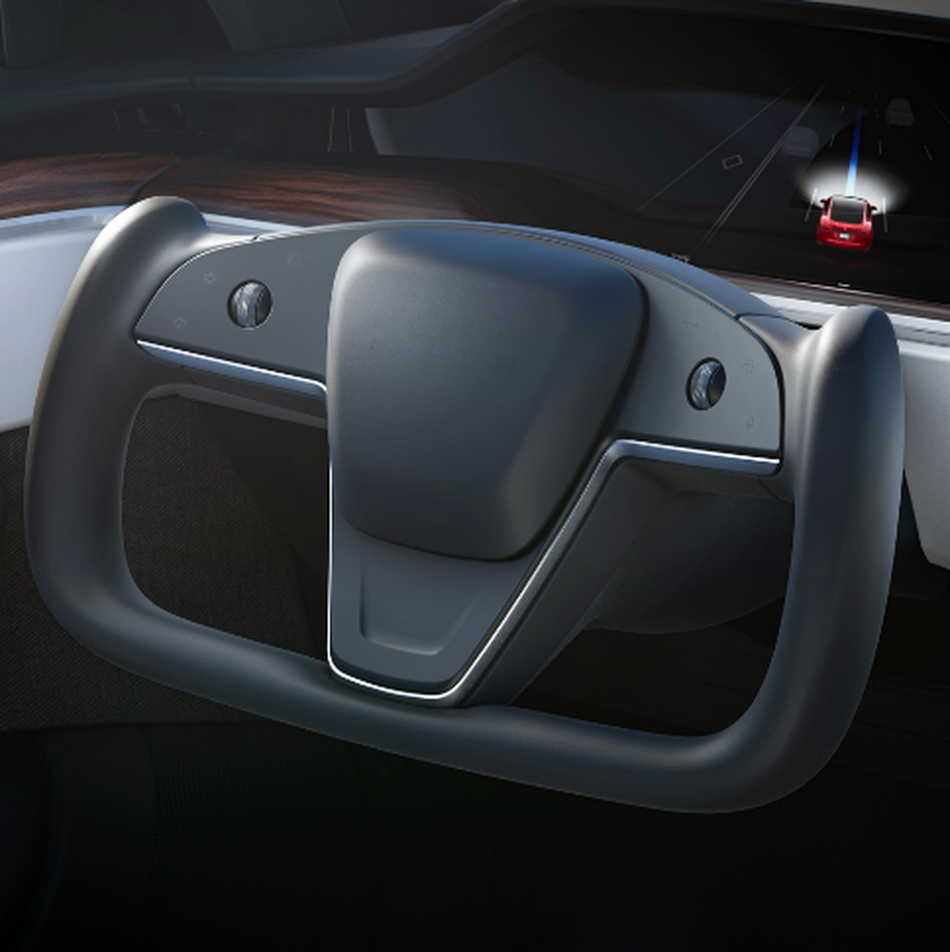 This isn’t a yoke.

On Wednesday, Tesla rolled out the new interior look for its refreshed Model S and X electric cars. Both feature a new steering wheel design and touchscreen layout.

Tesla is calling the new wheel a “stalkless steering yoke,” meaning there’s no stalk to press for the turn signal or to change drive modes. Tesla CEO Elon Musk said on his company’s earnings call Wednesday that the new Model S will be available next month, starting at $79,990 for the most basic version — just $10,000 more than the old version. The revamped Model X will follow later in the year.

“It’s a tremendous improvement over the prior version,” Musk said about the Model S on the call.

Here’s what the Model S steering wheel used to look like compared to the new yoke design, which many are calling “half a steering wheel.”

The redesign also changed up the Model S and X displays. There are now three screens with a completely different alignment for the front center screen. What used to be a vertical touchscreen is now a horizontal 17-inch screen. There’s still a second screen behind the wheel, which Tesla removed in the Model 3 and Y.

A new 8-inch screen in the back of the Model S and X will let passengers play games or watch videos.

With the emphasis on screens made for entertainment and gaming, and a steering wheel that looks like a video game controller, the online response was predictably divided. Some either embraced the new look or couldn’t stand it.

As someone currently testing #FSDBeta – I activate signals or manually steer very little. Most of my steering wheel input is via the scroll wheels. Even if the software never gets better than current beta this yoke steering wheel is fine and actually makes more sense. @elonmusk

How do you drive with a half steering wheel ??

I really like this new steering wheel. Looks amazing overall 😀

The Model S and X are Tesla’s two original cars. But once the more budget-friendly Model 3 and Y were released in the past few years, sales slowed for the Tesla classics. During all of 2020 Tesla delivered 57,039 Model S and X vehicles combined, compared to a combined 442,511 cars for the Model 3 and Y.

The classic refresh includes other slight changes to the exterior, most noticeably the glass roof on the Model S.

The Model S also has a long-awaited variant available: a tri-motor Plaid+ version with more range and better performance. The top-of-the-line variant costs $139,990 but will come with a more than 520-mile range. (The “regular” Model S Plaid has a 390-mile range.)  It’s supposed to start being delivered to customers later in February.

During Wednesday’s earnings call, Musk noted that the Model S and Model X both have Plaid versions (starting at $119,990) that are faster, but not as fast as the Plaid+. The Model S can go from 0 to 60 mph in under 2 seconds. Tesla claims that’s the quickest acceleration “of any production car ever.” The top speed is 200 mph.

Musk — who’s not known for his modesty — called the new Model S: “The best car of any kind of any price available in the world today.”