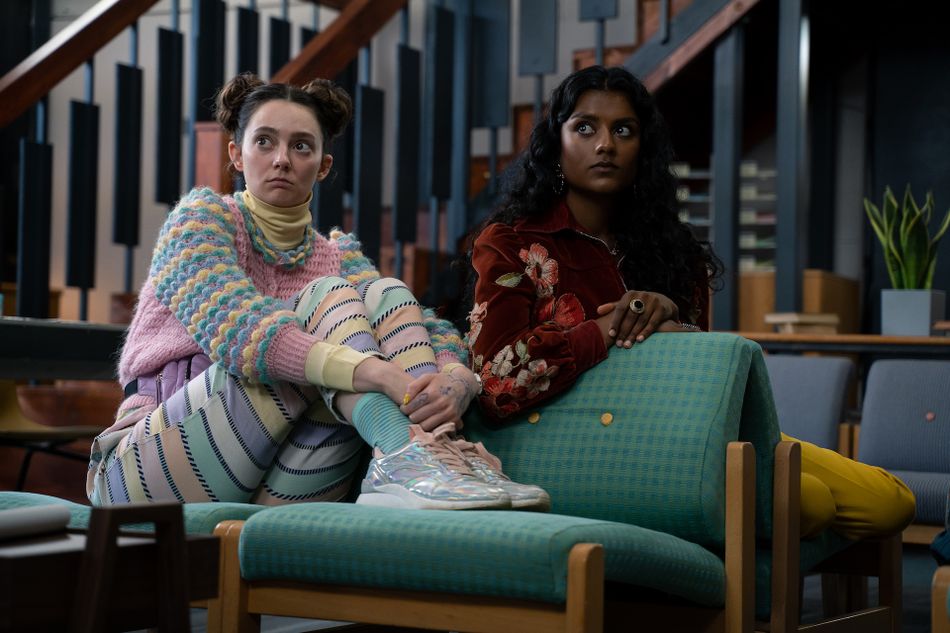 Because time is an ever-expanding and contracting construct, we’re already halfway through 2020. Sounds fake, but it’s true. The first six months of this year included some stellar episodes of television, including a perfect send-off for NBC’s The Good Place, a prescient and political episode of Ramy, and a Parks and Recreation reunion that addressed the coronavirus pandemic while bringing joy to its many fans. Listed here are those episodes, as well as the other seven best episodes of TV aired so far this year.

The best parts of Sex Education episode 207 (and indeed, of Season 2 at large) are less about sex and love and more about friendship and camaraderie. Six of the show’s female leads are locked at school a la Breakfast Club, forced to figure out what binds them together as women and concluding, heartbreakingly, that it is unwanted sexual advances. It’s fascinating to see Maeve, Aimee, Ola, Lily, Olivia, and Viv in the same scene, amplifying the difference in how they manifest and engage with their female experience but underscoring that it does indeed connect them.

The final scene, in which the other five accompany Aimee to the bus stop she now associates with her assault, provides comforting catharsis. Yes, these young women may have little in common, but you better believe they’ll show up for each other. -Proma Khosla, Entertainment Reporter

2. The Good Place, “Whenever You’re Ready”

The Good Place will forever be remembered as a show that didn’t let critical and audience acclaim trick it into overstaying its welcome. After four wonderful seasons, the philosophical comedy about the afterlife wrapped its storylines with a 90-minute finale that gave each of its characters a worthy sendoff and made just about everyone cry their forking eyes out.

“Whenever You’re Ready” dealt with what it means to find peace, purpose, and reconciliation in a fully reconstructed afterlife that offered everyone the chance to get into the “good place” after many lifetimes of self-reflection. Its overall message of getting better and doing better by discovering what humans owe to each other was also beautifully illustrated in the finale’s final moments. Like Chidi’s morality lessons, The Good Place ended precisely when it needed to, and its complete story culminated in one of 2020’s best episodes of TV.

3. Kidding, “Up, Down and Everything in Between”

Part of Kidding‘s brilliance is its ability to stack profound emotional moments on top of some of the balls-out, weirdest visuals currently airing on television. In the second episode of its second season, Kidding transformed a liver transplant between series protagonist Jeff (Jim Carrey) and Peter (Justin Kirk), the man he hit with his car in a fit of blacked-out rage, into a puppet-filled musical extravaganza. With choreography from Mandy Moore and music by composer Alan Schmuckler, “Up, Down, and Everything in Between” is a 30-minute musical comedy masterpiece that unearths Jeff’s deep emotional repression while making room for a chorus of foul-mouthed gherkins and a guest singing role for the iconic Dick Van Dyke.

Where to watch: Showtime

The entire Unorthodox miniseries is gripping, but the first of its four parts has a pulsing magnetism to it that wraps itself around the viewer to bring them into a world that many may be aware of but most don’t really understand. The series focuses on Esty Shapiro, a young woman who flees her ultra-Orthodox Hasidic Jewish community in Brooklyn to Berlin in order to start a new life. The first part of Unorthodox focuses on Esty’s confusing-yet-freeing first days in Berlin juxtaposed with her husband’s frantic scrambling back in Brooklyn and flashbacks to her life in the Satmar community leading up to her wedding.

Unorthodox is a fascinating and heart-pounding story of family, community, and individualism with incredible performances and attention to detail inspired by a true, similar story. -Kellen Beck, Entertainment Reporter

“… had to be on my best behavior” isn’t necessarily the most hilarious episode of Never Have I Ever, or the most tearjerking, or even the most dramatic. But it might be the most Never Have I Ever episode of Never Have I Ever. As Devi and her family welcome a potential suitor for Kamala, the episode dances between wacky comedy (the panicked efforts to sneak Steve out of the house), tentative romance (Paxton’s visit and Kamala’s choice), and wrenching tragedy (Devi’s flashbacks to her father’s death). It is, in other words, “the usual Devi nonsense,” and we can’t get enough of it. -Angie Han, Deputy Entertainment Editor

6. “A Parks and Recreation Special”

The Parks and Recreation quarantine special is the biggest unexpected gift of 2020, hands down. The show ended its successful run in 2015 and, by all appearances, that was it. Our time in Pawnee with Leslie Knope, April Ludgate, Andy Dwyer, and all the rest was finally, sadly over. Then 2020 came along with a pandemic and social upheaval in the midst widespread mistrust in the U.S. government. It turned out to be perfect timing for a Zoom-esque return to everyone’s favorite fictional Indiana city. The episode is like a love letter to every Parks and Rec fan, and it ends on such a pitch-perfect note that I challenge anyone who watches it to not burst out into tears. It’s simply impossible. -Adam Rosenberg, Senior Entertainment Reporter

The Great‘s entire first season was a wild, ahistorical retelling of Catherine the Great’s rise to power in 18th century Russia, and its tumultuous finale was the show’s crowning moment. Elle Fanning and Nicholas Hoult brought intense pathos to the final confrontation between Catherine and her husband Emperor Peter, and much of the season’s rising tension finally exploded in a bloodbath that took out beloved (and some not so beloved) characters in one raging, violent swoop. Top the finale off with Catherine’s absolutely incredible pink dress and a well earned appearance from the French philosopher Voltaire, and you have The Great’s unabashedly great finale.

“Houston” follows Alice, a soldier in Phyllis Schalfly’s culture war, behind enemy lines in the form of the 1977 National Women’s Conference — only to discover, to her shock and horror, that she doesn’t entirely hate it. Sure, some of that is the drugs: Alice’s experience of the convention is a mind-bending trip that alternates between grotesque and gorgeous, and it’s just plain fun to watch a giggly Sarah Paulson eat from a plate on her chest as she lies down in the gay lounge. But the reverberations of that journey are felt far beyond that one night. Alice emerges from the experience a changed woman — and in doing so, comes to represent all the unnamed women who found themselves transformed by an era of change and awakening. -AH

In one of the most visually stunning episodes of Insecure to date (directed by cinematographer Ava Berkofsky, so it’s no wonder) sees exes Issa (Issa Rae) and Lawrence (Jay Ellis) meeting up for drinks, now years removed from their epic break up despite the awkward encounters sprinkled in the intervening years. The time apart tested both of them, leaving two far more mature and successful individuals in front of us now than the floundering couple of Season 1. They meet for drinks which turn into dinner which turns into a walk and ends up at Lawrence’s apartment, each step of the journey sexually charged in that signature Insecure style that leaves us both cringing in fear and ecstatic with anticipation. – PK

Where to watch: HBO Max

Maysa (Hiam Abbass) finds herself in a situation she’s ill-equipped to handle gracefully when she picks up a non-binary passenger in her Lyft. Dena (May Calamawy) scolds her mom about pronouns and tells her to leave it alone, but Dena tracks down the passenger anyway and only makes matters worse. The problem, Dena tells her, is that she insists on saying something in situations where she would be better served to say nothing. Words are powerful, and potentially hurtful, and Maysa loathes the idea that she could be as intolerant or verbally uncontrollable as Trump.

This leads to one of the series’ best scenes: Maysa’s citizenship ceremony, in which she launches a quiet but determined verbal tirade against the President of the United States while everyone around her vows to defend the U.S. and its values. “I will not be like you,” Maysa spits. “I will vote you away, you peace of fucking fuck-shit. I’m here to stay, bitch.” – PK