The Meme-Fueled Rise of a Dangerous, Far-Right Militia 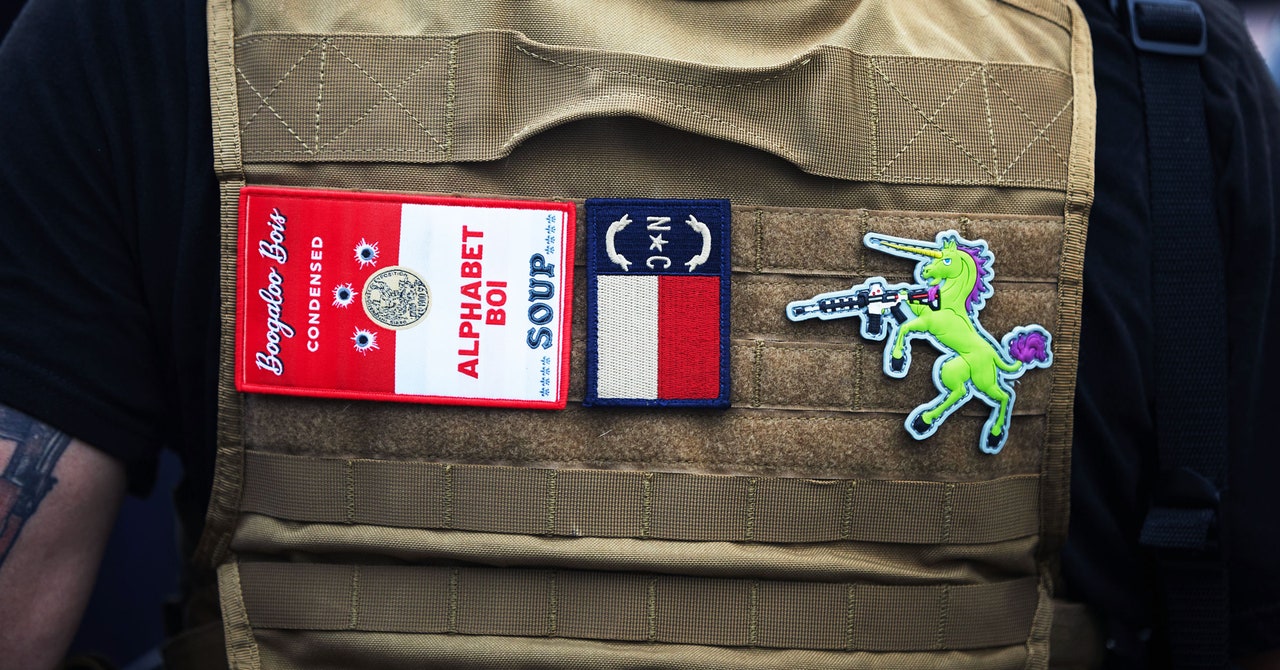 The Boogaloo Bois dress in Hawaiian shirts, stitch igloo patches on their clothes and bags, and spend their days slinging pro-gun memes back and forth on Reddit, Discord, and Facebook. They have also been linked to a plot to spark unrest at George Floyd protests in Las Vegas with firebombs, and to the deaths of two law enforcement officers in the Bay Area. Damon Gutzwiller was a Santa Cruz sheriff’s deputy, and Dave Patrick Underwood was a federal security officer in Oakland. Authorities allege the same man, an Air Force sergeant, killed both of them. The suspect had a patch featuring an igloo and Hawaiian print stitched to his ballistic vest, and, on the hood of a car he had stolen prior to his arrest, he wrote the word “boog” in his own blood.

The sudden burst of violent extremism this summer is the first most people have heard of the Boogaloo movement, a vague and amorphous far-right militia loosely bound together by anti-government and pro-gun sentiment and memes. But if you scan back through photos of America’s most contentious 2020 gatherings, you’ll start to spot them. Angry white men sporting Hawaiian shirts and assault rifles materialized at a massive gun rally in Richmond, Virginia, in January. Then, this spring, they appeared in greater numbers during anti-quarantine protests across the country, from Washington to Tennessee to New Hampshire.

As protests sprung up following the death of George Floyd, who died while in the custody of Minneapolis law enforcement, they began showing up at those gatherings as well. “Some folks who identify as Boogaloo Bois share anti-police sentiments. Some are acting as self-appointed security, vowing to protect businesses from protesters,” says Robert Futrell, who researches far-right extremism at the University of Nevada, Las Vegas. “Some say they’re monitoring the protests. Some are white supremacists trying to antagonize protesters.” If you find that position confusingly self-contradictory, you’re not alone.

The movement’s use of the word “boogaloo” stems from some very old, obscure jokes about the 1984 breakdancing movie Breakin’ 2: Electric Boogaloo. In places like 4chan, the “joke” became referring to the second Civil War—which right-wing extremists have been prophesying, calling for, or trying to incite for decades—as Civil War 2: Electric Boogaloo. Over the last few years, that meme morphed, and “boogaloo” became a sly codeword for civil war. Much like the real Civil War, Civil War 2 is either a chance to strike back against government tyranny or a race war, depending on who you’re talking to. “If the extreme right is a Venn diagram, one side is white supremacists, and the other is anti-government groups,” says Futrell. The term “boogaloo” sits in the middle, as do the Boogaloo Bois.

Megan Squire, a computer scientist studying online extremism at Elon University, started seeing white supremacists use the term to refer to a race war on the messaging app Telegram last summer, and watched it morph from Boogaloo to sound-alikes like Big Luau (hence the Hawaiian shirts) and Big Igloo (hence the patches) in an explicit effort to throw would-be censors off the scent. “Those white supremacist groups love the fantasy that the FBI are watching their chats. They are constantly talking about that,” Squire says. Then, in September 2019, she saw “Big Luau” and “Big Igloo” make their way back into gun forums motivated by anti-government anxiety. By the time the anti-quarantine protests hit during the Covid-19 lockdowns, people were making Boogaloo merch. “It’s literally a meme at this point,” Squire says. “As long as you have a Hawaiian shirt, then you’re in it, you’re doing it.”