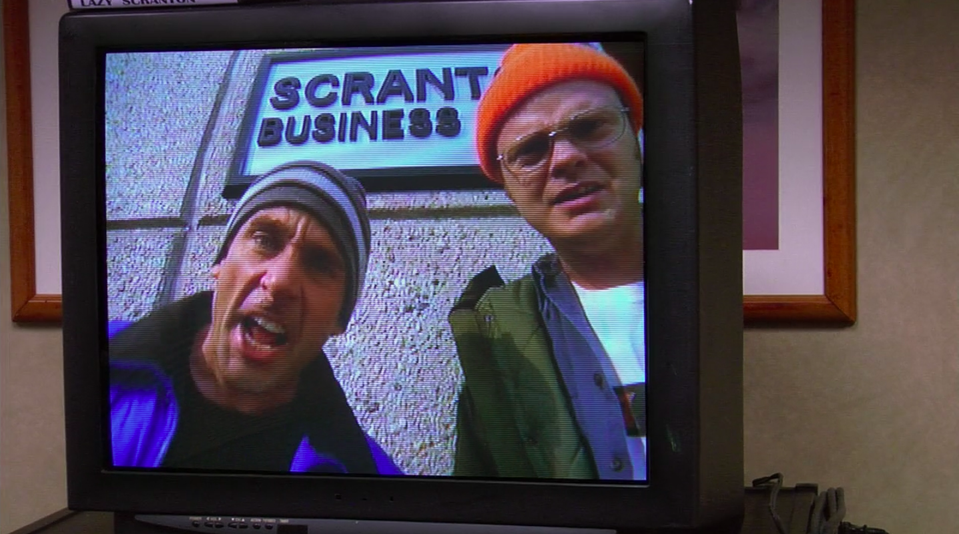 On the latest episode of the Office Ladies podcast, former co-stars Jenna Fischer and Angela Kinsey talked with two special guests about Season 3, Episode 8, “The Merger.” In this episode, Dunder Mifflin’s Stamford and Scranton branches finally merge, which means Michael has a whole new audience he can dazzle with his… comedy.

The episode features some of Michael Scott’s best attempts at recreating SNL bits, including the fan-favorite “Lazy Scranton,” which Fischer and Kinsey reminisced on with episode writer Brent Forrester and episode director Ken Whittingham.

“Should we talk about Lazy Scranton, Angela?” Fischer began, to which Kinsey replied, “I can’t wait to talk about it. This made me laugh so hard.”

For those who don’t know, Michael’s educational “Lazy Scranton” video (shown above) was inspired by “Lazy Sunday,” a truly genius SNL digital short from 2005 that stars Andy Samberg and Chris Parnell.

“So many of Michael’s bits are based on the bits of SNL and/or other comedians. He writes no new material,” Fischer said, comparing him to an eccentric cruise ship director.

“He thinks he’s a world class comedian,” Kinsey added. “He even called this meeting — which should be just like a new employee presentation meeting — he calls it his gigantic performance.”

In “Lazy Scranton,” Michael and Dwight rap about everything from Scranton’s nickname, “The Electric City,” to poison control, downtown dining, the Anthracite Heritage Museum, compact parking, and more. It’s one of director Ken Whittingham’s favorite scenes in the episode, and for good reason.

“We kind of went off script and created a bunch of extra scenes to make the video really hard to watch for the Dunder Mifflin employees,” Whittingham said. “Unfortunately we couldn’t use all of them.”

“What I remember about shooting that ‘Lazy Scranton’ video was just being in awe of Rainn Wilson and Steve Carell as performers,” Forrester said. “These guys are such serious actors, and between takes they would be talking about this performance like they were the Royal Shakespeare Company.”

“The director would yell ‘Action!’ and they would suddenly become these cartoon characters, bouncing off the walls like Bugs Bunny,” Forrester said. “And then ‘Cut!’ and suddenly they’re inside the actors studio for like two minutes, and then ‘Action!’ and it’s [comedian] Benny Hill. It was so wonderful to watch.”

While “Lazy Scranton” was definitely an episode highlight, Whittingham and Forrester recalled that there were so many good Michael Scott scenes that the episode ran too long and they had to make cuts.

“What I remember about filming this episode is that we ended up with too much comedy,” Forrester said. “The premise for Michael Scott was so perfect — that he would have these new employees and a new audience to perform for and impress — that we just ended up writing too many comedy bits for him.”

“It was so funny and we just had no room for it, because the episode was so packed with good stuff,” Forrester said.

Fortunately, Kinsey revealed that the deleted scene is included in the Season 2 DVDs, and you can also watch the scene below starting at 5:12.

Another SNL reference came later in the episode when Michael gave nod to “The Roxbury Guys.” The recurring sketch on SNL starred Will Ferrell and Chris Kattan (with occasional special guests,) and it inspired the 1998 comedy, A Night at the Roxbury.

In the scene on The Office, Michael attempts to reenact Kattan and Ferrell’s famous head bang to Haddaway’s “What Is Love,” except his boom box breaks and he’s unable to play the music. When former Stamford employee Andy Bernard (Ed Helms) stepped in to hum the tune for Michael, Kinsey said the cast broke.

“None of us knew what that was going to sound like, really,” Kinsey said. “I don’t think we were really prepared for Ed Helms as Andy to go full-out, and we lost it, and that’s when I did my snort laugh.”

“It was just in the script that he would provide the music,” Fischer said. “And remember, Ed was new to us!”

“We’re all in this little room and it’s totally quiet, and then with full commitment Ed is like [loud humming sounds,]” Kinsey laughed. “It was like so crazy.”

Be sure to listen to the full podcast episode to learn more behind-the-scenes stories from filming “The Merger,” and NBC, we’re going to need you to release the extended cut of “Lazy Scranton,” as ASAP as possible.