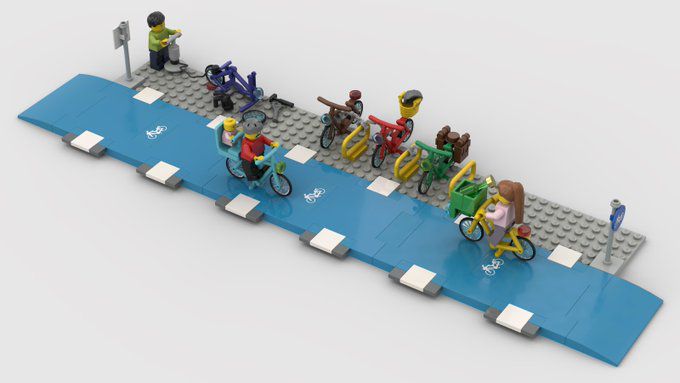 A thousand years ago, back in 2019, a regional councilor in the Netherlands named Marcel Steeman undertook a seemingly impossible challenge: convince the makers of one of the most popular toys in the world to do something a little different.

He wanted Lego, the toy production company based in Billund, Denmark, to add bike lanes to their tiny, brick-made cities.

For years, the streets in Lego’s city sets — once called base plates — had space for cars, people, even tiny storm drains, but no designated lanes for zero-emission, human-powered vehicles like bikes. Even worse, it appeared that Lego’s streets had become more hostile toward pedestrians and cyclists over time. As compared to Lego sets from years ago, the cars seem to have grown larger — evolving from four- to six-studs wide — and the roads appeared to be getting wider, while the sidewalks were getting more and more narrow.

The cars seem to have grown larger, and the roads appeared to be getting wider

“It really stood out that Lego City is such a car centered city,” Steeman told me in an email.

Steeman posted his bike lane proposal to Lego’s “Ideas” website, where enthusiasts can share and vote on each others’ ideas. Really popular ideas can get the chance to ascend up the ladder and become part of an official Lego set — though only 33 have actually been produced in the program’s 13-year history. The ideas range from the elegant, like this incredibly accurate looking violin, to the idiosyncratic, like this map of JRR Tolkien’s Middle Earth. Others have garnered enough support to graduate to full-fledged Lego sets, like this recreation of Sesame Street’s famous brownstones.

Steeman’s idea caught the attention of Marco te Brommelstroet, an associate professor in urban planning at the University of Amsterdam who tweets under the name Cycling Professor. And one of Brommelstroet’s tweets caught my attention, prompting me to write a story that asked the question, “Where are the bike lanes in Lego world?”

But as the idea gained more traction on social media, Lego stayed frustratingly silent. And Steeman’s posts to Lego’s Ideas site kept getting rejected. “I’ve tried several times,” he said. “Sometimes [they were rejected] without reason, one time with the reason it was just a political statement and not a set, and that really confused me.”

Several people who were supportive of Steeman’s idea of adding bike lanes to Lego’s streetscape tried contacting the company, but to no avail. (A spokesperson didn’t respond to a request for comment to my original story, nor to this most recent one.)

Meanwhile, Steeman and Brommelstroet continued to dig into Lego’s history and discovered that back in the 1980s and 90s, the company did produce street plates with small bike lanes painted green. But eventually the lanes vanished, and in the years to follow the roads got bigger, and the Lego cars grew from four-studs wide, to six studs, to eight studs.

Not only that, but they learned that the absence of bike lanes may have something to do with Lego’s supply chain. Thalia Verkade, a journalist who was collaborating on a book about mobility with Brommelstroet, discovered that Lego used a subcontractor for the road plates, which were among the last pieces that were made by a company other than Lego itself. According to Verkade, Lego was trying to buy out the contract to return production of the street plates to their own facilities, Steeman said.

Around the same time, Matthew Ashton, an official Lego Master, hinted in a tweet that some new form of roads would be coming to Lego’s city sets “in the not too distant future.” “A cliffhanger,” Steeman said.

All the while, Steeman was working at his job as a regional councilor for the province of Northern Holland, where he regularly tackles issues related to mobility. When the pandemic hit, Steeman shifted to working from home, sharing his home’s third floor with his 9-year-old son and all his Legos. “There’s Lego everywhere,” he said, “and I need to tilt my camera upwards to save face in the many digital meetings I have for my work.”

Right before the pandemic, Steeman caught wind of rumors of that Lego was going to revolutionize its road system by using adjustable sets and actual bricks, not just the big flat plates, as a way of playing with road designs. That would allow the inclusion of pedestrian crossings and speed bumps — and perhaps bike lanes?

Those redesigned street sets (#60304) were finally released last year, along with a small shopping district (#60306) that included a pretzel store, a sporting goods shop, a crosswalk, a couple streetlights, and — at long last — a thin blue bike lane.

Steeman was shocked, but rather than rest on his laurels, he immediately he took stock of all the ways this updated streetscape still fell short of what he really wanted. The bike lane was small, like really small, only two-studs wide, barely enough room for a cargo bike. Also, the box art depicted a bucket truck parked in the middle of the bike lane. Nonetheless, he chalked it up as a “small victory,” and got back to work promoting his idea for a wider, more accommodating bike lane.

He generated a new rendering of his idea using the new road plates as a foundation. He also added some bike racks, a bike with a child’s seat, and most importantly, big, wide, blue bike lanes. He chose blue as the color, knowing that’s the color used in Billund and around Denmark, where Lego is based. Bike lanes are painted red in his native Holland, so as to prevent people from mistaking them for the water in the canals.

Reluctantly, Steeman uploaded his new rendering to Lego’s Ideas website, anticipating another rejection. But instead, he got another major shock. “To my surprise the idea was accepted within a day,” he said. It was published on the Lego website and now Steeman can try to garner enough support to make it into a real set.

Lego gave him 60 days to get 100 supporters; he did it in 4 hours. Now he has a little more than a year to get 10,000 supporters. The odds are against him — remember, only 33 ideas have ever been accepted — but he’s confident it can be done. And if he doesn’t, he knows that the seed has already been planted with Lego’s designers. A thin blue bike lane can eventually grow into something much larger and safer from the smiling denizens of Legoland. Anything is possible.

“In the end, I just want a worldwide generation to grow up with a sustainable, healthy and above all safe alternative to the car-centered world we live in,” Steeman said. “And there is actually no bigger city on earth to start that revolution than Lego City.”

He added, “So Lego was probably a bit right when they said it was a political statement.”