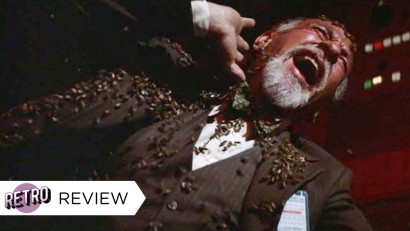 With all this talk of murder hornets, our thoughts turned to the disaster movies of the 1970s that blatantly exploited that era’s own insect eco-terror: killer bees! Though there were several movies that eagerly sought to cash in on killer bee paranoia, one stands out as the most deliciously terrible. Behold The Swarm!

Directed by disaster master Irwin Allen (he produced The Towering Inferno and The Poseidon Adventure), and written by the prolific Stirling Silliphant (in addition to scripting Inferno and Poseidon, he also won an Oscar for a very different sort of movie: 1967’s In the Heat of the Night), adapting Arthur Herzog III’s best-seller, The Swarm delivers exactly that: a massive swarm of killer bees armed with deadly venom and plenty of insectoid rage.

That right there would be enough to power a taut, terrifying tale. But The Swarm—specifically the home-viewing version, which is full of scenes excised from the box-office bomb theatrical cut and clocks in at over two and a half hours—is neither taut nor terrifying. However, there are so many other weird delights contained in all that padding, there’s no wonder this big-budget, star-studded extravaganza has ascended to the pantheon of movies that are just so memorably bad, they are very nearly masterpieces.

Michael Caine, in full “slumming for dollars” mode, stars as entomologist Brad Crane, whose sudden appearance after a mass casualty event at a Texas Air Force facility immediately puts him at odds with General Slater (Richard Widmark). That sets up a science-versus-military clash that stubbornly persists throughout the movie—Crane was merely tracking the bees that killed all the soldiers, he explains, but Slater remains skeptical of his motives—though both sides have a tough time coming up with a solution that won’t decimate the environment.

While the experts dither, the bees literally go to town, dive-bombing quaint nearby Marysville which is, unfortunately, gearing up for its annual flower festival. But this “mutant species of African killer bees”—as the movie progresses, characters start referring to them simply as “Africans,” which would be problematic even if The Swarm didn’t have an all-white main cast—doesn’t seem too interested in flowers. They prefer humans!

As Crane’s scientist buddy Dr. Walter Krim (Henry Fonda) discovers, these mutant bees can kill a human with just a couple of stings. If you don’t die instantly by being stung a zillion times at once, there’s a side effect that makes you hallucinate a giant bee while you’re trying to recover—demonstrated most unintentionally hilariously by Helena Anderson, an Air Force doctor played by Katharine Ross (a few years post-The Stepford Wives), who at one point literally opens a door and finds a buzzing menace on the other side, as if it’d just stopped by to say howdy.

Deadly venom would be bad enough, but these little buzzkills are also really into mass sabotage. In The Swarm, we see them cause two military helicopter crashes and multiple car accidents, and force a passenger train full of Marysville evacuees to derail and explode. They also pounce on a bunch of children who’re slow to put down their giant lollipops and take cover. We also know that as soon a nuclear power plant enters the picture, the bees are going to find some way to fuck shit up on a much grander scale, most definitely involving yet another explosion.

As is probably obvious, lot of people die in The Swarm. The movie’s generous run time allows us to get to know several of the doomed characters—most of whom expire in subplots that get tons of attention, then are never mentioned again once they abruptly end. Dr. Krim, the venom specialist who’s presented as the world’s best hope for developing an antidote, not to mention Crane’s BFF, decides to use himself as a guinea pig to test his serum without telling anybody. Naturally, he dies, coated in whatever glistening product The Swarm’s make-up team uses throughout the film to create sweat-soaked agony.

Then, one of the biggest arcs of the film’s first act—a sweet elderly love triangle involving Marysville’s school principal, its mayor, and a retiree (Olivia de Havilland, Fred MacMurray, and Ben Johnson)—ends soon after they board the train to escape the invasion. But we don’t just see them, like, scream and react, then cut away to a tasteful long shot of the train plunging down a mountain. Nooooo, we are subjected to a jaw-droppingly undignified death scene that sees multiple aging Oscar winners being flung around like rag dolls. And then…those characters are never mentioned again.

While most of The Swarm is ostensibly invested in Crane, Slater, and their various associates’ frantic efforts to stop the bees’ relentless march to the nearest big city, which is Houston, the movie still finds time to inject even more pointless subplots. Crane and Dr. Anderson somehow find time to develop a relationship, which sort of makes sense considering they’re trying to save the world together, but there’s also a very odd and shoehorned-in plot involving a pregnant woman (Patty Duke Astin) and her doctor (Alejandro Rey), who puts the moves on her even though her husband has just died in the Air Force base attack at the start of the film. That said, the timeline in The Swarm is just one of many elements that don’t make a lot of sense.

By the end of The Swarm, the creatures have proven smart enough to avoid pesticides, evolved enough to elude any anti-venom creation, and fearless enough to not let a bunch of Air Force dudes with flamethrowers cramp their style. They’ve also massacred thousands, though most of their body count comes courtesy of that nuclear power plant disaster we mentioned earlier.

At the last possible moment, Crane hits upon the exact strategy that, decades later, Jason Statham would use to stop a prehistoric shark from gobbling countless beachgoers in The Meg: luring the bees into a death trap using carefully calibrated sound waves. Whether or not that tactic would work on a mass of murder hornets remains to be seen, as if we don’t already have enough to worry about these days, but The Swarm does impart a couple of lasting lessons. Putting your trust in science is a big one, but so is the nagging idea that —as stupidly entertaining as The Swarm can be—maybe every disaster doesn’t need its own disaster movie.

Mini wind turbines. A2 aviator brown mens distressed leather jacket quantity. It makes sense to opt for a 16:9 ratio since the experience of watching a movie that fits the entire screen is unmatched.