The unforgettable gaming memes of the 2000s 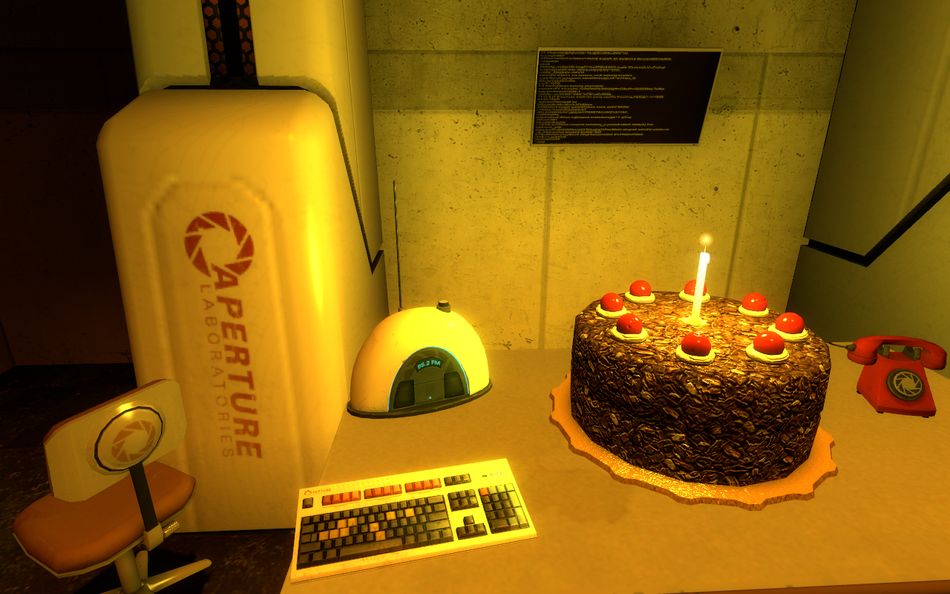 The 2000s were the most formative years for memes as internet accessibility and popularity surged, and gamers were one the main torchbearers.

Some of the biggest memes of all time came from video games and players in the 2000s, aided by highly trafficked forums and the introduction of YouTube to turn what would normally be small moments in pop culture into virtual wildfires.

In celebration of the aughts, we collected a handful of our favorite and most impactful gaming memes from that decade, taking a trip down memory to a time when the internet wasn’t quite so dominated by the social media empires we see today.

“The cake is a lie” takes us back to 2007 and the launch of Portal. Inside the game, the “cake” is a forever dangling carrot meant to motivate your forward progress – but it’s a fabrication. There’s no cake, just a disingenuously friendly AI named GlaDOS that wants to keep you jumping through hoops. The actual phrase pops up as a sort of Easter egg-y warning scrawled on a wall.

In broader culture, “The cake is a lie” wasn’t so much a visual meme as it was a concept. Cake jokes dominated the then-young social media space of Twitter in 2007 and 2008, at the height of Portal’s popularity. But the internet quickly wore the joke out, to the point that it all but disappeared by the time Portal 2 dropped in 2011. It had a brief chance for a comeback in mid-2020 when the internet suddenly started questioning our reality and cake’s presence within it, but it quickly became clear that the moment has passed for questioning the truthiness of a promised cake. – Adam Rosenberg, weekend editor, senior entertainment reporter

Valve had an incredible decade in the 2000s. With Half-Life 2, Portal, Team Fortress 2, Left 4 Dead, and official Counter-Strike releases, Valve cemented itself as one of the most prolific game developers of the aughts. Pair that with the company’s release of the game marketplace Steam in 2003 and Valve became a titanic entity. At that entity’s head is Gabe Newell, aka Gaben.

Newell was such a powerful figure in gaming and his large presence was impossible for gamers to ignore. Whether during a Steam sale, a conversation about the never-ever-coming-out-in-our-lifetime Half-Life 3, or honestly anything, Gabe’s face could pop up as an apt reaction, his expressions taking several forms that emanate raw power. – Kellen Beck, entertainment reporter

In a presentation of the upcoming PlayStation 3 game Genji: Days of the Blade at E3 2006, a Sony spokesperson said, “The stages of the game will also be based on famous battles which actually took place in ancient Japan.” That sounds interesting, and then all of a sudden during the gameplay demonstration, a giant enemy crab appears. “So here’s this giant enemy crab,” he says.

The juxtaposition of these sentiments along with a few other gaffes from Sony’s showing at E3 that year made the rounds with some hilarity-amplifying edits until “giant enemy crab” and the helpful tip of “attack its weak point for massive damage” became ubiquitous references across the internet. They’re reminders that video game hype and presentations can be facetious and that the idea of “realism” in games is largely laughable. – KB

As World of Warcraft player Ben Schulz bellowed out his own character’s name on a fateful day in 2005, charging solo into a room full of powerful enemies, he created a legendary moment in gaming. The “Leeroy Jenkins” battle cry exudes so much power. It’s a wanton disregard for any kind of planning or strategy. It throws caution to the wind. It shows a level of self-esteem and trust in one’s own skills and guild members that is rarely paralleled on Earth.

The infamous Leeroy Jenkins clip is fantastic. Almost a minute and a half of planning while the Leeroy character is sitting with the Away From Keyboard note above his head, and the strategizing being interrupted by an impatient “Time’s up, let’s do this!” It’s so easily translatable as a battle cry for any situation where someone is running into danger that it still stands today as a meme, a verb, and reference that pops up all over the place, even being immortalized in World of Warcraft as an achievement and a non-player character. – KB

Metal Gear Solid 3: Snake Eater caps off with a touching scene at Arlington National Cemetery in which Naked Snake pays tribute to his mentor, The Boss, who he himself killed at the game’s climax. The moment is capped off with a close-up of Snake delivering a sad, heartfelt salute (there was even a throwback moment in MGS4 that referenced it)..

The moment lives on even today as a handy GIF for those moments when a solemn, respectful response is required. Have a friend who took a stand against a toxic boss? Metal Gear salute. Or one who dropped their breakfast sandwich in the street before taking even one bite? Also Metal Gear salute. How about when someone you know loses all their save game data after their console dies unexpected? You guessed it, Metal Gear salute. – AR

When Nintendo executive Reggie Fils-Aimé stepped on stage at E3 2007 to help demonstrate the Wii Fit, exclaiming, “My body… My body is ready,” he left an indelible mark on history.

If you spent a lot of hours playing Call of Duty 4: Modern Warfare online then you remember the Noob Tube. It’s a derisive reference to the under-barrel grenade launcher you had access to immediately in one of the multiplayer mode’s starting classes. It was even more lethal in Modern Warfare 2, where a perk made it easy to recover spent ammo without having to respawn first.

This is another example of popular gaming vernacular where its origins have faded into the background over time. Plenty of games that feature online multiplayer serve up weapons that could accurately be described as a noob tube, but delivering it as some kind of put-down in 2020 means you’re just asking for people to fire back with – to cite another popular meme – a deluge of “how do you do, fellow kids” responses. – AR

Phoenix Wright: Ace Attorney takes us all the way back to 2001, a time when social media platforms on the internet were more underground and pop culture had no real awareness of what a meme was. But the Capcom-published series which casts you as an anime lawyer is perhaps best-known for its boisterous line delivery whenever Phoenix lodges an “Objection!” in the courtroom

Since then, the image of Phoenix shouting “Objection!” and pointing dramatically has become a go-to meme on the modern internet. Of course it has. There’s so much objectionable content out there in the world, it’s kind of a perfect image for many of the social media grievances that spring up day to day. Plenty of memes age poorly. This is not one of those memes. – AR

Remember the PlayStation Portable, Sony’s first attempt to turn the PlayStation experience into something you could take with you out of the house? It had a big moment at E3 2004 when Sony showed off the hardware and a bunch of launch titles – including the latest entry in the Ridge Racer series.

Maybe it was the chutzpah of suggesting that a semi-well-known racing game made for a hype-worthy PSP launch title. Maybe it was the lame line delivery of Ridge Racer’s trademark drawn-out introduction by former PlayStation boss Kaz Hirai. Possibly it was the predictably flat response from the crowd to the Ridge Racer news. In the end, it was probably a mix of them all that established this as an epic and oft-repeated moment in cringe-worthy game hype. (The video description says this happened at E3 2006, but that’s incorrect.) – AR

Wombo Combo may not be as well known as some of the memes on this list, but it stands out for its passion. In a Super Smash Bros. Melee doubles match featuring SilentSpectre as Captain Falcon and Tang as Fox against Lucky as Fox and Zhu as Fox, Lucky had just been eliminated leaving Zhu on his last stock against the Falcon/Fox duo. Zhu quickly found himself in a tough spot between the two characters after missing an attack, and that’s where the Wombo Combo begins.

Zhu was grabbed by Tang, his fate sealed. Tang and SilentSpectre tossed the Fox back and forth, dealing 77% damage in a series of grabs, throws, and hits ending with a Knee Smash from SilentSpectre to clean up the game in just a few seconds. The combo itself is impressive, but it’s amplified by the sheer disbelief and infectious hype coming from the commentators, Mango, HomeMadeWaffles, and Phil, cementing this Smash clip as one of the most memorable and impactful moments in the game’s history. Audio from the Wombo Combo pops up all over the internet and the infamous moment is referenced anytime an devastating moment in gaming (or anything, really) makes the rounds online. – KB