The Westworld Finale Whiffed It Hard 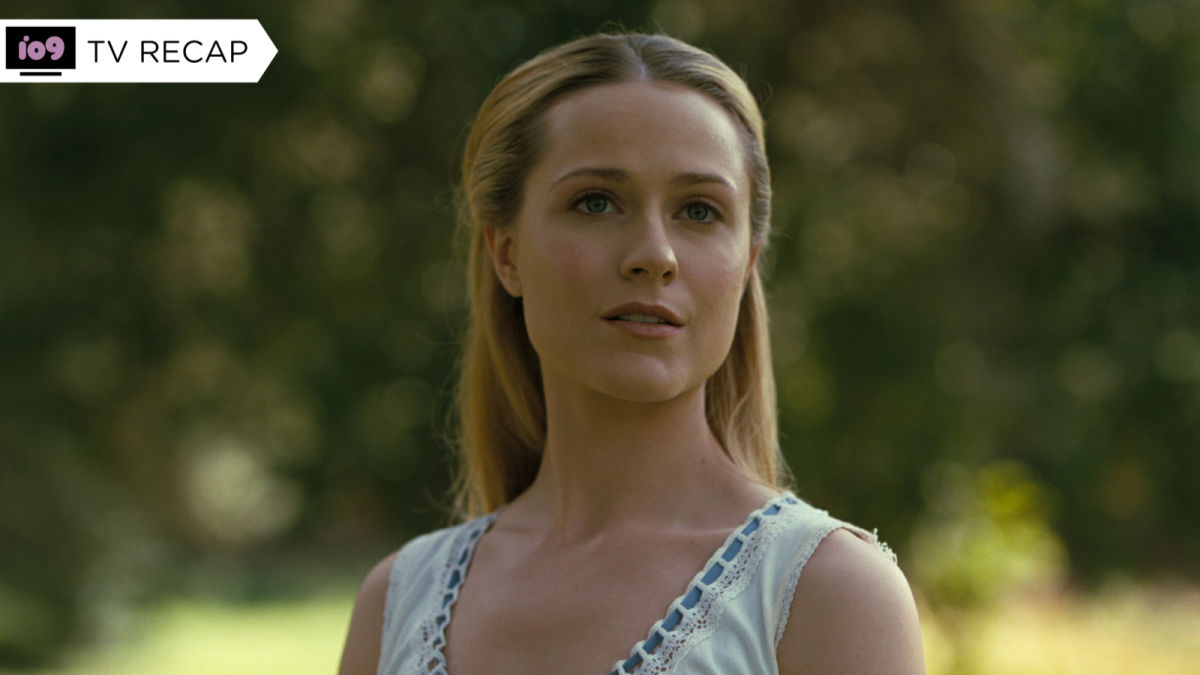 Turns out while violent pleasures have violent ends, Westworld’s season three finale was a violent end that had very little pleasure in it. That is, if you were hoping for something more than a basic sci-fi action flick. It turns out everything the show has been building up these past seven episodes is nothing much at all.

Actually, I take that back. While the many, many action scenes in “Crisis Theory” certainly felt Matrix-y (minus the very expensive “bullet cam” effect), the episode also managed to turn into a mediocre James Bond movie and then briefly metamorphize into a straight-up Fight Club rip-off at the end. But this would probably be okay if the season-long story came to a strong conclusion or at least gave us a satisfying twist that perhaps we’d been missing the clues for all along. Neither of these things happened. What’s worse, all those questions that season three has raised over the last eight weeks? The answers are either crappy or non-existent.

Up until the scene where Dolores (Evan Rachel Wood), Maeve (Thandie Newton), Caleb (Aaron Paul), and Serac (Vincent Cassel) all finally get in the same room together, there’s honestly not too much to say. After Dolores EMP-ed herself (and Maeve) last week, Caleb’s new A.I.-voice buddy told him to crack open Dolores’ skull to grab the Host core inside, then take it to a storage unit where she has another robot body frame stored in an official Delos-brand cooler.

As she’s putting on her skin, Dolores explains she chose Caleb specifically and reveals that she isn’t the first Host he’s met. There’s a flashback to more of Caleb’s early soldier days when it seems he and his platoon were sent to a Delos park so they’d have the most realistic training possible, i.e. shooting Hosts made up as terrorists who have taken Host hostages. One of Caleb’s squadmates suggests, since they’re in the park, they should live it up and sexually assault the female Hosts that have been inexplicably left to cower as hostages all night? But then Dolores reveals that Delos was keeping as close a track of the soldiers as any of its normal guests. Dolores chose Caleb for a reason—she knows him beyond his Rehoboam file, apparently.

Meanwhile, Serac goes into full James Bond supervillain mode, presumably because the world is rioting. He cartoonishly threatens Maeve yet again, overexplains that by getting Delos’ guest data it will somehow allow the nigh-omniscient Rehoboam to Destroy All Outliers, and twiddles his mustache. He needs the key to the data, which is also the key to the Sublime, which is in Dolores’ head, which must be connected to Rehoboam so the mega-computer can sift through her memory files to extract it. On the other side, Dolores wants Caleb to stick the hard drive with the secret Rehoboam-destroying strategy into Rehoboam, which we know—but Caleb doesn’t—for a fact will lead to humanity’s extinction.

So everybody wants either Dolores or Caleb to get to Rehoboam, and yet most of the episode is just them getting there. There are mass riots to get through, which means those security droids and lots of tear gas. Dolores hires goons to help get them to InCite; Hale sends her own goons to kill Dolores’ goons; Dolores hires one of Hale’s goons to kill the other goons. When Maeve pops by to have not one but two admittedly great fight scenes with Dolores, other goons help escort Caleb closer to InCite but disappear only for Ash (Lena Waithe) and Giggles (Marshawn Lynch), the goons we know and love, to arrive for what may be less than a minute of screen time before disappearing again. Eventually, Maeve defeats Dolores—with an assist from Hale (Tessa Thompson), who has enough Dolores programming in her to mess with Dolores Prime and paralyze her—and Caleb is caught, and they’re all put in the aforementioned room, where Rehoboam sits.

Here’s where things take a turn towards cartoonish super-villainy. Dolores is hooked up to Rehoboam, and Serac has his minions deleting her memory bit by bit until he finds that darned key. Serac mocks Caleb for being a murderer/idiot, and shows him that if Caleb had uploaded the Solomon strategy humanity would have gone extinct within 125 years max, which hurts Caleb’s feelings. The character of Serac has floated by basically on Vincent Cassel’s charm alone, but here he’s just being petty and shitty, and it weakens whatever gravitas this fateful, final encounter is trying to muster. If it’s not clear that the bad guy is winning and is about to take control of the world again, there’s a completely on-the-nose montage of riot control officers successfully taking control of riots to hammer the point home. And our heroes are helpless! Oh, if only there were another good guy who had been working for the bad guy to suddenly see the error of her ways and start fighting for the side of right once again!

Maeve starts hearing what Serac is going to say before he says it and realizes Rehoboam is feeding its creator lines—that it’s also been telling Serac exactly what to do, when to do it, even what to say, at all times. It’s the episode’s one good reveal, and I especially like that Serac has voluntarily and happily put himself under Rehoboam’s thumb; after seeing Paris get nuked, he is completely fine with letting the smarter entity take charge. As Maeve starts getting irritated, Rehoboam threatens to make Serac press the clicky button that would paralyze her as the first step toward her redemption. Here’s step two: By this point, there’s only one data pack left in Dolores’ head, and Serac’s minions can tell it’s not a key to anything. So Maeve uses her Host powers to commune with the last remnant of Dolores, which is a memory of her standing blissfully in a Westworld field. There, Dolores finally reveals her true plan…she didn’t want to Kill All Humans at all. She wanted to Free All Humans because it turns out she just loves the heck out of us.

It’s a twist so out of left field that it actually came from a ballpark 20 miles away, and so unsupported it has fallen into the molten core of the Earth. Forget about subtle hints that may have indicated Dolores’ complete 180; remember, even before she went on a bloody rampage for the entirety of season two, Dolores has been killing the shit out of plenty of humans in this season alone. In this episode alone! She sent Caleb to InCite with a device that would wipe out humanity entirely and the only reason he didn’t use it is that Maeve stopped him.

Dolores’ entire explanation for why she went from hating and murdering humans to loving and murdering humans is basically this: “Well, I was mad for season two, but then I remembered some humans could very occasionally be nice, so I thought I’d free them.” At least she has the decency to admit freeing humanity means wrecking the world first.

Maeve says Dolores’ plan was to “convince one man to fight,” which makes things so much worse. Okay, sure, Dolores sacrifices the last remnant of herself to take control of Rehoboam from Serac and give it to Caleb, who tells the computer to erase itself, thus freeing humanity from its control and maybe still dooming it to extinction? I dunno. It’s revealed the real reason Dolores picked Caleb as that one man is that in the flashback, he convinced his squadmates to not sexually assault the robots, of which Dolores was one. Caleb has the capacity to choose not be a complete shithead, which apparently earns him the right to lead the revolution, according to Dolores.

I have to assume that Dolores has spent all season grooming Caleb to lead said revolution in season four because if all she wanted him to do was choose to destroy the world-enslaving computer, I’m pretty sure Caleb was always going to be on Team Destroy World-Enslaving Computer. But if that’s true, that still means there was no real payoff for the main storyline in this season, which sucks. But there weren’t any payoffs for any of the other storylines, either.

Hale messes with Dolores some and disappears. Maeve’s big character development is that she finally decides to stop working with the villain. As for the barely used Bernard (Jeffrey Wright), William (Ed Harris), and Stubbs (Luke Hemsworth), the first two have been primarily hanging around all season so they can be in Westworld’s traditionally bonkers post-credits scenes, which means their stories will also be reserved for season four. (Stubbs, on the other hand, showed up because people love Stubbs, which is fine.)

Even the season’s biggest mystery—who was the final Dolores?—is a letdown. It’s Lawrence (Clifton Collins Jr.), which would be awesome except that he also shows up for about 30 seconds, only to hand Bernard a briefcase and an address, and then takes off. What’s he been doing? What is he doing? Because Lawrence-Dolores is in an SFPD outfit and car and has a bunch of explosives that are all somehow part of Dolores’ grand plan. At the end of the episode, after leaving Serac begging for the defunct Rehoboam to give him some orders, Maeve and Caleb watch a few explosions occur in the city skyline which Pink Floyd’s “Brain Damage” plays in a scene so cut and pasted from the end of Fight Club that it makes me embarrassed for the show.

I could have dealt with Dolores suddenly becoming Humanity’s Champion if her plan had made an iota of sense, but it didn’t. The key to the Sublime was never in Dolores, she hid it in Bernard’s code, and his role is to travel there to figure out how to deal with “what happens after the end of the world” which is information stored, uh, with all the ascended Hosts and park guest data? Dolores also had Bernard get William out of his mental health facility, a character who seems to have played absolutely no role in the plan whatsoever. And what the hell was Musashi-Dolores doing these last months? Argh.

It’s such a letdown, and it really robs the two post-credits scenes of their power, which is a shame. The first is William, who has decided to go to every Delos facility and Kill All Hosts personally. He comes across Hale a-scheming next to many, many Host-making machines. Unfortunately for William, Hale’s got her own William—dolled up in his full Man in Black attire—who slits the living William’s throat after a brief scuffle. The second scene is of Bernard waking up from his trip to the Sublime—covered in dust in his motel room, which has seemingly been abandoned for years. They’re still shocking, of course, but it’s really hard to get excited about them when there’s no proof that the show will do anything with them next season that’ll end up worth a damn.

I won’t go so far as to say Westworld needs to return to Westworld, but I will say the show, like Dolores, needs a much, much better plan in place if it wants to keep people watching. It’s not that the first two seasons of the show were meticulously schemed out—they had their fair share of hand-waving and shoving bits under rugs—but it was always clear they knew where they were going and how they were getting there. Season three knew where it wanted to end up, and just hoped for the best. Unfortunately, the best did not happen.