These Insects Are Not ‘Murder Hornets’ So Please Stop Killing Them 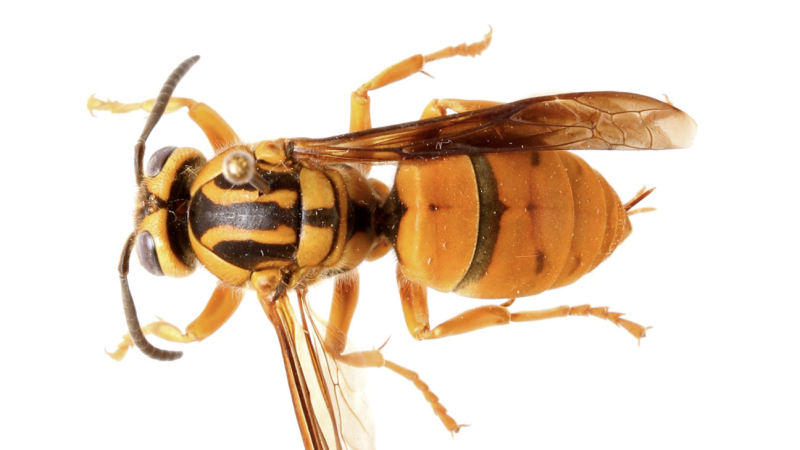 Asian giant hornets are large and stripey, yes. But so are several other insects. If you see something that looks a little like these “murder hornets” you’ve heard so much about, you may be tempted to kill it and/or convince yourself that the apocalypse has truly arrived. But please don’t. It’s almost certainly a case of mistaken identity.

Remember: the invasive hornets have only been reported in Washington state, and they’re extremely rare even there. (Also, please recall that they are not out to murder you.)

“[The vast majority] of Americans will never see an Asian giant hornet in their lifetime,” says entomologist Matt Bertone. He takes insect identification requests at North Carolina State University’s extension and recently tweeted that his inbox was full of suspected Asian giant hornet sightings. None of them were Asian giant hornets.

Now, it’s totally possible that one could show up in North Carolina, or another place where the hornets haven’t yet been sighted. If you think you’re seeing the first, sending a photo to your local extension office is the right thing to do.

But you can also save your local entomologist a bit of trouble by knowing your local large stripey bois. Even if the thing you see is huge and unlike any hornet you’ve seen before, that may be because you’re seeing something special: bee or wasp queens emerging from hibernation to start this year’s colony, as they do each spring. (Queens are larger than typical individuals of their species.)

The following are a few of the insects that entomologists say people have been mistaking for Asian giant hornets. And, just for a refresher: Asian giant hornets are not actually called “murder hornets,” and they have no particular interest in murdering you. So don’t panic either way.

Technically these hornets are invasive, but they’ve been in the US for over 100 years and they’re not going anywhere. Here’s a fact sheet on them from Penn State.

European hornets are typically 1 inch long, with queens measuring about 1.4 inches. They live in roughly the eastern half of the US.

European hornets build nests in hollow trees and occasionally the walls of houses, but they are also predators of other types of wasps, so that’s not necessarily a bad thing. Penn State entomologist Michael Skvarla says “when homeowners find a nest but it isn’t being too much of a nuisance (and no one in the immediate area is allergic to bee and wasp stings) I suggest they leave them be if at all possible.”

These are solitary wasps that emerge in the summer to feast on cicadas. The males can aggressively defend their territory, but they don’t have stingers. Females won’t usually bother you unless you’re a cicada. Here’s a fact sheet on them from the University of Kentucky.

Cicada killers can be up to 2 inches long, and there are multiple species that live in different parts of the U.S. (There’s a map here.) Eastern cicada killers’ abdomens are long, pointy and mostly black.

You’ve seen yellowjackets before, and they don’t look too much like Asian giant hornets. But both Bertone and Skvarla told me they’ve gotten the occasional southern yellowjacket queen among their murder hornet inquiries. The queens are larger than others of their species and can appear orange and black rather than yellow and black. They mainly live in the southeast.

Bumblebees are already large, and queens are larger still. There are many species of bumblebees, but they generally look fuzzy and, well, bee-ish. The Xerces society, a pollinator conservation group, noted that people are mistaking bumblebee queens for Asian giant hornets. Since a major concern with Asian hornets is that they may be a threat to bees, killing bee queens is not helping the cause.

These are some of the most common large, stripey insects in the US, but every area has its own array of lookalikes. The app iNaturalist can help identify species based on a photo if you’re not sure. If you live in or near Washington state, the state’s department of agriculture has put together this comparison chart of local insects you might mistake for Asian giant hornets.

Rachael Bonoan of the Tufts Pollinator Initiative adds that in addition to the above, German yellowjackets, paper wasps, and bald-faced hornets are all Pacific Northwest wasps that are on the large side, but none are as large as an Asian giant hornet.

If you do think you’ve seen an Asian giant hornet, report it to your local agricultural extension office. If you live in Washington, you can use this form to make a report.