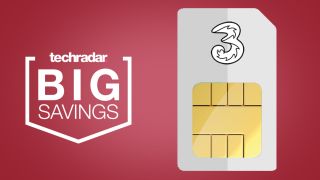 It’s not new for us to be bigging up Three’s SIM only deals. Over the last few years it has been the purveyor of some of our all-time favourite tariffs for people looking to save a bob or two on their phone bills.

But its brand new, limited-time only SIMO spectacular may be one of its finest yet. We’re told that it will only be available for a couple of weeks, and we expect it to be very popular indeed.

In short, this deal gets you 30GB of data for a mere £10 every month. Of course there are unlimited calls and texts, too. And the great thing about getting your cheap SIM through Three is that you’ll immediately be 5G-ready!

Quite frankly, there isn’t much more to say about this tip-top SIM only deal.

SIM only from Three | 12 month contract | 30GB data | Unlimited calls and texts | £10 a month
When it comes to big data plans at a small price, Three wins again and again with its SIM only deals. This time, it brings your bills down to a tenner and, in exchange, you get the benefit of a mega wedge of data and all the calls and texts you can handle.

You’ll also get the benefit of 5G mobile connectivity with a compatible handset, as well as hotspotting and roaming around the world at no extra cost. More details of the included perks can be found below…
View Deal

Three SIM only deals: what benefits are there?

Whether that’s more control over your plan, extra perks or increased roaming, you can see all of best parts of a Three SIM only deal or Three mobile deals down below.

– Personal Hotspot: Use your data to tether your laptop so you can use your phone like your own mobile broadband router.

– Control your spending: Features that allow you to block calls and texts to certain numbers that might otherwise run up extra costs on your bill.

– Data flexibility: Add extra data to your tariff at anytime, even halfway through a month.

– Travel Swagger: Get travel upgrades with EasyJet with bag drop and early boarding.