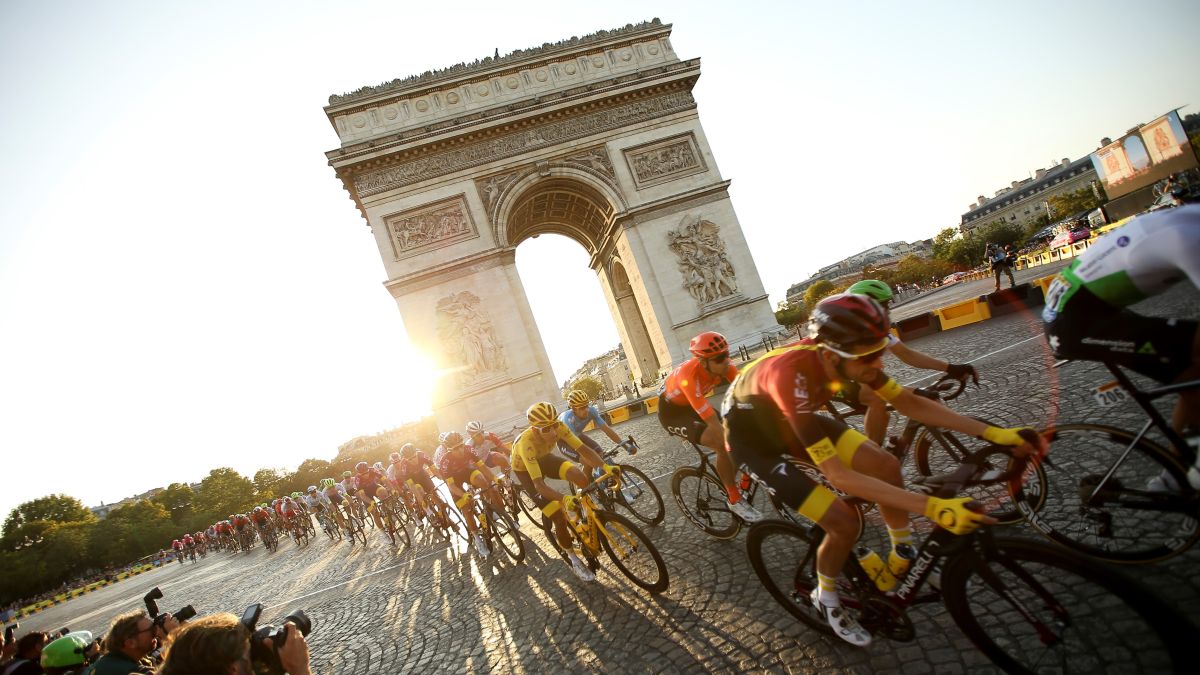 The Tour de France is set to get under way this weekend in what could be the most unpredictable French Grand Tour cycling race of all-time. Originally scheduled to start on 27 June, the race was pushed back due to Covid-19 and the action now starts in Nice on Saturday, August 29, and is scheduled to conclude in Paris on Sunday, September 20. Follow our guide to get a Tour de France live stream and watch the biggest UCI WorldTour cycling race of the year online wherever you are – including for free.

The 2020 Tour de France is a 21-stage event that takes place over 23 days, starting on Saturday, August 29 and finishing on Sunday, September 20. In the UK, TV coverage is available for every day of the event, courtesy of ITV4. This means it’s easy to watch a FREE Tour de France live stream online, thanks to ITV Hub. Brits abroad luck out, too, as you anyone can save up to 50% on ExpressVPN and tune in to the cycling just as they would at home.

On the organisational side, all riders and staff have to pass two coronavirus tests in order to enter the Tour de France bubble – and if two riders or staff from the same team show symptoms of the illness or test positive for it, the entire team will be expelled. For the cyclists themselves, the disruption to the season means the riders come into this Tour with only a few weeks of competition in their legs, which could really show as we progress towards the latter stages of the race.

For while there’s been very little competitive action ahead of the rescheduled Tour, but the Tour de France supremos are showing very little sympathy. This year’s TDF race takes in all five of France’s mountain ranges, includes 29 categorised climbs and five summit finishes, the first of which happens on just Stage 4. But the riders have to climb into the Alps well before that – on the second day of the race no less.

Will it be a repeat for Egan Bernal, a career-defining win for current World No. 1 Primož Roglič, or a historic one for homegrown favourite Thibaut Pinot? There’s only one way to know for sure. Read on for all the details of how to watch a Tour de France live stream and catch all the 2020 UCI World Tour cycling action online over the coming weeks as the biggest of the three Grand Tour races gets set to crown its latest winner.

The 2020 Tour de France is being shown live in the UK on free-to-air channel ITV – so anyone can stream it using the channel’s ITV Hub platform.

For added on-the-go viewing convenience, it has an excellent app that’s available on nearly anything that plugs in these days – just give it a search on your device of choice and you should be away.

ITV’s Tour de France TV coverage starts at 12.30pm BST on Saturday, August 29 (on ITV4), and the channel is promising to deliver more than 85 hours of live cycling over the 23-day event, which concludes on Sunday, September 20.

ITV4 will also be providing live coverage of La Course, the women’s race that precedes the Tour de France, from 9am on August 29.

If you’re from the UK but not at home right now, you can get your Tour de France fix by grabbing a VPN.

If you want to watch Tour de France 2020 but find yourself away from home when it airs, it will probably mean you’re unable to access your usual World Tour cycling live stream.

This is because of geo-blocking restrictions, but we’re pleased to say we can offer assistance in the form of a software recommendation – a VPN or Virtual Private Network being the only bit of kit you need to free yourself from such galling digital borders.

If you follow our expert advice – all of which is based on extensive, hands on testing – you’ll find they’re actually quite cheap, remarkably simple to use, and capable of way more than you thought they were. Here’s where to get started.

Try ExpressVPN and get 3-months FREE with this deal
We’ve taken the time to try out all of the biggest VPN providers and found ExpressVPN to be the best one around. It works across nearly all major platforms and offers super-fast connections to its many global servers – which are what you connect to when you want to quickly change your device’s IP address to a different part of the world.

Yep, ExpressVPN is the best all-round VPN for streaming at (appropriately) excellent speeds – and perhaps best of all, it has a 30-day money back guarantee ,plus 3-months FREE, when you subscribe for a year.

Good news! The 2020 Tour de France race is being shown absolutely FREE of charge on French national TV, where France 3 will be airing the race and live streaming the Tour de France every day of the race.

Yup, that means anyone located in France can stream all the wheel-spinning goodness, on whatever device they’re using, and watch it without paying a penny – all courtesy of France 3!

The catch? Well, all the commentary will be in French, so dust off that Lonely Planet phrase book and prepare to expand your foreign language skills beyond basic menu translations. Other European streaming options for the Tour de France race include RTBF in Belgium and Rai Sport in Italy.

Or, if that doesn’t sound like something you’d enjoy, there’s plenty of other coverage around the world, including in English. The choice is yours – just remember that by grabbing a 100% RISK-FREE ExpressVPN trial, you can significantly expand your live streaming options when you’re away from home.

The Tour de France 2020 is being aired by NBC Sports Gold in the US, with coverage of stage one starting at 6am ET/3am PT on Saturday, August 29.

For the most extensive coverage NBC has to offer, you can subscribe to NBC Sports Gold, which is offering a Cycling Pass for $54.99, delivering live, on-demand and commercial-free coverage of the Tour, plus loads more cycling action between now and May 31 2021.

If you’re a US resident out of the country that still wants to tune in via their usual service, then don’t forget to explore the VPN route set out above.

The great news for Aussie cycling fans is that all the action from the Tour de France 2020 is set to be broadcast on SBS Viceland, with coverage starting at 9pm AEST on Saturday, August 29.

Don’t worry if you’re out of the country and want to catch that SBS broadcast – using a VPN will let you watch as if you were back at home on your laptop, mobile or other TV streaming device.

Tour de France live stream 2020: how to watch the race online in Canada

Canadians will be able to get in on the Tour de France action via FloBikes, which streams online so you can watch from anywhere.

A monthly subscription will cost you $30, while a yearly account will set you back $150 ($12.50 per month), which will give you access to coverage of major cycling events throughout the year.

Not in Canada to catch that FloBikes stream? Well you know the answer by now… using a VPN is the way to make sure you don’t miss a moment.

The official broadcaster for the Tour de France in New Zealand is Sky Sport, which costs $31.99 per month and includes channels dedicated to football, rugby, cricket and golf.

For mobile streaming, users can tune in via the SKY Go app, and if you’re away from home right now you can use a VPN to catch your usual TV coverage.

Should you consider a GCN Race Pass?

You may have heard of something called the GCN Race Pass, which is available on a subscription basis in a range of territories including the UK, USA, Canada, Australia and New Zealand.

However, of the countries listed above only the UK version of the pass includes coverage of the 2020 Tour de France… and since the race is being shown for free on ITV4, it’s worth keeping your wallet in your pocket this time.

Whatever service you decide to turn to for your Tour de France coverage, don’t forget that grabbing a VPN will let you tune into it wherever you roam.

How does the Tour de France work?

The Tour de France is the oldest – and, depending on who you ask, the most difficult and prestigious – of cycling’s three Grand Tours, the other two being the Giro d’Italia and the Vuelta a España.

This year’s race is the 107th edition of the Tour, which is affectionately known as La Grande Boucle (the big loop), and unlike last year’s event, the 2020 Tour de France will not stray across any of the borders of La République.

The Tour de France line-up comprises 22 teams with eight members each, plus between two and four substitutes. It’s broken down into 21 stages, each of which is completed every day – and there are two days set aside for the riders to rest. Stage 1 takes place on August 29 and Stage 21 is scheduled for September 20, with the breaks in the action set for September 7 and September 14 (both Mondays).

At the end of each daily stage, the rider who crosses the finish line first is the ‘Stage Winner’, while the cyclist with the quickest overall time from the very start of the first day of the race gets to wear the prestigious Yellow Jersey.

However, one of the stages is an individual time trial, during which each of the riders will race to set the fastest time, without their teammates helping out by creating slipstreams. There’s only one time trial this year, and it’s scheduled for the penultimate day of the event.

The overall winner of the Tour de France is the rider with the quickest time for all the stages put together, and whoever’s in the lead at the end of each stage gets to wear the legendary yellow jersey the following day.

The opening stage, known as the ‘Grand Départ’, of the 2020 Tour de France will take place in Nice on August 29, while the the 21st and final stage sets off in Mantes-la-Jolie and finishes in traditional style with a sprint down the Champs-Élysées in Paris on September 20.

The 2020 Tour de France covers approximately 3,470 km (2,156 miles). There are nine flat stages, three hilly stages, eight mountain stages (all of which have summit finishes), one individual time trial, and two rest days. There will be no team time trial this year.

Who are the favourites for Tour de France 2020?

The Tour de France 2020 favourites… aren’t Chris Froome or Geraint Thomas, both of whom were abruptly dropped by Team Ineos just over a week before the start of the race, to the shock of pretty much everyone with any knowledge of cycling.

Incredibly, Team Ineos’ 23-year-old Egan Bernal will be the only previous Tour de France winner in this year’s peloton. His teammates Geraint Thomas (who finished second last year) and Chris Froome have won the general classification five times between them but were dropped from Ineos last week, and Team Jumbo–Visma’s Steven Kruijswijk, who finished third last year, is out of action with a fractured shoulder.

That means this years race is still expected to be a battle between Team Ineos and Team Jumbo–Visma, led by world number one road cyclist Primož Roglič and Tom Dumoulin. Groupama–FDJ’s Thibaut Pinot will be determined to have a say, though, and the Frenchman would be the first homegrown Tour de France winner since Bernard Hinault in 1985