UFC 249: all you need to know about Ferguson vs Gaethje and the rest of the card 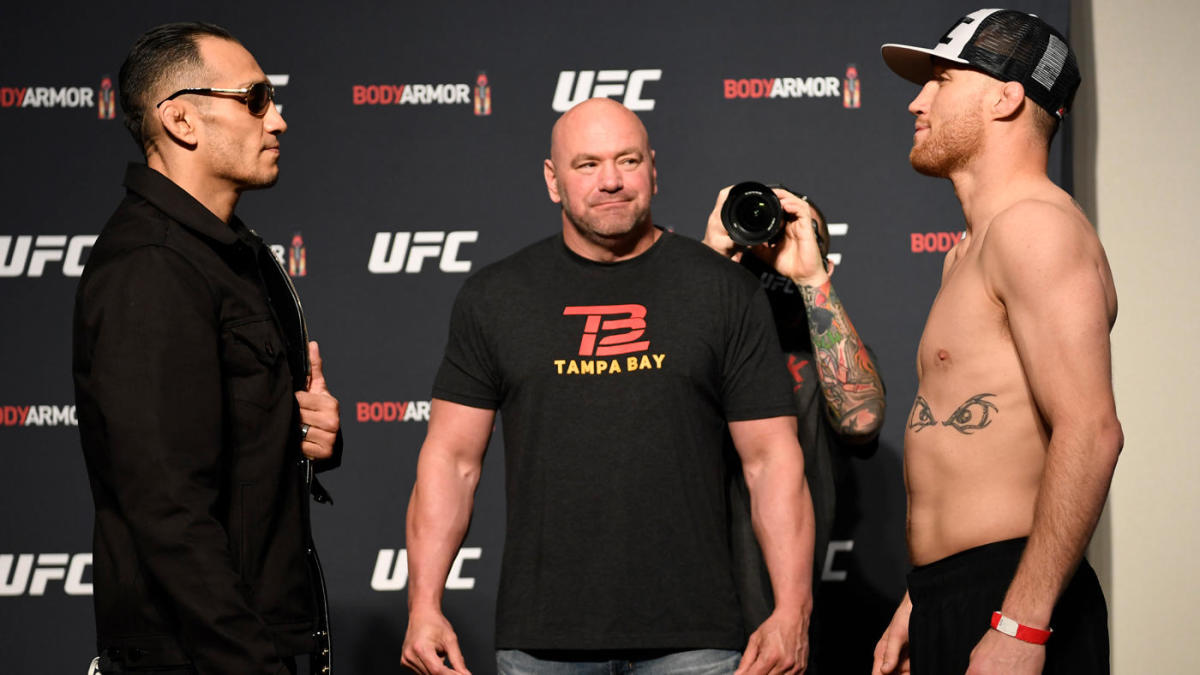 The talk of secret island locations is over and UFC 249 will finally take place this Saturday, with a long-awaited lightweight MMA clash between Tony Ferguson vs Justin Gaethje in Florida – read on to find out how to live stream UFC 249 no matter where in the world you are.

What’s so exciting about the return of UFC this weekend? Where do you start? As well as being the first international sporting event to take place following the outbreak of the Covid-19 pandemic, the stacked bill boasts a crucial lightweight interim title fight as its main event – a division that features some of the sport’s biggest draws.

UFC 249 will take place behind closed doors on Saturday, May 9 at the VyStar Veterans Memorial Arena in Jacksonville Florida.

Early prelim coverage will start at around 6pm ET / 3pm PT and for those in the UK 11pm BST. For the main card, the time to tune in will be 10pm ET, 7pm PT and 3am BST.

ESPN+ is your place to watch in the US and we have further details below.

That headline act sees Tony Ferguson finally take on Justin Gaethje, just weeks after after the pair were left disappointed after the plug was pulled on UFC head honcho Dana White’s first attempt at staging the fight by ESPN bosses.

But there’s plenty more to enjoy besides. Read on to discover all you need to know about UFC 249 or, if you just want to know where to watch the event from your corner of the globe, head straight on over to our UFC 249 live stream info page.

Who are Tony Ferguson vs Justin Gaethje?

In a sport of big characters, Mexican-American fighter Tony Ferguson is one of UFC’s most eccentric. A noted fan of magic and breakdancing, the number 1 ranked lightweight contender first made his name on UFC reality show The Contender, winning every fight via KO or TKO during his appearance on season 13 of the show. He has since gone on to chalk up one of the best records across all divisions and is unbeaten in seven years.

Known for possessing a hugely effective brawler-style approach on his feet, Justin Gaethje comes into the bout off the back of a formidable wining streak of his own, with three consecutive 1st round KO/TKOs to his name.

Who is the favorite to win the Ferguson vs Gaethje fight?

Bookies currently mark out Tony “El Cucuy” Ferguson as the 4/7 favorite to win the fight outright with Betfair in the UK (correct at the time of writing). Ferguson will enter the Octagon riding a 12-fight winning streak, and has not experienced defeat since 2012, with oddsmakers favoring his unpredictable approach over the more orthodox stand up style of his opponent.

When did Ferguson and Gaethje last step into the ring?

Ferguson last entered the Octagon almost a year ago with a one-sided victory via a doctor’s stoppage against Donald Ceronne at UFC 238.

Gaethje has been the far more active fighter of the two over the past few years with his last fight also against Cerrone at Fight Night 158 in Vancouver back in September the third successive fight that the American fighter has notched up a first round stoppage.

What are the other highlights from UFC 249?

The bumper card has two prelim fights that would in normal circumstance grace the main card.

While there won’t be any audience in attendance to create a regular electric UFC atmosphere, a tasty looking welterweight clash between former lightweight champion Anthony Pettis (22-10) and Donald Cerrone (36-14) should get pulses racing early doors for those viewing at home, while a heavyweight bout between “Boa Constrictor” submission king Aleksei Oleinik (58-13-1) and Brazilian former champ Fabricio Werdum (23-8-1) who will be making his return after two years out is also highly anticipated.

Over in the US trying to track down the perfect UFC 249 stream? ESPN+ has had the exclusive rights for the past year meaning it is the one place to watch it.

There are two options on cost, completely depending on whether or not you already subscribe to the service. If you don’t, then the best way to go is with a UFC Bundle, costing you $84.98. That gets you both the UFC 247 PPV and a year-long subscription to ESPN+ (that would normally cost $50 alone).

Your other option is to just simply buy access to UFC 249 for $64.99. You can tune in to watch all of the action including preliminary fights on Saturday, May 9 at 6pm ET / 3pm PT.

What does a UFC fan receive with their ESPN+ subscription?

Much like the rest of the sporting world, the UFC has been quiet in recent weeks – but with the show now back on the road a subscription to ESPN+ opens up access to exclusive live UFC Fight Nights, alongside original content including Dana White’s Contender Series, UFC Destined, and Ariel & The Bad Guy, plus classic fights, replays, and there’s also the perk of fewer adverts.

As a business owner, you understand the importance of having a strong online presence. Teppiche. Major un climate pact is reached, but deal does not put world on target.