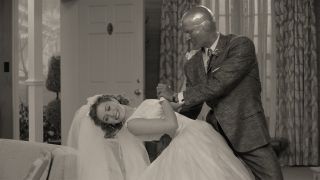 WandaVision takes the Marvel Cinematic Universe to places it’s never been before. Instead of focusing on epic superheroics, the new Disney Plus TV show turns Avengers Wanda Maximoff (Scarlet Witch) and Vision into a married couple at the center of their very own sitcom.

While the first two episodes are set in the 1950s and 1960s, however – and feature many of the sitcom tropes of their respective eras – that doesn’t mean WandaVision sits between the 1940s-set Agent Carter and the 1970-set sequence in Avengers: Endgame in the MCU timeline.

Wanda and Vision’s turbo-charged journey through sitcom history is clearly part of some wider narrative, with the presence of external observers – and mysterious intelligence agency SWORD – suggesting that time isn’t quite what it seems. There’s also the big mystery of how Vision, who was killed in the Avengers: Infinity War/Endgame arc, is apparently alive and well.

“[WandaVision]’s a beautiful little puzzle box that you begin to open,” says Vision actor Paul Bettany. “Everything has a reason. There are layers upon layers.”

WandaVision is already a TV show that embraces its mysteries. Here’s how it fits into the labyrinthine timeline of the Marvel Cinematic Universe…

What happened to Wanda and Vision in the Marvel Cinematic Universe movies?

Wanda Maximoff made her first appearance in the end credits of Captain America: The Winter Soldier. Along with her twin brother, Pietro, she’d volunteered to take part in HYDRA agent Baron von Strucker’s experiments to create superhumans. She became telekinetic, while her brother, known as Quicksilver, gained super speed.

When the Avengers brought down von Strucker and his HYDRA operations in the opening act of Avengers: Age of Ultron, the twins joined forces with malevolent AI Ultron, motivated by their desire to take revenge on Tony Stark for building the weapons that killed their family in Sokovia. They ultimately turned on Ultron when they realized he was planning to wipe out the entire human race. After Pietro died in the Battle of Sokovia, Wanda joined the Avengers.

Vision entered the MCU in Age of Ultron. Ultron originally built Vision’s body as a vessel for himself, incorporating one of the Infinity Stones (the Mind Stone) and vibranium (the almost-indestructible metal Captain America’s shield is made of) into the design. The Avengers intercepted the body before Ultron could upload his consciousness, however, and instead used what remained of Stark’s AI JARVIS. The resulting android became Vision – and had an impressive skill set including flight and the ability to walk through walls.

By the time of Captain America: Civil War, Wanda and Vision have become close during the time they’ve spent together in the Avengers compound. Their relationship is put under massive strain, however, when they end up on opposite sides of a disagreement that threatens to tear the Avengers apart. Wanda sides with Captain America in opposing the Sokovia Accords that will control superhero activity; Vision sides with Iron Man in supporting them.

By the time of Avengers: Age of Ultron, most of the Avengers have gone their separate ways. Despite Wanda being on the run, she regularly catches up with Vision to continue their relationship. On one such meeting in Edinburgh, they’re attacked by a group of Thanos’s goons from the Black Order, who want to recover the Mind Stone in Vision’s head as part of their boss’s Infinity Stone quest. Captain America, Black Widow and Falcon show up to save them, and they travel to Wakanda to find out if there’s any way of safely removing the Stone.

There’s no time to do that before Thanos turns up, however, so Vision asks Wanda to destroy the Mind Stone – even though it will kill him. Wanda reluctantly agrees and succeeds – but Thanos uses the Time Stone to travel back a few seconds and remove the Stone himself.

Vision is dead and Thanos uses his fully powered Infinity Gauntlet to finger snap half the life in the universe out of existence. Wanda is one of the many who disappear.
Five years later she reappears after Hulk successfully reverses the finger snap, and she helps take down Thanos for a final time. She returns to the Avengers but Vision, having been killed before Thanos disappeared half the universe, is still dead…

As the first release of the MCU’s hotly anticipated Phase 4, it’s natural to assume that WandaVision is set after the events of Avengers: Endgame. And that’s seemingly confirmed by WandaVision director Matt Shakman, who believes that in terms of the MCU timeline, Wanda has just helped to defeat Thanos.

“The world just keeps putting up obstacles for her, and she has all of this untapped power that she doesn’t fully understand,” he explains in production notes for the show. “Her journey for this show is to come into her own. She’s an incredibly powerful figure who’s been manipulated and used over the years. This is her opportunity to rediscover herself, and at the same time, it’s a brilliant love story.”

We’ve been watching the Marvel Cinematic Universe long enough to know we shouldn’t take anything on face value – Marvel Studios boss Kevin Feige and his team are masters of secrecy and deception – but there are other factors that make us believe WandaVision really is set after Endgame.

For starters, there’s the modern tech visible at the end of episode one, when it’s revealed that the sitcom is being watched by a mysterious observer – seemingly working for intelligence organization SWORD (Sentient Weapon Observation and Response Division). The helicopter toy that Wanda finds in her garden is also of a modern design.

And while Teyonah Parris’s first appearance in WandaVision was as a character named Geraldine in the ’60s-set episode 2, we know she’s actually playing Monica Rambeau.

This is particularly relevant to the MCU timeline. Monica is the daughter of Carol Danvers’ best friend Maria Rambeau, and previously appeared as an 11-year-old in Captain Marvel. With Captain Marvel set in 1995, Monica would be 39 by the time the events of Avengers: Endgame take place in 2023. While Teyonah Parris is only 33 in real life, she’s at least in the right age range for the timeline to fit.

How is Vision back in WandaVision?

That’s arguably the biggest mystery in WandaVision – though there’s a strong possibility he’s not really back at all.

There’s already strong hints that much of the show is taking place in Wanda’s mind – the voice on the radio in episode 2 is specifically trying to contact her, while the fact she’s able to rewind time after the ominous appearance of the Beekeeper suggests she has a degree of control over this sitcom world. It’s therefore entirely conceivable that she’s conjured up an idealized version of Vision in her mind – that WandaVision’s Vision still has the Mind Stone in his head suggests this is the man (well, android) she remembers from before his encounter with Thanos.

Maybe she’s hiding her consciousness somewhere to protect something or something, with external forces trying to get hold of some essential information – that could explain why the other characters ask so many questions, and why Monica Rambeau is inside Wanda’s head.

Could WandaVision be set at any other time in the MCU timeline?

Marvel has a long history of spectacular rug-pulls, so there’s a good chance WandaVision will go in a direction nobody saw coming.

The fact that Vision’s forehead was home to the Mind Stone for years may hold some answers. Could the powerful Infinity Stone have created an imaginary paradise for Wanda before she had to kill Vision? Or has someone somehow retrieved the Mind Stone after the events of Endgame? Seeing as time travel is possible in the MCU it’s plausible, though we think it’s unlikely – Captain America returned the stone to 2012 at the end of Endgame, and surely none of the Avengers would mess with the Infinity Stones after what happened with Thanos.

Another alternative is that WandaVision is set in an alternative dimension, outside the usual Marvel timeline – this would certainly be consistent with Feige’s comments in Entertainment Weekly that WandaVision will directly set up upcoming movie Doctor Strange in the Multiverse of Madness.

And seeing as SWORD tend to investigate extraterrestrial activities in Marvel Comics, we wouldn’t rule out alien activity either. Pretty much anything is possible at this stage.

New episodes of WandaVision are available every Friday on Disney Plus.