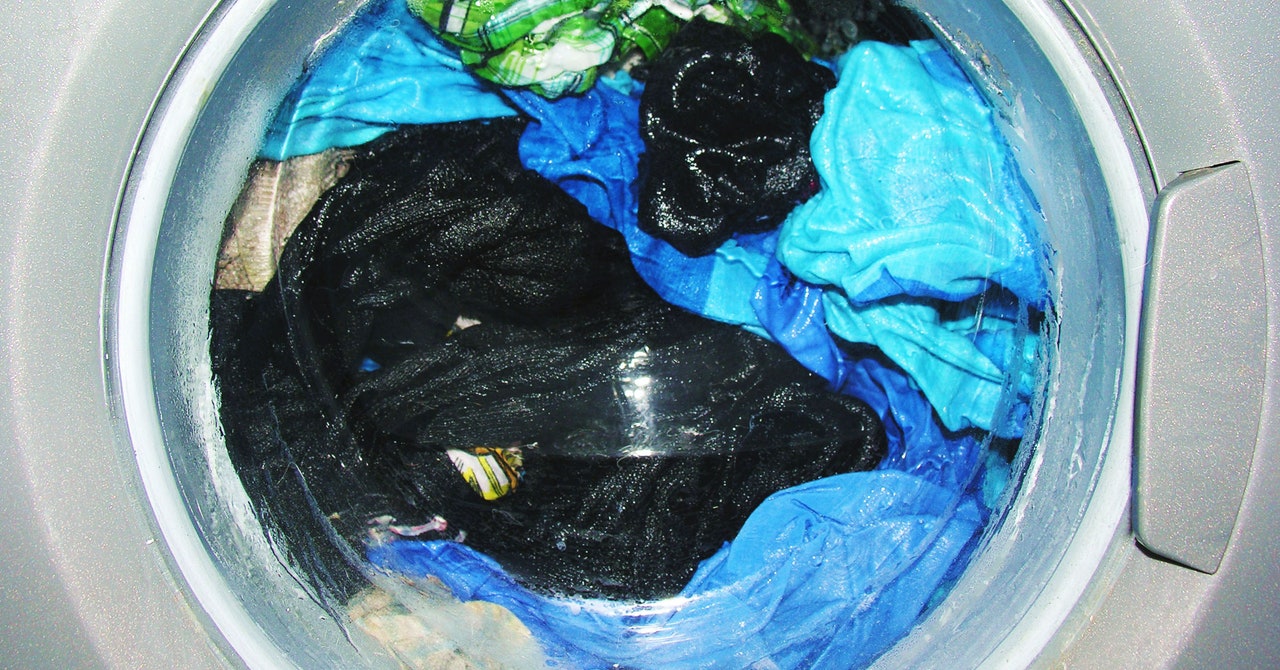 Instead, they pointed the finger of blame at the washing machines themselves, specifically how water moves through clothes. You might assume that synthetic clothes will shed more microfibers if they’re packed tightly in a big wash, rubbing against one another. But these researchers found that high-efficiency machines, which use less water, also created less fiber loss. “The big surprise is really that it’s not all about agitation,” says Procter & Gamble researcher Neil Lant, lead author on the paper. “The big reason for fibers being lost in washing is actually the force of water flowing through the textiles and the yarns. And that’s what actually causes unplucking of fibers.”

The age of the clothes matters, as well. Lant and his colleagues found that new garments are the highest shedders—maybe thanks to loose fibers left after the manufacturing process. “When you get to about washing them six to eight times, you then get to a minimum level of release, and it stays at that minimum level, pretty much forever,” says Lant. “And we did testing up to 64 cycles.”

When asked if some people might be critical of a study funded by a detergent company that concludes that its products aren’t exacerbating microfiber shedding, Lant notes that the research was peer-reviewed before being published in PLOS One. “That data goes through a very, very large amount of scrutiny before it finds its way to publication,” he says. In the paper’s funding disclosure, the authors note that Procter & Gamble provided funding, but did not have any say in the study’s design, data collection and analysis, or preparation of the manuscript.

“They might think that we’re just here to sell more detergent and fabric softener,” Lant says. But, he continues, “this has been done with a lot of academic research, professors with many years of expertise, and the work has gone under an enormous amount of scrutiny.”

But University of Strathclyde microplastic researcher Steve Allen takes issue with the study. “It’s not repeatable,” he says. “They’ve got laundry loads from citizens, which is great, but we don’t know what was in those loads. They didn’t tell us any of the demographics of who was supplying clothing. We’ve got some photos of loads of washing, but we don’t know what was in it.”

“I’m not saying that their science is particularly wrong,” Allen continues. “I don’t like how they did it, and I certainly wouldn’t cite it.”

Whether or not detergents affect microfiber release, we can’t lose sight of holding the polluters to account. Consider what the producers of single-use plastics did over the past few decades: They harped on the importance of recycling, arguing that we as consumers aren’t careful enough about properly disposing of the stuff. But a more effective solution would be cutting demand and production of single-use plastics. Same for fast fashion.

“It’s got to be a prevention strategy—fast fashion just has to go,” says Marcus Eriksen, chief science officer and cofounder of the 5 Gyres Institute, a nonprofit that fights plastic pollution. “The idea of when Pharrell wears one piece of clothing or a fancy hat, there’s suddenly thousands of hats in the market—and then in a few months they’re all in landfills.”

The challenge of convincing people that they should stop making and buying fast fashion is that there isn’t much data yet on how microplastics and microfibers might adversely affect human health. That may give polluters wiggle room to put off mitigation, and make the public less likely to demand action. Scientists know we’re eating and drinking heaps of the stuff, and breathing it deep in our lungs. “Is there harm?” asks Eriksen. “We’re still trying to figure that out. But I think if you use the precautionary principle, we can stop that flood of microfiber into the world because it’s now global. Why wait until there’s harm, at that point?”