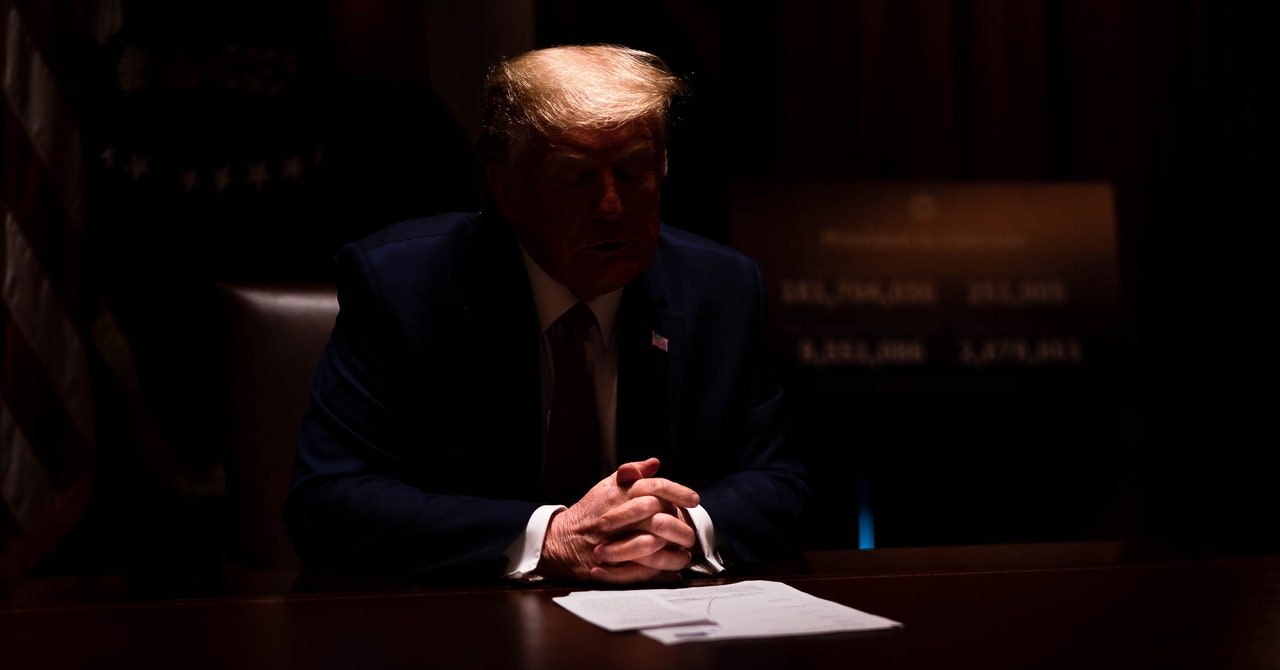 The reason, explains Facebook spokesperson Andrew Stone, is that the Lincoln Project is not an ad from a campaigning politician, but an outside organization. If candidates for public office pay Facebook to circulate even demonstrably false claims, Facebook will happily place it in the News Feeds of a targeted audience. But if the advertiser is not running for office, Facebook will append a scarlet letter to ads identified as making exaggerated claims and misstatements.

But wait: The “Mourning” ad seems accurate. Online critics wondered whether Facebook—whose handling of misinformation in the 2016 election seemed to benefit the Trump campaign—was doing the White House a favor in censoring the Lincoln ad.

The truth is not so nefarious but not terribly comforting, either.

Facebook relies on outside fact-checking organizations to determine the truthfulness of controversial content. These operations choose what stories to vet, either by identifying controversial content or by selecting from a dashboard of popular content provided by Facebook. In this case, Politifact, the fact-checking branch of the nonprofit Poynter Institute, decided to look at the ad, which had instantly garnered a lot of attention.

According to Aaron Sharockman, Politifact’s executive director, his fact-checker didn’t have a problem with any of the many statistics in the ad about the coronavirus death toll or unemployment numbers. Instead, Politifact zeroed in on one sentence: “Donald Trump bailed out Wall Street but not Main Street.” To many (like me) this may seem like an opinion, whose worth depends on data. The Lincoln Project provided a number of sources, including Bloomberg, NBC, Vanity Fair, and even the New York Post, where a Fox Business News reporter wrote in an op-ed, “Wall Street traders will make money, while Main Street businesses face economic conditions not seen since the Great Depression.” But Politifact chose an absolutist interpretation. Because the Cares Act passed by Congress and signed by Trump did some things for Main Street, it reasoned, in effect Trump had indeed bailed out mainstream America. “Most people who argue seem to suggest that maybe Trump has bailed out Wall Street more than Main Street,” says Sharockman. “But that’s not what the ad said. So I feel real good about the rating as calling it false.”

On Facebook the warning label read “Partly False.” I asked Sharockman, since every other sentence was indisputably factual, why the ad wasn’t labeled “Mostly True.” He told me that the only alternatives were “True, Partly False, and False.” (Later I did my own fact-check: Politifact’s website describes a “Truth-o-Meter” that includes categories like “Mostly True” or “Half True.” Apparently, Facebook accepts only the three that Sharockman mentions.)

Fact-checking of political ads can be more art than science; it often rests on slender distinctions. But as Politifact knows, the power of those distinctions can become grotesquely distorted when they are translated to labels that Facebook blindly applies. The penalties are severe. When an ad is deemed False or Partly False by a fact-checking organization, Facebook will pull the advertisement. Even worse, when people share the ad with friends, it is treated as toxic content and buried in the News Feed. When people do see the post, they must click through the warning label to view the actual ad, as if it contained gory medical scenes or other disturbing content.

The Lincoln Project complained to Facebook and got no formal response beyond a referral to the fact-checkers. Politifact’s stance is that the organization should have changed the ad to say that Trump helped Wall Street more than Main Street. Sharockman says the fix would take only six seconds. Jennifer Horn, a cofounder of the Lincoln Project, says that her organization will not bow to censorship. (There is also the fact that this controversy has made the ad even more effective—the Lincoln Project says that it has been a champion in eliciting donations.) She notes that YouTube and Twitter have not objected to the content of the ad, and several television markets have run it without asking for changes.