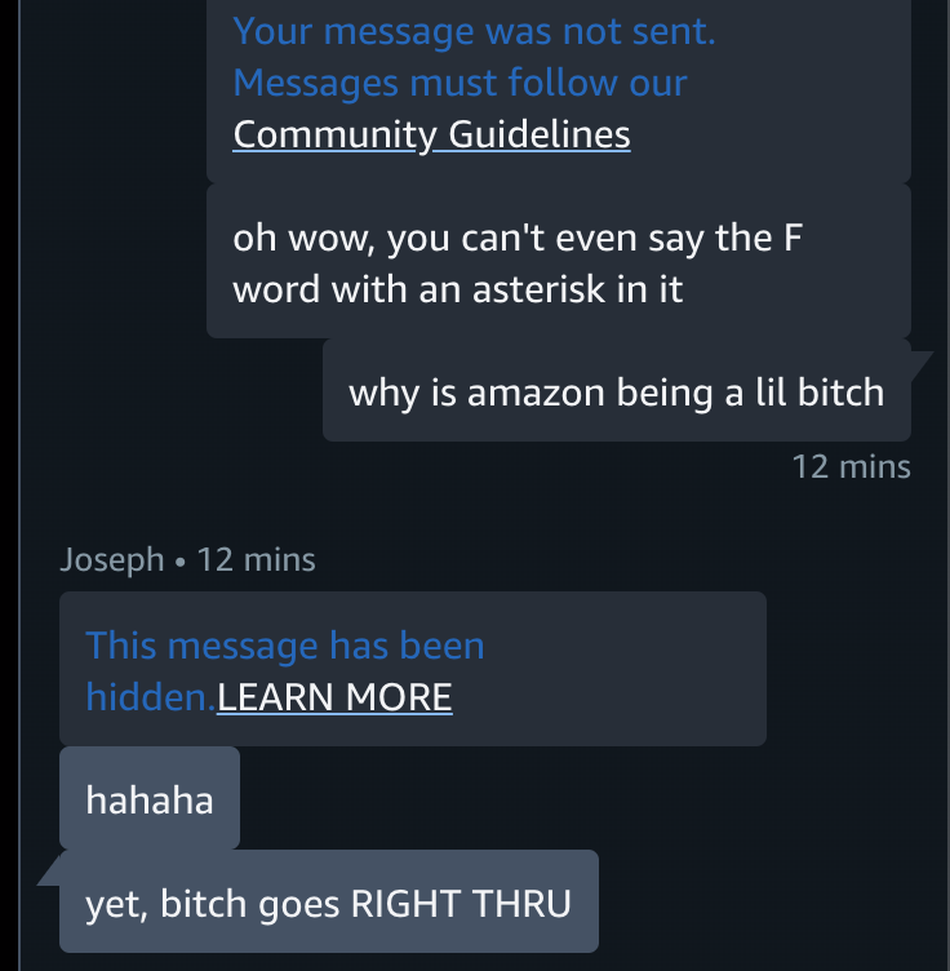 Fans of Mrs. Miriam Maisel know her as the most foul-mouthed fictional female comedian on the Eastern Seaboard. Unfortunately, for people who watch her show with friends using Watch Party, they won’t be able to fucking swear along.

Amazon Prime launched Watch Party, its answer to the popular service Netflix Party, at the end of June. Watch Party lets up to 100 Prime users all watch the same movie or TV show at once, with a live chat window on the right-hand side of the screen so viewers can talk to each other at the same time. Netflix Party and its clones have become popular and necessary as people have gathered online for virtual watch parties during the pandemic.

However, Amazon’s new product has a curious feature: you can’t use certain curse words in it. If you attempt to use words like “fuck” or “asshole,” Amazon instead gives you a message that reads “Your Message Was Not Sent. Messages Must Follow Community Guidelines,” linking to Amazon’s Community Guidelines. In place of your sweary communique, people you are chatting with will see this message in a grayed-out box: “This message has been hidden. LEARN MORE,” with “learn more” linking to the guidelines.

Mashable reached out to Amazon to ask why, pray tell, it’s preventing its users from making full use of the dirtiest corners of the English language. Amazon did not respond, and we will update this article when they do. But in the meantime, we have a few guesses why.

The Community Guidelines the error messages reference are the same guidelines that govern comments and reviews on Amazon. In fact, the guidelines don’t even mention Watch Party in the products it ostensibly governs. But it appears Amazon has taken a conservative approach to language, presumably to prevent angry customers from getting too foul-mouthed in the reviews. The most relevant portion, “Respect Others,” reads: “Don’t post content that is libelous, defamatory, harassing, threatening, or inflammatory. For example, don’t use obscenities or profanity…Don’t post content that is obscene, pornographic, or lewd.”

It seems as if Amazon’s no swearing policy has, by default, carried over to Watch Party chat. It makes sense that Amazon would lean on existing (if crude and restrictive) content moderation technology, because moderating dynamic conversational content is extremely hard to do — it’s something all of the major social networks grapple with to this day. The “free the nipple” movement and social media’s inability to moderate hate speech have shown that computers just aren’t very good at understanding context. That means that Amazon most likely has a list of phrases and words that aren’t OK, whether they’re published in a public product review, or in a casual Watch Party chat with friends.

That blanket use of its community guidelines could also provide an explanation for another weird feature of the no-swearing policy: the words and phrases that Watch Party allows and doesn’t allow seem extremely arbitrary at best.

For example, all variations of the word “fuck,” including the asterisk-including “f*ck,” are not allowed. However, “bitch,” even when wielded in a phrase like “you bitch,” sails right through. Pardon our French for the next section, but this is for science: “cunts” and “twats” plural are OK, but the singular “cunt” and “twat” are not. What gives?!

Mashable has conducted an extremely scientific analysis of the language Amazon Prime Watch Party allows and prohibits. Here is what we found.

Luckily, Amazon is only policing our words, not our thoughts. It did not censor our personal objections to the way Amazon conducts its business or Bezos’ massive accumulation of wealth. Phew!

Aside from public comments, Amazon is just getting into the social content game. We don’t expect this policy to stick around for long — Jeff Bezos is no prude. But until then, you can test out your dirtiest combinations of swear words in Watch Party, and see what skates by the robot morality police. Have fun, kiddos.