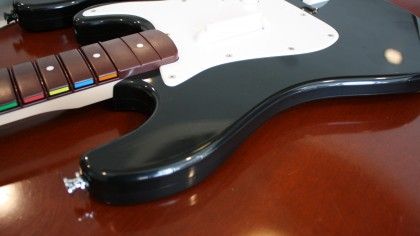 Android 11 is the upcoming Android operating system update which is set to being rolling out to phones in late 2020 – however, a public beta is now available to download, giving users a first look at the future of Android phones.

As well as all the new Android 11 features that we knew about, a surprise extra one was discovered by XDA Developers hidden in code – a collection of 84 games controllers are now compatible with the operating system. This means if you connect them via Bluetooth or cables you can use them to control your phone without touching the screen at all.

For the most part, the list isn’t wholly interesting, mostly consisting of third-party Xbox 360 and Xbox One controllers and custom-designed variants, but if you delve into the list there are actually some really odd controllers that are compatible with Android 11.

One of the least weird controllers you can use with your Android 11 phone (which is really saying something about the other entries on this list) is the plastic guitar you needed to play Harmonix’s 2007 game Rock Band and its sequels.

Like the well-known Guitar Hero guitars, the main buttons on this small plastic guitar are four large ones on the fretboard (the light brown part of the picture) as well as a few dials, an effects switch, the whammy bar (that long metal stick) and a strum bar (that black and white thing below the fretboard.

Suffice to say, this was a controller designed to emulate playing guitar, not to control your smartphone. If you’ve got one lying around, though, it seems you can now use it to browse social media and answer calls, and given the rhythm action genre simmered down a few years ago, this will likely be the most use it’s gotten in a while.

It’s worth pointing out that it seems only the official Harmonix Rock Band Guitar actually works, not third-party versions. But there is another toy guitar that works, which we’ll explain below.

Next on our list is an periperhal sold for Xbox 360 players of Dead or Alive 4 fighting game, designed to emulate the styles of controllers you’d find in an arcade to appeal to real hardcore fans. It goes without saying that this is a fairly niche audience, and it doesn’t seem like this arcade stick was widely available, which is why we could only find a low-res image of it.

Compared to some of the other controllers on this list, we can picture how this would actually work as an Android 11 controller – it has a joystick and some buttons, after all – although it’s not clear how a piece of plastic with six buttons and a joystick decked out in decals will elevate your phone experience much.

Hori also made a similar controller for Soul Calibur V, and some other arcade-style sticks for Xbox 360, which are also compatible with Android 11, some of which will have a few more buttons.

Mad Catz is a prolific gaming peripheral maker, and by that we don’t just mean ‘standard console controllers’ – the Beat Pad is a controller designed for dancing games, similar to the Dance Dance Revolution arcade game, that gets you jumping around and dancing in order to control the game.

Well, this Beat Pad apparently also works with your Android 11 smartphone, so you can scroll through menus and text your grandparents while jumping around like a toddler who’s drunk too much cola.

Of all the entries on this list, the Beat Pad is arguably the weirdest, and it’s also the one we’re most interested to see in action controlling an Android 11 phone. Could this be a way to stay fit while checking out Instagram? Possibly.

From our research it seems Saitek’s AV8R02 Aviator Stick was was a peripheral designed for use with the Xbox 360 and PS3 game ‘Damage Inc’ – either way it was likely intended for use by flight simulator fans only, and it doesn’t seem like many were made.

It’s curious, then, that this is – by the looks of it – the only flight sim controller that works with Android 11. Of course ‘curious’ could be the defining feature of the ideas on this list.

This is a wired device too, so if you have one you’re going to need an adaptor to get it to work with your phone.

The Beat Pad wasn’t the only Mad Catz controller on the Android 11 compatibility list, and it wasn’t the only weird one either. Case in point, this wired portable drum machine designed for use in rhythm action games, which can now also control your phone.

Honestly, we’ve no idea how this would work, but we’d love to see someone try it. YouTube videos of people using drum controllers to complete popular video games are pretty popular too, so this could open the gate for the same with mobile games. Call of Duty: Mobile using only drum machines, anyone?

As mentioned, this is a wired device, though, and it’s certainly not as portable as other controllers on this list since you need to set it up. Still, if you like controlling your phones in weird ways, the Mad Catz Portable Drum lets you.

According to the Guitar Hero Wiki (which is apparently a thing) RedOctane’s X-plorer controller was packaged with the Xbox 360 port of Guitar Hero 2, which was released months after the game debuted on PlayStation 2, although it works with most music games on the console.

It’s another guitar controller, similar to the aforementioned Harmonix one except it’s wired and isn’t modelled after the beautiful Fender Stratocaster. As with that other guitar, we’ve no idea how this would work on an actual Android 11 smartphone, especially since it has even fewer controls than the Rock Band equivalent.

It seems odd that so many musical instruments can be used to control Android 11, alongside the slew of games controllers, and it’s a shame that most listed are no longer available to buy on the internet. If you have any of the above, though, you’re sure to have a new way to use your smartphone.

If you have one of the listed controllers (or any of the other new controllers listed on XDA Developers‘ website) you can apparently use it to control Android 11, or may be able to at some point in the future. These are the phones which currently let you trial the Android 11 beta. It’s worth pointing out we haven’t been able to verify if these controllers work, though, and their functionality come with the full roll-out later in 2020.