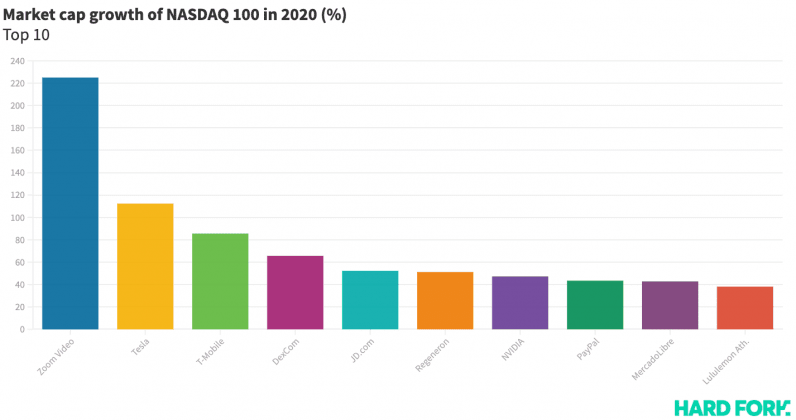 2020 has been a stellar year for the world’s biggest tech companies — but none have added more to their market values than video conferencing darling Zoom Video and Elon Musk’s Tesla.

Indeed, both Zoom and Tesla have multiplied their market caps this year, growth that outstrips every single company in the NASDAQ 100 (a popular index of large-cap stocks that includes tech’s biggest firms).

Zoom, the free video conferencing app that rose to prominence as COVID-19 spread across the world, started the year with a $18.99 billion market cap.

That number has since tripled to breach $61 billion, sending Zoom‘s market value beyond the likes of Activision Blizzard, Baidu, eBay, and Electronic Arts.

As for vehicle maker Tesla, its market cap was just $77.9 billion when 2020 began — well below the $100 billion average Musk would need to unlock his first payday worth $780 million.

Of course, Tesla would go on to pump, crash, and pump some more. During early trade Thursday, the company‘s market value was a touch over $165 billion, doubling in 2020 (and then some).

Tech giants like Amazon and Microsoft also did pretty well

Taking a look at the blue chip stocks like Amazon, Microsoft, and Apple — their market caps have grown too, but by smaller amounts: 32%, 15%, and 7% respectively

And as for which firms have lost the most: the NASDAQ 100’s bottom five (in terms of market cap growth) consists of travel stocks United Airlines and Marriott (-55% and -33%); cloud computing firm NetApp (-30%); storage device prince Western Digital (-30%); and retail lord Walgreen Boots (-27%).

Booking portals Trip.com and Expedia were next, having respectively lost 24% and 21% from their market values in 2020.

As for Zoom, the firm’s next trick will be to justify that newly-found market value, especially as world government’s begin to ease coronavirus restrictions.

Remember: it’s only June. Considering how volatile the stock market has been this year, it’s certainly not too late for the company to suddenly undo all of its miraculous growth.