Zoom’s web address is confusing the hell out of people 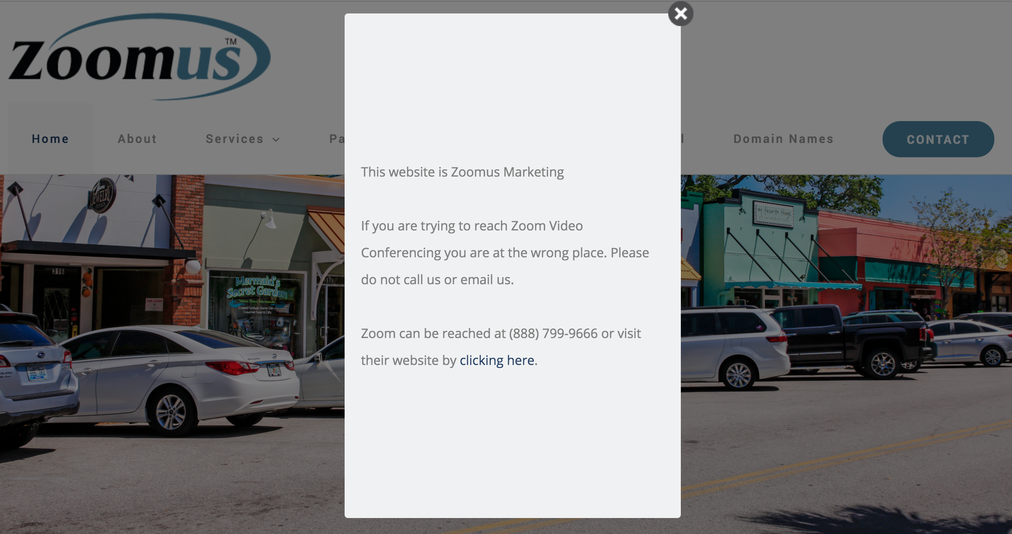 If you try calling Zoom, you may be greeted with a gruff voice asking, “Are you looking for Zoom dot-us or Zoomus Marketing?”

That’s Frank Cahill, who runs a small marketing company called Zoomus out of New Jersey. You can find its website at Zoomus.com. He does not work at Zoom, the massively popular video chat service, which is located at Zoom.us.

A lot of people seem to be getting the two confused.

Before the coronavirus, Cahill got calls from people looking for Zoom every once in awhile. He says he bought the Zoomus.com domain name in 2010 or 2011, back when Zoom was “very small and not known,” for around $5,000.

But the calls really started to come in when people across the country started to work from home in March.

“I have [Zoom’s] number posted on my wall so when people do call, I just give them their toll free number, because if I don’t they keep calling back,” he said. “I actually use their service every day of the week, which is ironic.”

According to Cahill, traffic to his website started to go up after the pandemic started. He received as many as four calls each day from users looking for Zoom and not his company, Zoomus.

“Whenever a company uses a non .com domain name and that extension is not a part of its brand, it risks traffic leakage,” explained Elliot Silver, who runs the popular industry blog DomainInvesting.com, in an email to Mashable.

Dot-com is king on the internet. A study that came out last year found that domains ending in .com are perceived as more trustworthy and more memorable to most people.

Furthermore, when the average internet user couldn’t remember what the domain extension was for a website they wanted to visit, they were most likely to assume it was .com.

“Zoomus.com is probably the most risky domain name for Zoom to not own,” said Silver. “But fortunately for them, it looks to be owned by a totally different business.”

Cahill is actually a blessing in disguise for Zoom. If Zoomus.com was registered to a bad actor, there could have been some real security problems for the company.

In March, cybersecurity researchers at Check Point released a report about the uptick in Zoom-related domains being registered by hackers since the pandemic.

“Zoom has been in the news almost every single day since this started so it’s becoming a more popular brand for phishing campaigns,” explained Mark Ostrowski, head of engineering at Check Point.

The security firm uncovered around 1,700 malicious domains being used to steal Zoom users’ private information. More than a month later, the number has gone up.

The fact Zoomus.com is owned by a legit business wasn’t Zoom’s only stroke of luck.

If you type Zoom.com in your web browser, the URL redirects you to Zoom’s website at Zoom.us. It didn’t always. In fact, the video conferencing company only took ownership of the domain fairly recently.

In late 2018, Zoom acquired Zoom.com for more than $2 million from a company that bought it a few months earlier. That company, Media Options, had planned to use Zoom.com for a domain name sales and consulting service before selling it to the video chat company.

Why doesn’t Zoom just change its main domain to Zoom.com? A company spokesperson explained in an email, “We did acquire the .com domain and in the near-term have been forwarding it to .us because that is where our existing infrastructure is and it is the familiar domain for our customers.”

Two million dollars for a domain name sounds like a lot. But imagine if Zoom tried to buy it now, after becoming one of the most trafficked sites in the world.

“I believe that acquisition turned out to be one of the best strategic moves the company made,” said Silver of DomainInvesting. “Had the company not acquired Zooom.com in 2018, the price to buy the domain name would have been much higher now, if another company had not bought it in the meantime.”

“If they didn’t own the .com version it would be a huge faux pas and, of course, very costly and confusing,” said Rick Schwartz, who is known throughout the domain name industry as the “Domain King,” in an email to Mashable. Over the years, Schwartz has owned some of the most premium domain names in existence, such as men.com and candy.com, and has sold them for millions of dollars.

“Since they do own the .com, then they have the luxury of branding any extension that they like,” explained Schwartz.

Zoom couldn’t have expected to get this big this fast. It has been around for nine years. At the end of 2019, Zoom announced it had 10 million users, mostly enterprise-level customers working at big corporations. The company now says it has 300 million daily active meeting participants.

Its new user base consists of students and teachers, families trying to stay in contact, and millions of businesses of all sizes — pretty much anybody looking to keep in touch with someone they aren’t quarantined at home with.

“One issue that could exist is that people may not trust the genuine Zoom.us url,” said Silver. “They may actually think the real Zoom.us domain name is attempting to impersonate Zoom.com.”

Mashable reached out to Neustar, the organization that runs the .US domain registry, about other large companies that built their name on the domain extension. While the registry provided some examples, like the websites for Mastercard and grocery chain Aldi, none came close to Zoom in terms of popularity.

“There are precious few websites in the world … that have a similar size and scale as Zoom.us,” a spokesperson for Neustar told Mashable.

“Zoomus.com is probably the most risky domain name for Zoom to not own,” said Silver.

Zoomus isn’t the only business getting bombarded with customers looking for Zoom. S2 Solutions, a software company out of Wyoming, makes PowerPoint creation software called Zoom. The app lives on the URL SimplyZoom.com.

However, if you type in Zoom.us.com, another common typo from people unfamiliar with non .com domain extensions, you’ll be forwarded to the app’s main site.

“In the beginning, we tried to forward those requests to Zoom video support but it has become too much by now,” he explained. The company reached out to Zoom to see if they were interested in the name, but never heard back.

There is a light at the end of the tunnel for companies like Zoomus.com and Zoom.us.com.

“Longer-term, we are planning a migration from Zoom.us to Zoom.com as we find this will be particularly beneficial as we expand globally, but we do not have a set timeframe for this,” said a Zoom spokesperson. “Zoom.us is a strong brand of its own and it is a large project to migrate this infrastructure.”

When Frank Cahill of Zoomus Marketing began to receive calls at 3 a.m. from Zoom users around the world, he knew he had to do something. So, now when you go to Cahill’s website, Zoomus.com, the first thing you’re greeted with is a pop-up message with Zoom’s number and a link to its website, Zoom.us.

“This website is Zoomus Marketing,” reads the pop-up message. “If you are trying to reach Zoom Video Conferencing you are at the wrong place. Please do not call us or email us.”

Cahill says the pop-up has helped, but he still receives calls “here and there” from people looking for Zoom.