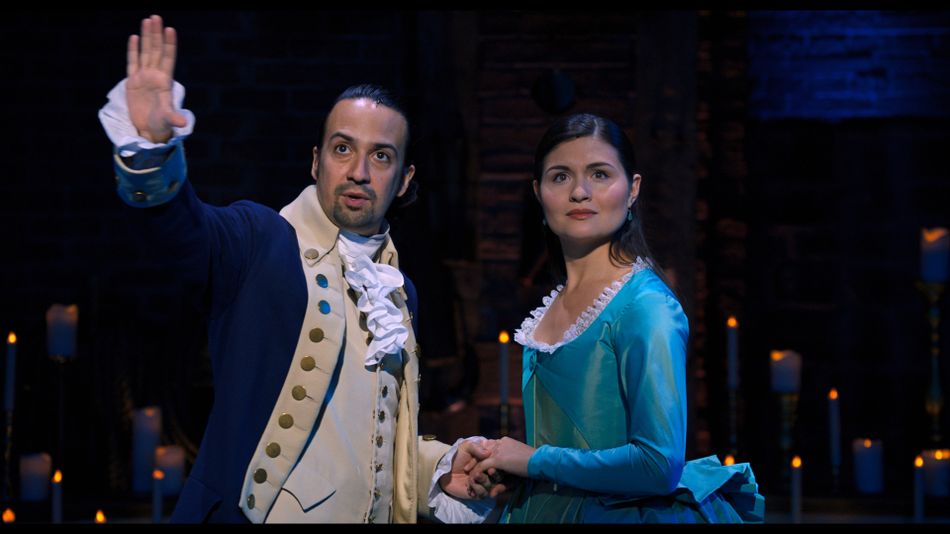 While Disney has created films in many genres over its lifetime, musicals are at the heart of the entertainment studio. Thankfully, Disney+ has made many song-filled stories available for streaming, including those dreamed up by Disney and other distributors. Whether you want to sing along to an animated classic like Hercules, a popular Broadway musical like Newsies, or a live-action favorite like Rodgers & Hammerstein’s Cinderella, there’s something out there awaiting your accompaniment.

Disney+’s musical collection is so abundant that we simply can’t cover every great one the streaming service has to offer — but here are a few song-filled films that are likely to be music to your ears.

Beauty and the Beast is an enchanting masterpiece. It has incredible Broadway-style tunes from Howard Ashman and Alan Menken, a swoon-worthy romance, and magical animations.

If you haven’t seen it in a while, it’s worth revisiting. You’ll be flooded with nostalgia when Belle sings about her little town in France, Lumiere serves her dinner to “Be Our Guest,” and the Beast invites her to a dance on the ballroom floor.

How to watch: Beauty and the Beast is now streaming on Disney+.

Whether you’ve just heard of “some Broadway show about Alexander Hamilton’s life” or can rap “Guns and Ships” at lightning speed, it’s probably a good idea to stream Hamilton.

The live recording of the stage show created by and starring Lin-Manuel Miranda premiered on Disney+ last July, and it’s hard to get through the whole thing without shedding a tear or two. The dancing? fantastic. The songs? Impossible to forget. The story? Awe-inspiring.

How to watch: Hamilton is now streaming on Disney+.

You watched Hamilton, you liked the songs, and now you want to find a different creation touched by the genius of Lin-Manuel Miranda? Good. You’ll probably like Moana.

The family musical has a Polynesian princess journeying across the ocean to locate a lost goddess and save her village, and while it’s more lighthearted than Miranda’s most famous work, its songs feature lyrics that are just as snappy. As an added bonus, Christopher Jackson, who plays George Washington in Hamilton, provides the singing voice to Moana’s father; Phillipa Soo, who plays Eliza, voices a villager. Did we mention Moana is also flat-out gorgeous and really comedic?

How to watch: Moana is now streaming on Disney+.

The Lion King goes hard. It opens magnificently with Mufasa presenting his newborn lion cub, Simba, to the animals of Africa while “Circle of Life” plays in the background. Then it gets even better as Simba learns about his responsibilities as the future king, deals with his regrets, and prepares to return to the Pride Lands. Its warm color palette is stunning, its story is stirring, and its songs — created by the one and only Elton John — are simply grand.

How to watch: The Lion King is now streaming on Disney+.

The Frozen franchise became so popular that you might have forgotten how good the original movie actually was. In the 2013 fantasy, Anna (Kristen Bell) tries to save Arendelle from her queen sister Elsa (Idina Menzel) after Elsa uses her magical ice powers to cast an eternal winter on the land. This makes for some gorgeous winter scenery and sets the stage for songs that — while maybe overplayed — are really fun. Frozen earns extra points for its sister-centric storyline that’s both sweet and feminist. (Editor’s opinion: The music in Frozen 2 is better. “Lost in the Woods” alone is a stirring bop.)

How to watch: Frozen is now streaming on Disney+.

Tangled is Frozen’s underrated summery counterpart. It has all the best parts of a classic princess story, including a strong lead heroine, cute animal sidekicks, and a lovely romance. But it’s also fast-paced, fresh, and mad funny.

Who doesn’t love a good adventure with a dashingly handsome bad boy love interest and some catchy bops sprinkled in? All the elements work together in harmony.

How to watch: Tangled is now streaming on Disney+.

We’re all in this together, right? Do we all realize just how engaging the High School Musical movies were? You can stream all three films in the trilogy on Disney+, but if you’ve got to choose one, make it the third.

As the only theatrical release of the series, High School Musical 3 has the highest production value. And because it’s about the East High gang preparing for graduation, there’s lots of massive musical numbers about things like basketball, prom, and the future. The show-stopping songs in this one are the best.

How to watch: High School Musical 3: Senior Year is now streaming on Disney+.

The Little Mermaid marks the beginning of the Disney Renaissance, the period between the late ‘80s through the ‘90s in which the animation studio put out some of its most memorable Broadway-style musicals to date. So naturally, this fantasy makes a splash.

As with Beauty and the Beast, The Little Mermaid features melodic numbers from music geniuses Ashman and Menken: “Part of Your World,” “Under the Sea,” and “Kiss the Girl,” to name a few. It’s also got pretty visuals, memorable side characters, and a free-spirited mermaid heroine who just wants to be human. What’s not to love?

How to watch: The Little Mermaid is now streaming on Disney+.

9. The Sound of Music

In The Sound of Music, a young Austrian woman (Julie Andrews) becomes governess to the seven children of Captain von Trapp (Christopher Plummer). This movie’s got a following for a reason. As if Andrews’ heavenly voice wasn’t reason enough to watch, the film soars thanks to its lush sceneries, melodic songs, and layered narrative. The drama just radiates warmth. If you’re in need of a comfort watch, this is a fail-safe option.

How to watch: The Sound of Music is now streaming on Disney+.

This fantasy has the stories of Cinderella, Little Red Riding Hood, Rapunzel, and other fairy tale characters colliding deep in the forest, where everything can change in a moment. And though Disney’s 2014 take on the 1980s Broadway musical of the same name isn’t quite as dark as the original, it’s still plenty amusing and surprising.

The cast is stacked (Meryl Streep, Emily Blunt, Anna Kendrick, and more), the music is rhythmic, and the characters’ obstacle-filled journeys are entertaining. Bonus: Chris Pine plays a prince who rips open his shirt during an unforgettably dramatic performance of “Agony.”

How to watch: Into the Woods is now streaming on Disney+.

11. The Hunchback of Notre Dame

Disney’s take on Victor Hugo’s novel of the same name about the lonely bell ringer of Notre-Dame Cathedral is underrated. Sure, it’s not as cheery as Disney’s other works; it touches on dark themes like lust, damnation, and genocide. But its hand-drawn depictions of Paris are whimsical, its musical numbers are sweeping, and its narrative is thoughtful.

If you watched Hunchback as a kid, there’s probably a lot that went over your head. You’ll develop a new appreciation for the sophisticated story and touching conclusion as an adult.

How to watch: The Hunchback of Notre Dame is now streaming on Disney+.

Maybe it has been 60 years since Sleeping Beauty came out, but this dreamy fantasy still holds up. Disney’s take on the traditional fairy tale about a princess who must be awoken from a curse has been enchanted by a gorgeous orchestral soundtrack and rich animations. It also marks the beginning of Maleficent, a Disney villain so iconic she got her own live-action movie decades later.

How to watch: Sleeping Beauty is now streaming on Disney+.

13. The Princess and the Frog

Though The Princess and the Frog premiered in theaters in 2009, it has a wistful feeling reminiscent of the Disney musicals that came before it in the ‘90s. Set in 1920s New Orleans, the rom-com fantasy follows 19-year-old waitress Tiana who, after being turned into a frog in an attempt to kiss a prince back to his human form, must find a way to get back to her old life. With a hardworking heroine, a jazzy soundtrack, and just a dash of romantic tension, Princess and the Frog serves up a whole lot of charm.

How to watch: The Princess and the Frog is now streaming on Disney+.

Chim Chim Cher-ee, you should be streaming Mary Poppins right now — especially because Julie Andrews, animated penguins, and chimney sweeps are a lot of fun. The classic musical really shows off the skills of its multi-talented cast, especially because so much dancing and singing was demanded of them. (Who would have thought being a nanny to children in London would be so much work?) When you’re done with this one, you can move on to Saving Mr. Banks, the 2013 period drama loosely inspired by the creation of Mary Poppins, or the 2018 musical sequel, which has Emily Blunt stepping into the lead role.

How to watch: Mary Poppins is now streaming on Disney+.

Let’s get down to business and stream Mulan. While the 2020 live-action remake decided to forgo any musical numbers (and sadly, everyone’s favorite dragon, Mushu), the animated original lets “Reflection,” “A Girl Worth Fighting For,” and “I’ll Make a Man Out of You” steal the show. And guess what? Mulan is still a total badass as she enters the war in the place of her father in a mission to save all of China. It’s full of humor, heart, and Huns that pop out of the snow like daisies.

How to watch: Mulan is now streaming on Disney+.

Though Anastasia isn’t actually a Disney movie, it shares a lot of similarities with the studio’s famous animated musicals — and it joined the Disney+ collection last December. The film follows a girl named Anya (Meg Ryan) who gets tangled up with a couple of con men hoping to present her in Paris as the long lost princess of Russia. This setup lends itself to enchanting hand-drawn animations, charming songs, and a glittering romance. If you somehow skipped it while you were young, it’s worth visiting now.

How to watch: Anastasia is now streaming on Disney+.

This 2011 Muppets film, which has Kermit and friends attempting to save their studio, has the cleverly absurd humor you’d expect from the franchise. Plus there’s a bunch of Hollywood cameos, show-stopping pizzazz, and an Academy Award-winning song, “Man or Muppet.” The film perfectly blends spirited fun with deep-rooted nostalgia.

How to watch: The Muppets is now streaming on Disney+.

Aladdin has its titular hero attempting to get off the streets of Agrabah and turn his life into something more after he comes across a magic lamp and is granted three wishes. It’s also got Robin Williams as the Genie, an underdog redemption plot line, a colorfully animated land, and an adventurous soundtrack with songs like “One Jump Ahead” and “Friend Like Me.” Really, what doesn’t Aladdin have?

How to watch: Aladdin is now streaming on Disney+.