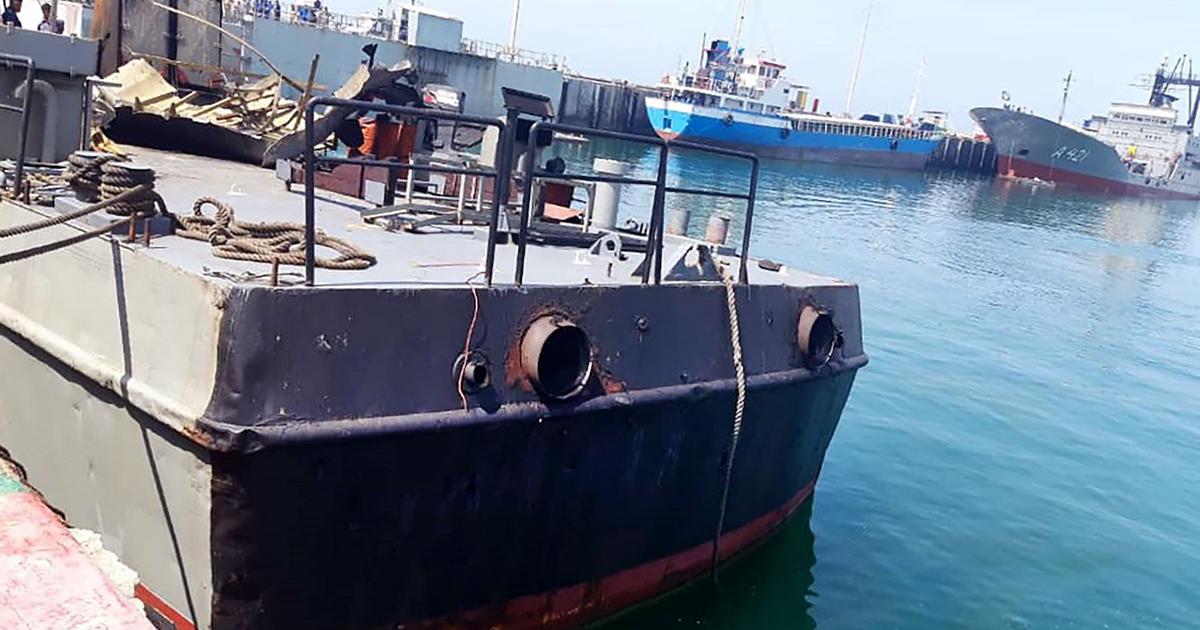 Iran’s military accidentally hit one of its own ships with a missile during a training exercise on Sunday, according to a new report from Iran’s Islamic Republic News Agency. At least 19 people were killed and 15 were wounded, according to several reports early Monday, a substantial revision from earlier official reports that claimed only one sailor had been killed.

The damaged vessel was reportedly a multi-purpose support ship known as the Konarak in the Gulf of Oman near the strategically important Strait of Hormuz. The missile was launched from the Iranian Navy’s frigate Jamaran, according to Al Jazeera, a vessel that Iran refers to as a “destroyer.” Al Jazeera, which is based in Qatar, speculates the Konarak was placing targets in the water and was perhaps too close to the targets when the Jamaran launched a missile. That speculation has not been confirmed.

Iranian state media, which repeatedly refers to the dead as “martyrs,” published an official photo purporting to show the Konarak ship, but there doesn’t appear to be much damage to the vessel, as you can see above. Al Jazeera’s earliest reports indicated the Konarak was likely sunk but, again, that hasn’t been confirmed. At least 20 Iranian crew members could still be missing, according to the New York Times.

“Naval relief and rescue teams reached the location shortly after the incident, retrieving the injured and the martyrs from the vessel and transferring them to medical centers,” a statement from the Iranian Navy said, according to Iran’s Press TV news outlet.

Iran’s state news agencies IRNA and Press TV both appear to be blocked inside the U.S. as of 6:00 a.m. Monday morning but can be accessed using a VPN routed outside of America’s jurisdiction.

Iran also reported several attempted cyberattacks against its networks near the Strait of Hormuz on Sunday, according to the Jerusalem Post, though it’s not clear whether those cyberattacks are related in any way to the Iranian Navy’s accident yesterday.

Iran’s Jamaran guided-missile destroyer, fires, in an exercise, in the Persian Gulf, Iran, Sunday, Feb. 21, 2010.
Photo: AP Photo/IIPA, Ebrahim Norouzi
In this photo released by the International Iran Photo Agency, IIPA, the Iranian destroyer Jamaran launches a torpedo during a maneuver in the Oman Sea in a part of Iranian southern waters off the port town of Bandar Jask about 1050 miles (1690 km) south of Tehran, Sunday, May 9, 2010.
Photo: AP Photo/IIPA, Abolfazl Nesaei
In this photo taken on Sunday, Feb. 21, 2010, two clerics stand at left, as Iran’s Jamaran guided-missile destroyer, and navy members prepare for an exercise, in the Persian Gulf, in Iran.
Photo: AP Photo/IIPA, Ebrahim Norouzi
This photo released by the official website of the Iranian supreme leader’s office shows Iranian supreme leader Ayatollah Ali Khamenei, second right, during launching ceremony of the Jamaran guided-missile destroyer, as Iran’s naval chief, Adm. Habibollah Sayyari talks to him, in the Persian Gulf, Iran, Friday, Feb. 19, 2010.
Photo: AP Photo/Office of the Supreme Leader

Iran’s missile mishap comes at a stressful time for the world at large, as the coronavirus pandemic ripples around the globe and the U.S. continues to present an aggressive posture towards the Iranian regime. Iran currently has over 107,000 confirmed cases of covid-19 and over 6,600 deaths, while the U.S. has over 1.3 million identified cases and over 79,500 deaths, according to the Johns Hopkins University coronavirus tracker. Both countries likely have many more cases and deaths but suffer from a lack of effective public health strategies to fight the disease.

President Donald Trump in particular has displayed an itchy trigger finger for Iran all year, starting with the assassination of Qassem Soleimani, a top Iranian general with the Islamic Revolutionary Guard Corps, through a drone strike in Iraq on January 3. Things became so panicked in the U.S. after Soleimani’s assassination that rumors started to circulate in Gen Z social media channels that the U.S. would soon be instituting a military draft. The rumors were untrue, of course.

The Trump regime withdrew from a peace deal with Iran in May of 2018—something Trump derisively calls the “Iran Deal”—and the assassination of Soleimani prompted Iran to retaliate with an attack on American forces in Iraq on January 8. The U.S. initially denied that anyone had been injured in that attack, only to admit by February that at least 109 U.S. service members suffered traumatic brain injuries. In the chaos following the assassination and Iran’s revenge on American troops, Iran accidentally shot down a Ukrainian passenger plane, killing all 176 people aboard.

Trump has continued to maintain a hawkish position against Iran since January, insisting last month that any harassment from Iran would be met with destruction. Though, lately Trump’s anger seems to only be demonstrated in tweets rather than any assassination attempts on foreign officials.

“I have instructed the United States Navy to shoot down and destroy any and all Iranian gunboats if they harass our ships at sea,” Trump tweeted on April 22.

It wasn’t clear whether Trump was attempting to change the rules of engagement, nor what “harassment” might entail in the strictest sense, but like most of Trump’s unhinged rants, things appear to be moving along as normal.

Which is to say, everything is still terrible and dangerous and we’re always one misunderstanding away from starting World War III—just like any other Monday in 2020, really.