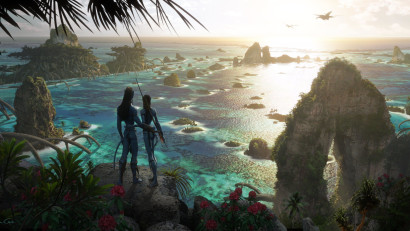 io9’s first article mentioning Avatar 2 was published on December 28, 2009. It was during the site’s second year of operation and also the year James Cameron released Avatar, a 3D adventure that would go on to become the highest-grossing movie of all-time. No movie makes that kind of money without there at least being talk of a sequel and that talk, at least on this site, began days after the original’s release.

“The planet that Pandora orbits is called Polyphemus, and it’s the primary for a system of moons,” writer-director James Cameron said, prompting our article. “We have some story ideas for how to branch out into other moons of Polyphemus and the Alpha Centauri A solar system.”

And just like that, the wait for Avatar 2 began. Fast forward over 10 years and the sequel to the now second highest-grossing movie of all time is still, if you can believe it, over a year away. That is if the current December 17, 2021 release date holds. Release dates tend not to hold with Avatar 2, and those are just some of the major things that have happened surrounding the film in the past decade.

December 28, 2009: Our first article on a possible Avatar 2 with the aforementioned quote. The original movie had opened only a week prior.

January 15, 2010: James Cameron acknowledges he had been thinking about sequels while making the original. “I’ve had a storyline in mind from the start – there are even scenes in Avatar that I kept in because they lead to the sequel,” he said.

February 2, 2010: The first rumors of Avatar 2‘s potential plot surface. “The inevitable sequel will be a huge war movie, with war breaking out early on in the film. And it’ll be made within four years, say unnamed sources.” Those sources were…incorrect. Meanwhile, the original film was entering its eighth week of release and crossed $600 million domestic, beating Titanic to take the number one spot on the list of highest-grossing domestic releases.

March 2, 2010: Cameron says Avatar 2 probably shouldn’t be called that because the main character, Jake Sully, is no longer an Avatar.

April 16, 2010: io9 interviews Avatar producer Jon Landau, who says deals on Avatar 2 still need to be worked out but that Cameron has begun researching by visiting Brazillian native tribes.

September 4, 2012: Landau confirms scripts are being worked on and technical development has begun, but he and Cameron are in no rush. “We’re going to make the best possible version of these movies, and they will come out when they are exactly that,” he said.

January 10, 2014: Construction begins on Pandora: The World of Avatar, a full section of Disney’s Animal Kingdom in Orlando, Florida.

June 17, 2014: Cameron reveals that he’s hired other writers to work on the sequels with him. They are Rick Jaffa, Amanda Silver, Josh Friedman, and Shane Salerno. That and much more comes out of an in-depth New York Times article called “For Fox, Much Is Riding on 3 Sequels to Avatar.” Yes, there are now three sequels to Avatar and they’re scheduled for release December 2016, 2017, and 2018.

December 23, 2015: A year before the scheduled release, Cameron reveals that he needs another year. December 2017 it is.

September 7, 2016: After six years of rumors and speculation, Cameron finally reveals what the Avatar sequels are actually going to be about. “The storyline in the sequels really follows Jake and Neytiri and their children. It’s more of a family saga about the struggle with the humans,” he says.

May 27, 2017: Pandora: The Land of Avatar opens at Walt Disney World resort in Orlando, Florida. The land exists in a time centuries after the movies take place so all is well on Pandora at the end of the films.

August 8, 2017: It’s revealed that Stephen Lang, the villain who died in the first Avatar film, will be back as the villain in ALL of the Avatar sequels.

November 21, 2017: The young cast of Avatar 2 talk about learning to hold their breath to film scenes underwater.

June 12, 2018: A rumor comes out that Avatar star Zoe Saldana may be done filming her parts for the first two Avatar sequels.

November 2, 2018: Several rumored titles of the four Avatar sequels are released including “The Seed Bearer.” Those titles remain unconfirmed.

December 18, 2019: The 10 year anniversary of Avatar. And, to celebrate, Cameron explains why this shit has taken so long. “From 2013 until now we’ve mostly designed the whole world across four new movies,” Cameron said. “We’ve written, finished scripts for all four of those films. We’ve cast them, and we’ve [performance] captured movie two, movie three, and the first part of movie four. We’re mostly done with the live-action. I’ve got a couple months in New Zealand in spring, so we’re kind of on track with what we set out to do.”

And that brings us to 2020. In alternate timelines, we’ve already seen Avatars 2 and 3 multiple times. In reality, due to covid-19, one has to think there’s at least a chance Avatar 2 could be delayed yet again, depending on how Disney deals with its upcoming film releases and production. Nevertheless, the journey has been long and strange, almost like a Na’vi braid. And, eventually, that braid will intertwine with your eyeballs and we’ll get to see the continuing adventures on the planet Pandora.