A Guide to Tony Soprano’s Many Robes 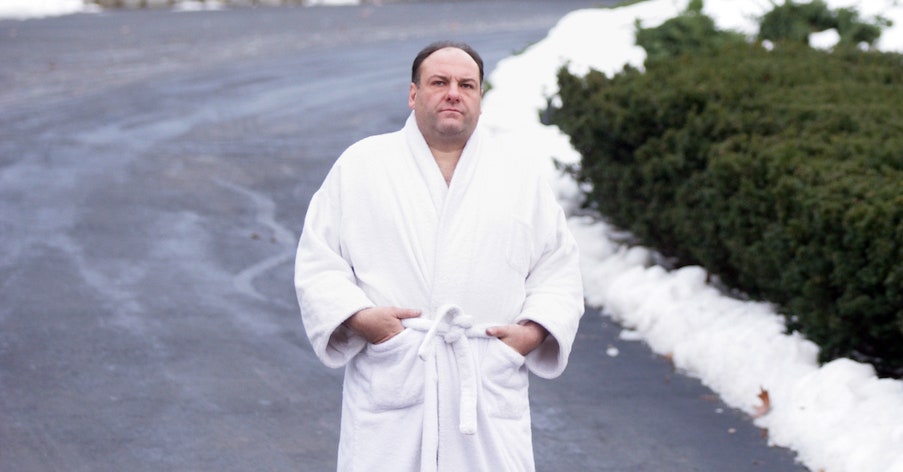 As an Italian-American, I’m required by law to talk to you about the pop culture recountings of our mafia history. There are the obvious touchstones: Goodfellas and The Godfather. I even sat through all three and a half hours of The Irishman at a cramped Broadway theater. (Remember when we could do things like that?)

But The Sopranos is a show that changed not only television, but the entire mobster storyline. It also famously left millions of its fans screaming in their living rooms when the finale aired—it concluded so abruptly, I vividly remember my own family thinking the cable had cut out. But this isn’t a story about mafioso tropes. It is about the quarantine fashion inspiration I found in an unlikely source: Tony Soprano’s robes.

There’s a lot of great fashion in the six seasons of the HBO drama: fantastic button-down shirts, Silvio’s impeccable suits, the women’s wardrobes that perfectly encapsulated the New Jersey style of the early 2000s. But with the coronavirus pandemic forcing us into a new reality of being homebound, none of that fashion matters more than loungewear. Take it from someone who has worked from home for over two years, nothing beats lazing around your house all day in a robe.

Tony’s robe collection was vast, so here are some of the best ones he wore on The Sopranos, along with links to where you can buy similar versions. If you aren’t sure which one to go with, remember what the man himself said: “More is lost by indecision than wrong decision.”

If you buy something using the links in our stories, we may earn a small affiliate commission. Here’s how this works. You can also support our reporting and reviewing by purchasing a 1-year print + digital WIRED subscription for $5 (Discounted).

You can’t go wrong with a classic, like the white and dark grey soft cotton robes Tony most frequently wears throughout the show’s six seasons.

Brooklinen’s Super-Plush Robe, which comes in white, dark gray, and light gray, is a perfect foray into robedom. Its thick material and deep pockets made me feel like I was staying in a fancy hotel instead of my own apartment for weeks on end. It’s great for lounging on the couch at night with a glass of wine, as well as for putting on right after a shower.

One day last week, I wore this as I finally emerged from the depths of my apartment to bring the trash to the bins on the sidewalk. As I looked down at my furry slippers, I truly felt like Tony as he meanders down his driveway to pick up the paper in his mule slippers, robe open to the world.

Fit for a Boss

There are many famous scenes from the Sopranos that might come to mind, like the ending of the series, or Christopher and Paulie eating ketchup packets while lost in the woods. But there is nothing quite like the pilot episode where Tony walks into his pool in his robe to feed the ducks. I mean, murders aside, you gotta love a man who loves animals, right?

The robe in question is a sleek tan number trimmed with lavender and monogrammed with an S; truly a luxurious piece of bedroom attire. The real one was auctioned off, but you can get your own family initials embroidered on the Pottery Barn Piped Trim Hotel Robe. It has a soft waffle knit and is easy to care for.

Tony’s large print plaid robe is like a time capsule. It’s unlike anything I’ve seen before, as if the ’90s cup design was reimagined as clothing. A deep internet search has led me to believe it’s a Bill Blass chenille bathrobe like this vintage one that sold on Etsy in 2019. Though I don’t think anything could replicate it exactly, you have a few options.

Samsung Galaxy Z Fold 4: What we want from the new foldable

Samsung Galaxy Z Fold 4: What we want from the new foldable