After Fortnite ban, iPhones with the game pre-installed are selling for thousands 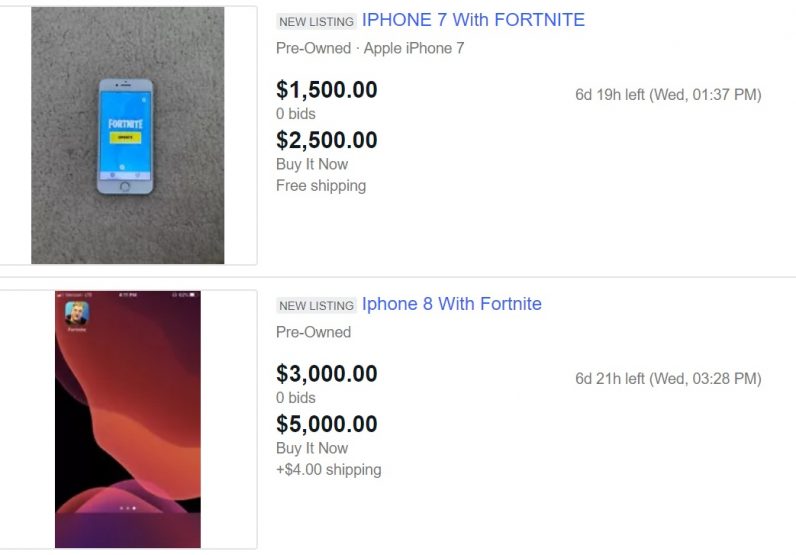 Sometimes weird things on eBay sell for the most ridiculous prices — and now you can add mobile Fortnite to that list. Sellers are listing iPhones with the game installed for ridiculous prices. And the best (or maybe worst) part is that someone might actually pay those prices, because currently there’s no other way to get Fortnite on an iPhone.

You may have heard that Apple and Epic Games are in a stand-off over the issue of App Store policies. It’s a sordid affair, and I won’t bore you with all the details, which you can read here. Essentially Apple has banned Fortnite from the App Store, at least until the legal issue is resolved. As much as I enjoy watching two enormous companies duke it out over who gets to keep a giant pile of money, the effect this has had on actual gamers has been a decidedly negative one: at the moment, you cannot download Fortnite on an iPhone that doesn’t already have it.

Now a curious thing has happened. Used iPhones are starting to show up in listings on sites like eBay. They’re unremarkable except for the fact that they have the now-verboten game installed, and the sellers are not hesitating to ask premium for them. Business Insider reports some of these listings have prices as high as $10,000 — yeah, you read that right. There’s a hustle, and then there’s a scam, and I can’t help but think these listings are tapdancing from one to the other with abandon.

When I looked at eBay, I didn’t see any sums quite that ambitious, but there were several phones with four-figure listings — and we’re not talking high-end iPhones, but some older models as well. The only feature they have in common is an install of Fortnite. And for the record, it isn’t just eBay: I found similar listings on sites like LetGo and OfferUp, with the same prices.

Whether anyone’s buying these phones is a different matter — the sellers can be as shameless and rapacious as they wish, but that doesn’t necessarily mean anyone’s buying it. I’d be curious to see if anyone actually buys these iPhones. Frankly, I’m kind of worried some younger Fortnite players might convince their parents to spend a price like this, without the understanding that the detente between the two companies is unlikely to last forever. But that’s me being a little protective.

Note that the majority of phones being sold in this manner are iPhones. I saw one or two Androids while skimming the listings, but not many, and those that were there weren’t being offered for the princely sums the iPhones apparently commanded. While Fortnite is also banned from the Google Play Store, there are ways of getting the game onto an Android phone without having to go through that store. It can be sideloaded from Epic’s own site, for example. There are a few listings with three-figure prices, but they appear to be only slightly exaggerated from the normal price for used, recent model Androids.

Still, even if someone buys it (and doesn’t experience some brutal buyer’s remorse if and when Apple reinstates the game), they still have one problem. Because Apple’s banned the game, Epic can no longer support the game and roll out updates to keep it running. That means one good iOS update might render the game unplayable, and we’re due for one of those soon.

So yeah, as if Epic trying to weaponize Fortnite players and Apple and Google prying the game away wasn’t bad enough, now we have yet more people trying to gouge Fortnite fans for money. If anyone wants my opinion, I say wait until the legal battle subsides — I highly doubt we’ve seen the last of the game on the App Store.

Did you know we have an online event about ecommerce coming up? Join the Checkout track at TNW2020 to explore the latest retail tech innovations and best practices.