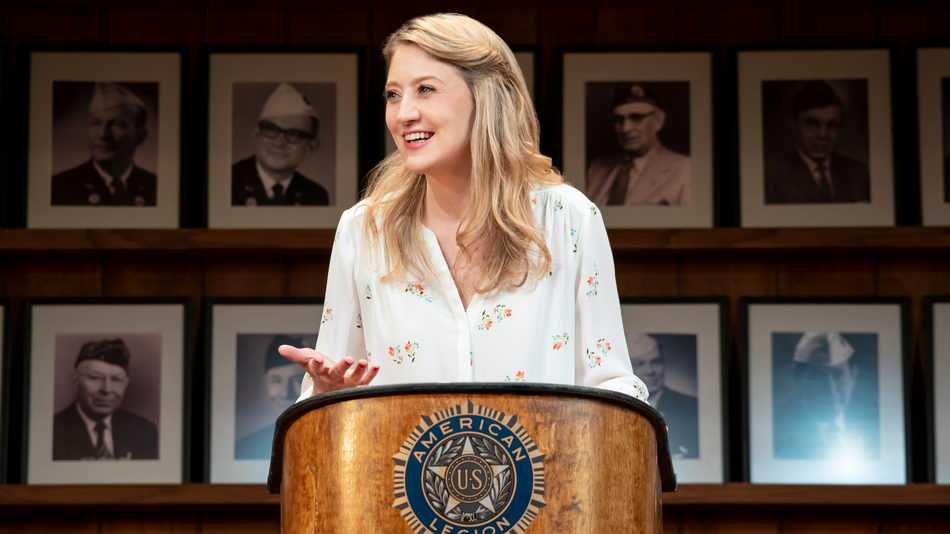 All products featured here are independently selected by our editors and writers.If you buy something through links on our site, Mashable may earn an affiliate commission.
By Erin Strecker2020-10-13 09:30:00 UTC

What the Constitution Means to Me is a show with an incredible sense of timing.

The autobiographical play by and starring Heidi Schreck finds her looking back at herself at 15 — a girl who competed in American Legion debate contests about the Constitution to earn money for college, thinking it was this great, magical document.

Her upbeat teen self compares the Constitution to a witch’s cauldron, where amendments and clauses are mixed in all together and boil into something even greater. But horror lurks beyond her bright smile and A-student pep. As she grows up, adult Schreck movingly traces how, actually, this document has let down the women in her family for generations, beginning with a great-great-grandmother who was a mail order bride and died at 36 in a mental institution from “melancholia.”

The play about who the Constitution does and doesn’t protect felt deeply of the moment when it was a small downtown NYC work in 2017 as we were just beginning to see the horrors the newly inaugurated President Trump was inflicting on this country, then felt uncomfortably close to home in the wake of the Brett Kavanaugh hearings. Now, a taped performance of the incredible work is available to stream beginning Friday on Amazon Prime — just when the show becomes even more relevant anew, as we yet again bear witness to a painful Supreme Court confirmation hearing and wonder, when, exactly, we aren’t going to have to fight for our rights every single day.

The “we” of the previous sentence is called out explicitly in the show, as Schreck takes great pains to remind audiences that “woman” isn’t mentioned once in this document teen her so idolized. The Constitution was by and for white, landowning men. “Our bodies had been left out of the document from the beginning,” Schreck explains.

Her deeply personal play has stuck with me since I first saw the show a few years ago, and watching it again onscreen is both a thrill and a chilling call to action. What the Constitution Means to Me is in some ways a history lesson about the document come alive, with Schreck detailing how amendments can bond together to enshrine rights we didn’t know we had, and powerfully showing the damage that has been done in its name — to immigrants, to slaves, and to victims of domestic violence. But it’s to Schreck’s credit that she makes sure the punches in this Pulitzer-finalist work land far too intimately to be kept at a historical remove.

Some of the most jarring moments are when director Marielle Heller lets the camera linger on an audience member — viewers will clock individuals smiling at each other knowingly when Schreck is making deeply relatable comments about being a teen girl who just wants to make out with some boys. Far more often, however, the camera silently pans to a woman with tears running down her face. It’s an added closeness that drives home how universal the deeply personal confessions Schreck is sharing here are: about her abortion as a young woman; about the fear that the men we love will become our abusers; that living in a patriarchal society is just really fucking hard sometimes.

It’s an added closeness that drives home how universal the deeply personal confessions Schreck is sharing are.

When the filmed audience bursts into spontaneous applause after Schreck plays audio of a famous Ruth Bader Ginsberg quote (remember what I said regarding this show’s eerie timing?) about how it won’t be “enough” until there are nine female Supreme Court justices, it’s cathartic. By clearly outlining the problems in our country right now, Schreck provocatively ushers in a debate about the future.

It’s a tragicomedy through and through, but there’s hope here, too. The last 15 minutes feature Schreck bringing out 14-year-old high school debate star Rosdely Ciprian, and the two of them have a live debate about whether or not the Constitution should be abolished: Is there stuff worth saving here? How can we trust the people in charge now to do better?

The back and forth is inspiring to watch as the two argue about hopes for tomorrow and the belief in what is worth fighting for. The past is decorated with horrors, but with passionate people like Ciprian leading the way, well, you come away thinking that despite all the current shit, maybe, just maybe, there’s still a chance for the future to be a bit brighter.

What the Constitution Means to Me is streaming on Amazon Prime Video Friday.