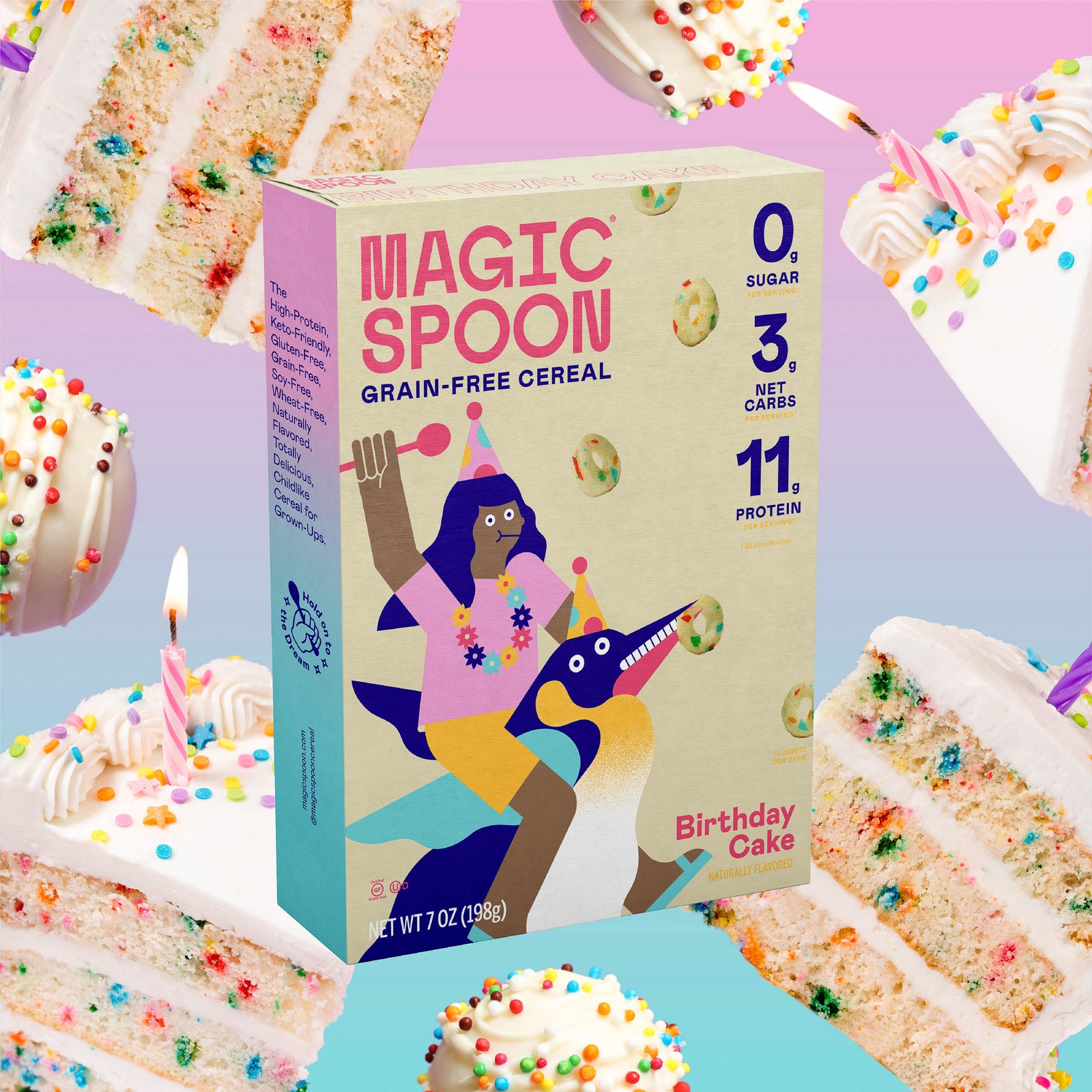 Birthdays in quarantine have mostly been bittersweet, lonesome affairs. On Instagram, those who celebrated in April blew out candles in solitude or posted photos of their living rooms, filled with number-shaped balloons but absent any guests. There’s not much fun on a birthday when it’s a party of one.

But there was plenty of fun at Magic Spoon, a cereal startup celebrating its first year in business. The brand filled its Instagram with technicolored squares of birthday cakes, sprinkles, and heaping bowls of the high-protein, low-carb cereal it sells for $10 per beautifully illustrated box. Making it through year one as a startup seemed like cause for celebration, but so was the last month of sales, some of the highest Magic Spoon has seen yet.

When Magic Spoon launched last April, it hoped to do for cereal what Warby Parker did for eyeglasses, or what Quip did for toothbrushes: Take a familiar everyday product, give it an Instagrammable glow up, axe the middleman, and send it straight to customers’ doors—direct to consumer, as the buzzy business model is often called. Cereal was ripe for disruption, a multibillion-dollar market dominated by stodgy conglomerates and beset by years of flagging sales. Magic Spoon targeted health-conscious millennials with keto-friendly ingredients, whimsical packaging, and flavors that harken to childhood favorites: fruity, frosted, cinnamon, cocoa. The startup raised $5.5 million in seed funding, along with personal investments from the kingmakers of direct-to-consumer companies: Joey Zwillinger (the cofounder of Allbirds), Jeff Raider (the cofounder of Harry’s), and Dave Gilboa and Neil Blumenthal (the cofounders of Warby Parker) all chipped in, as did musician Questlove and Digg.com founder Kevin Rose.

Launching a direct-to-consumer brand—often shortened to DTC, or D2C—doesn’t automatically confer the luster it did a few years ago, though. The approach that catapulted startups like Casper, Glossier, and Dollar Shave Club to billion-dollar valuations was already showing some strain even before the pandemic. Competition was growing, and so were costs. The results were not always sustainable, leading to recent high-profile flops like Outdoor Voices and Casper’s public market debut. Investors started to demand profits, not just new customers. And then came Covid-19.

Magic Spoon does not appear to be as vulnerable to the pandemic’s shockwaves as some of its other DTC brethren so far. The Brooklyn-based company had spent the past year ramping up manufacturing, bulk-buying its specialty ingredients, and learning how to produce even more and more of the brightly colored boxes. When the pandemic hit, those things came in handy. “In general, we’ve been fairly unaffected in the supply chain,” says Greg Sewitz, the other cofounder. And they’ve seen more demand. Since the pandemic began, Lewis says Magic Spoon has seen “a meaningful jump month to month, greater than anything we’ve seen in prior months.”

Magic Spoon isn’t alone. Other direct-to-consumer companies are experiencing a boost. Otherland, which makes candles, and Tracksmith, which sells activewear, have both reported bumps in sales. So have loungewear makers like Lively, and Thinx, which makes period-absorbing underwear. (“Periods don’t stop for pandemics,” says a banner on the company’s website.)

Direct-to-consumer food startups, in particular, are seeing a huge difference. “Most people were already comfortable buying online, and across most retail categories,” says Andrew Lipsman, the principal retail analyst at eMarketer. “Where the pandemic is making a difference is in the food and beverage category, which had been slow to shift online.” More people are cooking at home when bars and restaurants are closed, and while grocery stores remain open, fears of contracting the virus have led shoppers to seek out other options.