An Alien War Took Over Grand Theft Auto V. It Could End Tonight 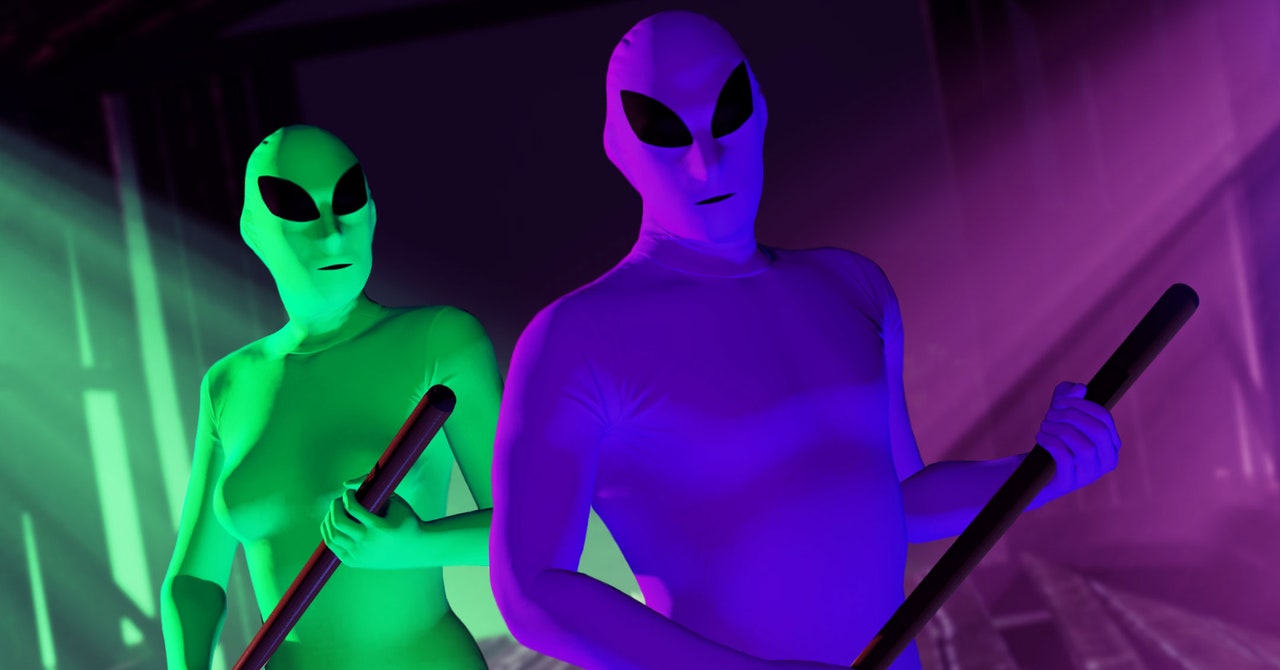 Adam Long was scrolling through the Grand Theft Auto V subreddit when he saw game footage of some guys jumping out of a van and beating the living crap out of a random guy. To anyone else, it might have looked like a little videogame griefing; for 18-year-old Long, it was the inspiration that would spark social media phenomenon.

“All of a sudden they punch him and beat him to death,” Long says. “I thought it was the funniest thing ever. I sent it to a group of friends on Snapchat and said we had to do something like it.”

Back in GTA V, an open-world role-playing game with an online component, Long and his two friends settled on a “roving gang of aliens” vibe with matching green martian suits for their avatars. They hopped in a van and drove around, looking for players who were alone, preoccupied, and unassuming. Then they jumped out, grabbed baseball bats, and knocked them dead. “Hit and run,” says Long. “We pissed ourselves laughing.”

Long’s video of one such encounter, titled “You came to the wrong planet foo,” went viral on Reddit. Mimicking Long’s gang, a slew of players purchased green alien suits and baseball bats to menace GTA V innocents. Sometimes they’d yell out “vibe check!” before striking. Some used a golf club instead of a baseball bat. In protest, players donned purple alien suits and rose up against the bully green gang members. Over the last month, Reddit, Instagram, and especially TikTok have been overrun by clips of green and purple aliens menacing each other and the virtual society. That’s how the alien war started.

“It’s stupidfun,” says Kieran, 19, who started the trend with Long, adding that the purple gang are “wannabees and clout-chasers versus the established green gang.”

The GTA community is quite toxic, to put it lightly.

After a month of alien wars, a final showdown takes place today. All day, but specifically at 8 pm ET, green gang and purple gang will go head to head in GTA V’s Los Santos International Airport. No guns, only bats and other melee weapons. To celebrate, publisher Rockstar Games hopped on the trend itself, making GTA V free for PC players on the Epic Games Store along with the alien suits, which formerly cost over $300,000 of in-game money. According to GTA V Discord moderators interviewed, this is the game’s biggest event in years.

But although the final fight will take place within the bounds of GTA V, the roiling, destructive energy that brought the gangs to arms has bled far outside the videogame itself. A deeper look reveals that some GTA V players have escalated the alien wars to a series of kiddie-pool cyberattacks against rivals.

When we first spoke, Jazuka, who runs a purple gang Discord group, demanded to know how I found him and proof that I was “real.” He also needed to remain anonymous; green gang members have “tried funny stuff” on him, pretending to be all sorts of people in an attempt to gain admin privileges over the Discord. “It’s basically acts of sabotage to try and weaken the purple gang,” he says.

Jazuka isn’t the only server moderator to describe out-of-bounds attacks on rival gang members. In another Discord group, GreenVSPurple Official, which contains 3,000 users, moderators have received dozens of complaints a day about rampant toxicity, use of slurs, and phishing attacks. They hear daily reports of denial of service attacks—trollish efforts to keep them offline—against members of the rival gang. “At first it was like friendly banter. Then it got pretty bad. Kids were pulling IPs from the opposite gang, etc.,” says a moderator who goes by Mike.

“At first, we didn’t think we would need to enforce rules on toxicity, sexism, etc.,” said Matt, another moderator. “But it got really bad, to the point people were leaking each others’ address just for being a part of the other ‘gang.’” In other GTA V alien Discord groups and subreddits with less hands-on moderation, players regularly refer to the opposite gang using racist, sexist, homophobic, and ableist slurs. Open threats to DDoS players appear in several servers.