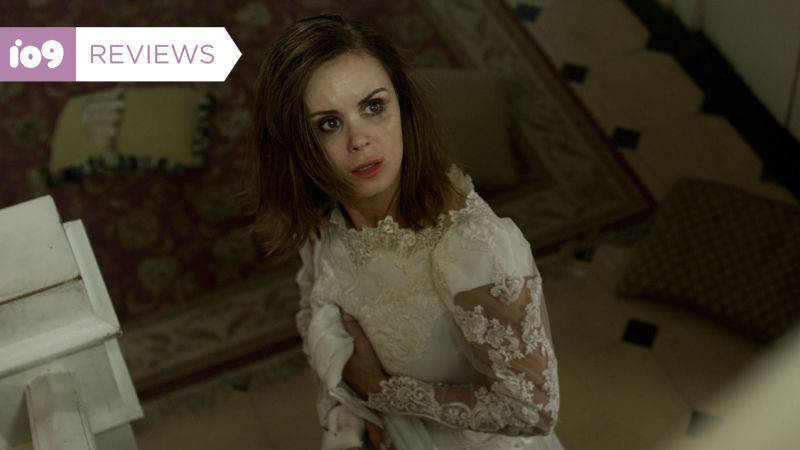 Kids dream up imaginary friends all the time. But when a kid who happens to be a character in a scary movie suddenly announces an invisible new playmate, it’s never something to be treated lightly—a lesson that the family in Z, Shudder’s latest original, learns the hard way.

At first glance, in Still/Born director Brandon Christensen’s latest domestic nightmare, the Parsons—dad Kevin (Grave Encounters’ Sean Rogerson), Beth (Bates Motel’s Keegan Connor Tracy), and eight-year-old Josh (Jett Klyne)—don’t appear to be a horror movie family. In fact, I would very much like to move into their house, which is huge, surrounded by trees, and oozes with moody, tasteful affluence. There’s even a fireplace in the bathroom, lending the de rigueur “spooky bath” scene (why do women in horror movies always take baths when things start to get tense?) an enviable air of luxury.

However, since this is a movie, not a Restoration Hardware catalog, ugly things begin to poke their way into this bubble of aesthetic perfection—and as we soon learn, things weren’t really all that perfect to begin with. Kevin’s preferred style of hands-off parenting is a convenient match for the fact that his job keeps him out of the house all day. Beth and her son, however, have plenty of together time—something that increases when Josh’s sudden onset of severe behavioral problems gets him kicked out of school.

Fortunately for anyone who couldn’t make it through act one of The Babadook, Josh’s style of insubordination is mostly somber and mercifully devoid of high-pitched shrieking. But the situation is no less distressing for his mother—Connor Tracy perfectly conveys an agonizing mix of guilt and outrage—since he won’t take any responsibility. Instead, he blames everything on the influence of his new invisible friend, who goes by “Z” and has commandeered all of the child’s playtime, while demanding (via Josh) crust-cut-off sandwiches and glasses of two-percent milk at mealtimes.

After the suspension and a grim accident (or was it?) involving one of social pariah Josh’s former real-world friends, Kevin and Beth finally consult a psychiatrist—though Z prefers to keep the focus turned inward, leaving the family to grapple with a problem that’s way worse than they initially realize. Beth, meanwhile, is dealing with her semi-estranged mother’s recent passing after a long illness; she has a certain amount of help from her younger sister, but (perhaps not surprisingly) zero support from Kevin. Cleaning out her childhood home jogs some memories she’d banished to the darkest corners of her brain.

The Z trailer actually gives away what counts for a twist in the movie, which is hardly a unique one (three words: Drop Dead Fred; Channel Zero fans, here’s two more for you: “Pretzel Jack”); the movie’s overarching themes about childhood trauma creeping in to disrupt a carefully arranged adult life are also not especially original. But the script—by director Christensen and Colin Minihan (Grave Encounters, It Stains the Sands Red)—makes an impact beyond that reveal, which is to say that even if the Z-Beth-Josh connection doesn’t shock you, there are certain other plot elements poised to unsettle the hell out of you.

Z is now streaming on Shudder.