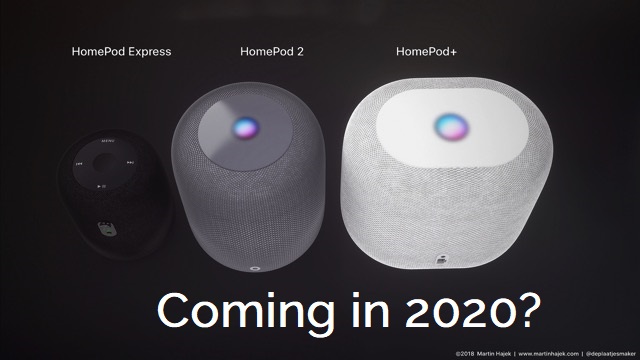 Rumors of the Apple HomePod 2 – or Apple HomePod Mini if you prefer – have been circling for a long time now, but evidence of the smaller Apple smart speaker has been building steadily since we first caught wind of it back in 2018.

The rumors originated in an Economic Daily report in July 2018 (via MacRumors) that claimed Apple may have been looking to release the HomePod 2 sometime in early 2019, which would’ve make sense based on the release date of the original HomePod – of course, it never actually materialized.

But with WWDC on the horizon, the HomePod 2 might be closer than ever. We’ve seen evidence that Apple is trying to get rid of its existing HomePod stock, with some fantastic HomePod deals available around the world as well as hefty staff discounts.

Is the world ready for the HomePod 2? We could find out soon.

Considering the Apple HomePod 2 hasn’t actually been announced yet, and there isn’t really any kind of historical pattern when it comes to previous releases for this this product, making a guess on a release date is tricky.

However, we think that a 2020 release date – perhaps as early as June 22 – is on the cards, especially as details of a HomePod 2 and new Apple TV have been revealed in a new report from Bloomberg. According to the report, Apple employees are going full steam ahead to get the company’s 2020 slate of products into the hands of consumers, despite the disruption to their usual working practices.

There are, of course, iPhones, iPads and MacBooks mentioned in the report. But we’re interested in the suggested debut of a HomePod 2 smart speaker and a new Apple TV set-top box.

Unfortunately, the report didn’t offer more details about whether both of those products will be launching soon or whether employees are just working on them currently. We’ll keep you updated, but the next likely release window could be WWDC on June 22, where we’re expecting to see the iOS 14 update in detail, along with upgrades in the form of iPadOS 14, macOS 10.16 and watchOS 7 – and possibly the Apple AirPods Studio, AirPods 3, and AirPods Pro Lite.

We’ve also seen evidence that Apple is trying to get rid of its existing HomePod stock, with some fantastic HomePod deals available around the world as well as hefty staff discounts, which further suggests that the tech giant is about to release a follow up to the smart speaker.

Back in March 2018, only a month after the HomePod’s release, there was a report from Economic Daily that Apple was planning to release a more affordable HomePod at some point in 2018.

Of course, it never materialized, but the HomePod 2 was said to be priced at around $200 (around £145 / AU$260), which is significantly lower than the device’s current $349 / £319 / AU$499 price point. In this report it wasn’t made clear how Apple was actually planning to lower the price of its speaker, but a brand new and smaller Apple HomePod Mini could be a way to do this.

Since then, we’ve heard further reports that support this price, which would go some way to combating criticisms of the speaker’s high price point.

There’s not exactly a glut of HomePod 2 or HomePod Mini rumors out there but there have been a couple of reports worth picking up on.

A patent filed by Apple suggests that the second generation smart speaker could support Face ID.

According to MacRumors, the patent describes a “countertop speaker” that could “identify users in the vicinity of the speaker using facial recognition, as well as measure the distance of users [in relation] to the speaker”.

The patent also explained the countertop speaker would be kitted out with “various sensors and cameras that gather hand gestures and other three-dimensional gesture input.”

Having Face ID built into the Apple HomePod 2 could provide an additional layer of security for users, as well as allowing for multiple user profiles, with each user identified via facial recognition.

However, MacRumors also identified a rather unusual potential feature of the Apple HomePod 2 in the patent – an “emoji-based avatar that would adapt to a user’s mood or actions,” perhaps even mirroring your emotions.

The HomePod 2 smart speaker could sound even better than the original, if new patents granted to the tech company are anything to go by.

Apple’s patent for a ‘Multi-listener stereo image array’ describes a system where “multiple people can experience a stereo audio effect, regardless of where they are seated,” according to Apple Insider.

One rumor around the new HomePod came from a Chinese tech firm called Sina, stating that there could be a cut-price HomePod with Beats branding in the works.

With the recent success of the Powerbeats Pro, this might be a chance for Apple to revive the name while repositioning the reportedly floundering HomePod to a brand new (perhaps younger) audience.

According to the report, the new HomePod would cost around $199 (about £150, AU$260), which is in line with previous rumors and would go some way to combating criticisms of the speaker’s high price point.  This is a report which should, however, be taken with a fistful of salt.

The first report of a Mini HomePod

Back in March 2018, only a month after the HomePod’s release, there was a report from Economic Daily that Apple was planning to release a more affordable HomePod at some point in 2018.

It was rumored that this cheaper HomePod would launch in the US in the second half of 2018 for around $200 (around £145, AU$260), which is significantly lower than the device’s current $349 / £319 / AU$499 price point. In this report it wasn’t made clear how Apple was actually planning to lower the price of its speaker, but a brand new and smaller Apple HomePod Mini could be a way to do this.

What we want to see from the HomePod 2

Sure, smart speakers are all about voice controls, and the fact that they’re standalone devices that don’t need to be hooked up to another audio source in order to playback tunes and podcasts. But, sometimes, a few added options are just convenient – especially if you’re trying to play back a track that, for whatever reason, can’t be found on the smart speaker’s streaming service of choice.

It may not be cutting edge in the smart speaker world, but there’s still the odd occasion when a Bluetooth speaker would be useful – and in the case of a HomePod 2 or HomePod Mini being tied to Apple Music, that’d be particularly useful for anyone looking to access, say, Spotify streaming. Which brings us onto our next point…

That’s fine if you’re an iPhone-owning Cupertino disciple, and Apple Music is a fine service definitely worth investing in. But, if you’ve already committed to Spotify or Google Play Music or any of the other myriad smaller streaming options, that could be a frustrating restriction.

By knocking a few bricks out of its walled garden and letting other services have a look in could give a new Apple HomePod a user base boost – and it could be paired with incentives to jump to Apple Music, if Apple played a savvy long-game.

The Apple HomePod is certainly an attractive speaker, with its fabric mesh covering and cylindrical size subtle enough to fit among many decors. But that’s not always what you’re looking for – sometimes you want a gadget that separates you from the pack, as evidenced by Apple’s Beats headphones.

That brand has been built around bold colorful designs, and if the rumors that the HomePod 2 or HomePod Mini is to feature Beats branding prove to be true, we’d like to see the speaker embrace Beats’ colorful aesthetic as well.

Apple’s HomePod does well on sound but when it comes to smarts it’s somewhat lacking. Compared to Google Assistant and Amazon’s Alexa, Siri is rather limited in what it can do for you as a smart home hub. This isn’t great considering it’s one of the most expensive smart speakers on the market, and Siri is your main means of controlling it.

With that in mind, we’d love to see better Siri performance in a new HomePod iteration when it comes to performing commands quickly and accurately. There are rumors that Siri will be cut from the device entirely to save on cost, but we’d rather see some improvements.