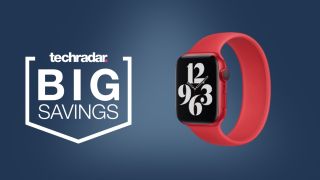 If you’re looking to save on the all-new Apple Watch 6, then you’re in luck. Right now, the Series 6 smartwatch is in stock and on sale for $339 (was $399) at Amazon. That’s a massive $60 discount and the best price we’ve found for the feature-rich smartwatch.

If you’re looking for Apple Watch deals on older models, Amazon also has the Series 3 on sale for just $169, and the Apple Watch SE marked down to $269.

Apple Watch Series 6 (40mm, GPS): $349.99 at Amazon
Save $60 – The all-new Apple Watch Series 6 gets a $60 price cut at Amazon. The 40mm smartwatch features a new S6 processor, blood oxygen monitoring (although most won’t use that), an ECG app, and elevation tracking. This deal applies to the Red sport band.
View Deal

The feature-rich Apple Watch 6 tracks activity, workouts, and calories and now includes a sleep app that helps you establish a regular bedtime routine to get a better night’s rest. The smartwatch also includes new health features such as blood oxygen monitoring and an ECG app that alerts you when an irregular heart rate is detected. The waterproof Apple watch also helps you stay connected with the ability to take calls and reply to texts directly from your wrist.

As we’ve mentioned above, this is the best deal we’ve found for the Apple Watch 6 and only $10 more than the record-low price. This offer applies to the Red sport band, but you can still find discounts on the Black, White, Navy, and Pink Apple Watch sport band.

Apple Watch Series 3, 38mm: $169 at Amazon
Save $30 – Available in a Black and White Sport Band, Amazon has the Apple Watch Series 3 on sale for $169. This is a great price on a super cheap Apple smartwatch that is still fully supported by the latest updates.
View Deal

Apple Watch SE (40mm, GPS): $269.98 at Amazon
Save $10 –  The budget Apple Watch gets a $10 price at Amazon. This deal applies to the White and Black Sport Band and – in our eyes – is the better choice than the Apple Watch 6 as it comes with Fitness Plus and sheds the unnecessary ECG and blood oxygen tracking.
View Deal

Not in the US? See the best Apple Watch 6 deals in your region below.

Shop more offers with our roundup of the best cheap Apple Watch prices and sales that are happening now.