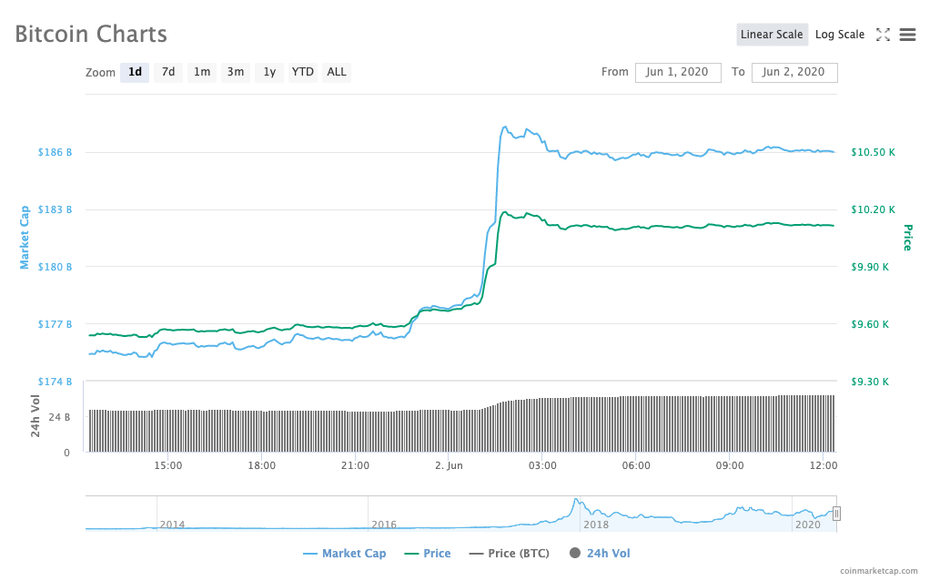 There’s a popular meme that shows Bitcoin on a perpetual rollercoaster. It’s true: The world’s largest cryptocurrency by market cap is a very volatile asset.

But it’s not often that Bitcoin goes up past the  $10,000 mark. On Monday, it happened again, and this time it may carry special significance.

The price swiftly rose from roughly $9,620 to $10,180 late on Monday according to CoinMarketCap, before settling down at about $10,100. Other cryptocurrencies, including Ethereum and XRP, are in the green as well, with the total value of all cryptocurrencies hovering around the $285 billion mark.

The ten-thousand-dollar mark is always a big psychological milestone. But it’s worth taking a look of how Bitcoin got there this time.

In mid-February 2020, Bitcoin was happily trading above $10,000 with a pretty strong bullish momentum, but then the spectre of the coronavirus pandemic took down the stock markets and cryptocurrencies alike, with the price of Bitcoin hitting a low of about $4,120 in mid-March (again, that’s according to CoinMarketCap; the price went significantly lower on some exchanges).

With the 10k milestone reached once again, however, Bitcoin has effectively nullified the effect of the pandemic, at least when it comes to price. And though it didn’t actually fulfill its promise of being a safe haven in times of crisis, as some predicted, it did recover faster than stocks.

Notably, Bitcoin is currently trading at roughly half of its all-time-high price of about $19,700, which it reached in December 2017. But the bullish momentum is clear once again.

It’s hard to predict what caused this latest, sudden price increase, with potential candidates including the recent Bitcoin halving event, U.S. protests against police brutality, trillions of dollars injected into the economy by the Fed, and reports of institutional buyers piling up Bitcoin.

All of the above can be interpreted as positive news for the price of Bitcoin, which has a predictable inflation rate with fixed supply, and is outside of any one government’s control. Some notable proponents, including investor Mike Novogratz and Gemini co-founder Cameron Winklevoss, have recently expressed optimism about Bitcoin’s price in light of these circumstances. As always, however, there’s no guarantee that the price will continue its current trajectory.

Disclosure: The author of this text owns, or has recently owned, a number of cryptocurrencies, including BTC and ETH.