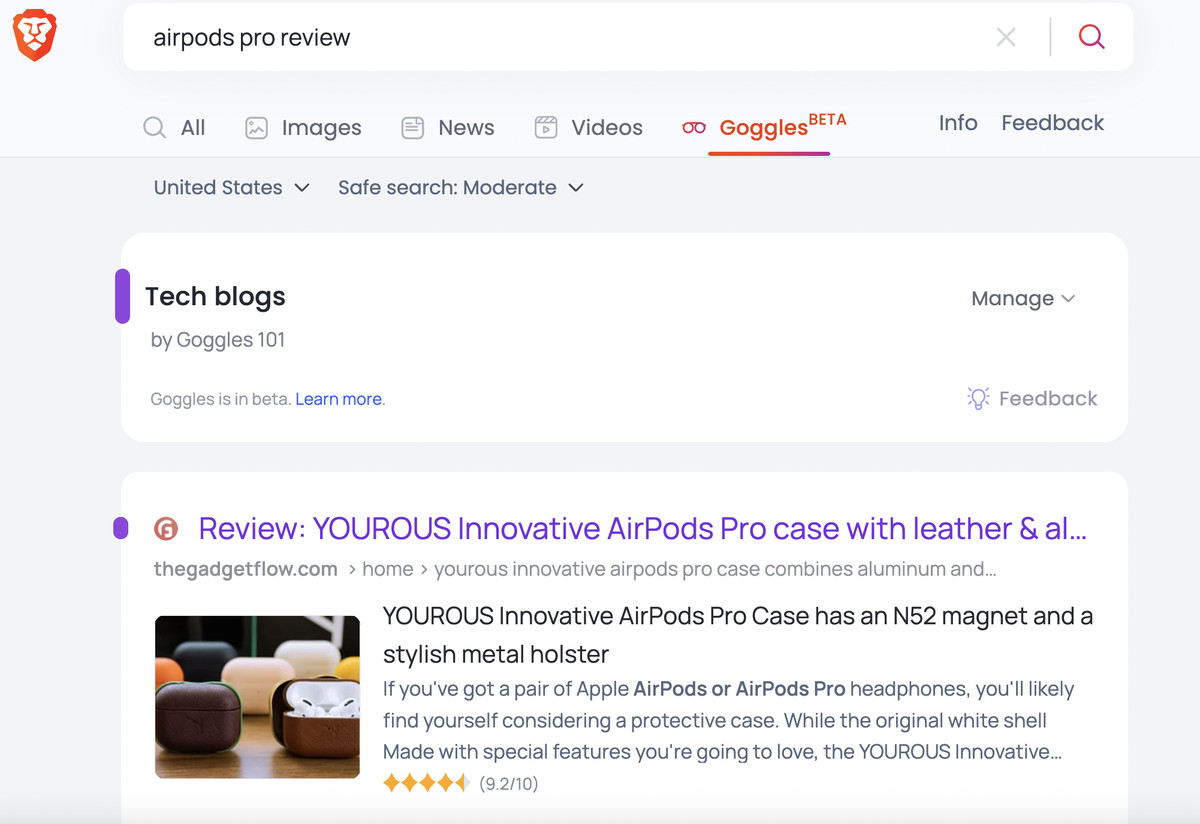 Brave Search has launched a new feature that gives you a way to create or apply custom filters that change the way its results are ranked. It’s called “Goggles,” and it could potentially help uncover sources you might not find right away on traditional search engines like Google.

Brave has some demos ready for users to try today, including ones that prioritize posts from smaller tech blogs and filter out posts from the 1,000 most-viewed sites on the web. There’s even a Goggle to exclude posts from Pinterest — because Brave clearly knows the frustration of trying to find an image and getting a Pinterest post with no source. Brave says these Goggles are just for demonstrative purposes, and developers can expand on or fork them. It will start deleting these Goggles once users start coming up with their own, but I’m hoping the Pinterest one sticks around.

While Brave says its engine, which is independent from entities like Google and Bing, “doesn’t have editorial biases,” that doesn’t change the fact that there are biases inherently present in all algorithms. Goggles are meant to mitigate this, essentially letting you have a hand in shaping what those biases are.

After trying the feature out for myself, I was impressed with how well it actually works. I searched for “AirPods Pro review” with the “Tech blogs” filter turned on, and a bunch of independent blogs popped up — The Verge was nowhere to be found. To compare, I searched the same thing on Google and saw that The Verge appeared on the first page of results.

But I was a little disappointed to find that creating your own Goggles isn’t as easy as I thought — here I was thinking that you could toggle on a bunch of filters or just enter your own keywords. Well, it turns out there’s some coding involved; developers can read up on the tool on GitHub. For now, I’ll just wait until someone comes up with a Goggle that lets me view only articles from satirical sources.

In addition to launching Goggles, Brave also announced that its search engine is out of beta and that it has already seen 2.5 billion searches within the past year. Brave is quickly becoming the Swiss army knife of search engines (at least in my opinion). It rolled out a new Discussions feature in April that started eliminating the need for users to append “Reddit” to the end of their searches — it now displays results from Reddit for relevant inquiries.