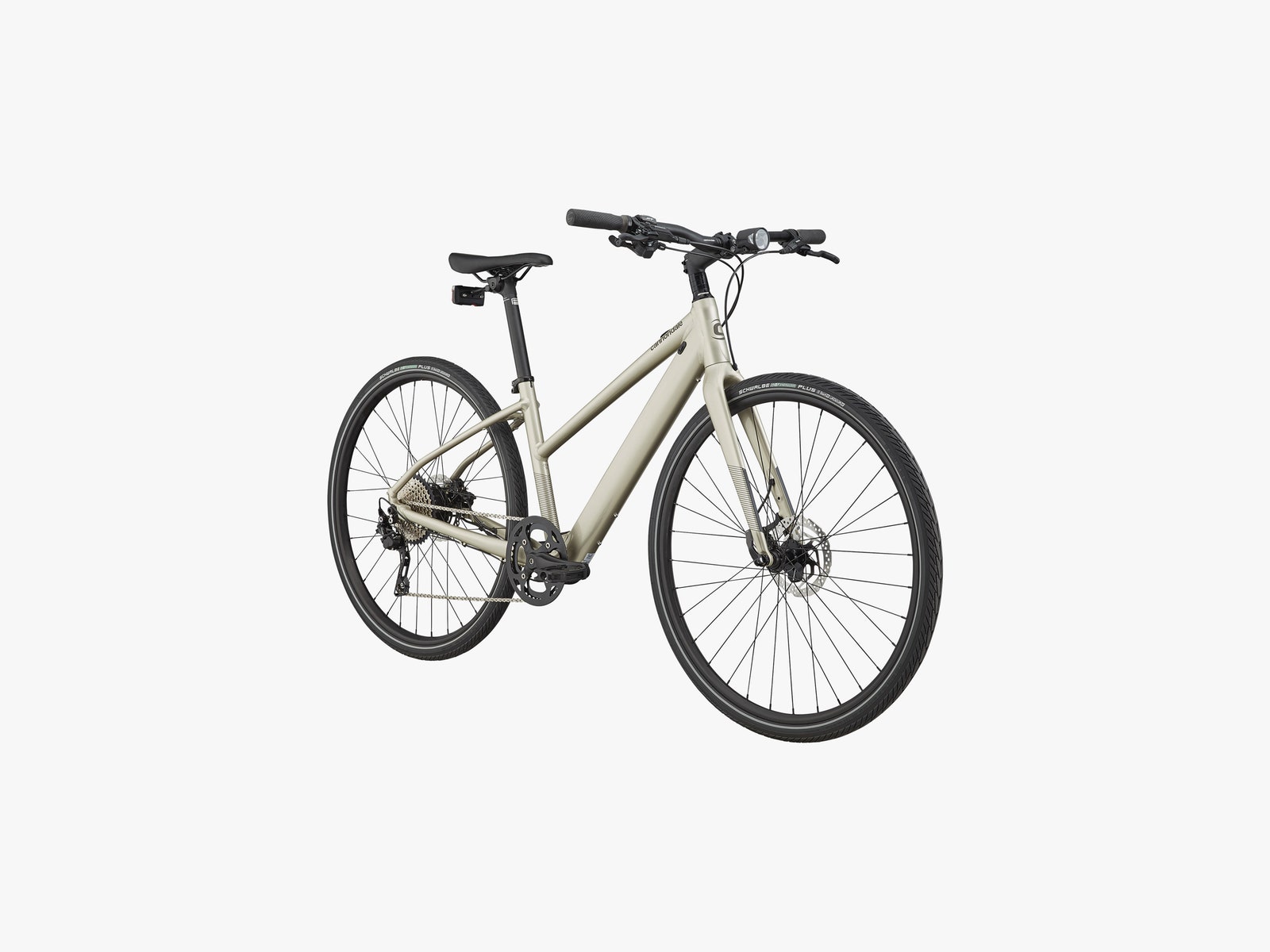 Now seems like a good time to confess: I don’t wear a mask while running or biking. My neighborhood streets and parks are sparsely populated. It’s easy for me to give people a berth of far more than 10 feet when I do see them.

Not wearing a mask does have consequences, though. If another person does spring up at me, I panic. If you approach me as I’m running or biking, I will turn perpendicular to the trail and leap directly into some shrubbery, like a Monty Python character or hapless rom-com heroine.

If this is also your social distancing strategy, you might be looking for an electric bike that can transition easily from long-distance commuting to fun weekend rides that may or may not involve some unexpected jouncing. I recommend the Specialized Turbo Vado SL, but if that’s a little expensive and you don’t need quite as much power, the Cannondale Quick Neo SL 1 is also a fun, speedy, and sometimes confusing ride.

I’ll Take You There

If a hybrid bike is a combination of a mountain bike and a road bike, then this Cannondale ebike falls somewhere on the spectrum between a hybrid fitness bike and a casual cruiser like the Electra Townie Path Go.

Like a casual cruiser, the Quick Neo SL 1 Remixte I tested has a step-through frame to make it easier for newbies, especially short ones, to hop on. There is a larger SL 1 and SL 2 model that have step-over frames. The SL 1 also has a few upgrades over the SL 2 that result in a slightly bigger price tag, like one more gear and a front light.

But the Quick Neo’s resemblance to a cruiser is mostly superficial. The battery is integrated into the lightweight aluminum frame. It looks pretty much like a regular bike, weighing in at a petite 34 pounds. It has a shock-absorbing carbon-fiber fork, straight mountain-bike-style handlebars, and sturdy Schwalbe tires. River City Bicycles lent me a small tester, which fit my 5’2″ frame perfectly. It looks and feels mostly like a sporty fitness bike.

I don’t commute to work (now or ever) unfortunately, but I did ride it around town on errands and through dirt and gravel trails in parks near my house. The Quick Neo is a class 1 ebike, which means that it provides electric assistance up to 20 miles per hour. I cranked up the Shimano nine-speed gearing system and got it easily and happily up to 20 mph on a flat, clear road by my house, according to my Apple Watch.

The Quick Neo has a Mahle Ebikemotion drive system, with a rear hub motor that powers the bike by turning the rear hub (the hub is the center of your back tire’s spokes). Many electric bike enthusiasts prefer one type of drive system over the other. The general rule of thumb is that a hub system is more reliable and affordable, while a mid-drive system—one that powers the chain—feels much more natural but is sometimes more expensive and requires more maintenance.

If all you’re doing is neighborhood commuting on roads, this bike and its rear hub system is fine! However, if you’re planning on using the Quick Neo to go on the occasional trail ride, it’s worth noting that it may feel unbalanced when climbing off-road hills. It also doesn’t have a throttle, so you can’t cheat and pump up your speed when you feel your front wheel start to wobble on gravel.

When we reviewed the Cannondale Treadwell last year, we made special note of Cannondale’s proprietary sensor, which sits on the front wheel and can inconspicuously and easily log all your fitness data. The bike also comes with a proprietary mount, if you buy the correct SP Connect-compatible case for your phone.

Unfortunately, Cannondale’s handlebars decrease in girth as they move out to the grips, so I can’t use my regular clamp mount. This might be annoying if you, like me, happen to really like your minimalist phone case and would like to keep using that instead of buying a special one just to ride your bike.

The bike also has two different apps, with two different ways to look at and track your data: There’s Cannondale’s app, which syncs with Garmin’s free Connect app (which went down while I had the bike) and Ebikemotion’s app, which is more attractive, easier to use, and shows you the bike’s battery level.

It was frustrating to have to swap between apps that I couldn’t even look at while I was riding. It didn’t seem necessary for just tracking your stats, especially if you’re also wearing a fitness tracker or smartwatch that will show you stats like your speed and distance traveled anyway. Having a single app would be far better than this.

Rather than looking at the app, you can also just push the button on the down tube, which will blink to tell you a number of things. Once you turn it on, a non-blinking light ring indicates your battery level (white, green, orange, or red). If you push it again in half-second increments, that changes your assist level.

The bike has three separate levels of assistance that you can trigger by pushing the button to switch from blinking green to blinking orange to blinking red. You’re going to need to do some multicolor blinking light memorization, though.

I ended up getting confused. Blinking red also means that your battery is low? What’s the difference between blinking and rapid blinking? I spent a lot of time pushing this button randomly. One sad, hot day at the base of a big hill in my neighborhood (I have christened this hill the Battery Killer), I stood and repeatedly pushed the button to trigger more assistance, before I finally pulled out my phone and checked the Ebikemotion app. It told me the battery was dead. Luckily, it’s light enough to pedal home without assistance, but I did grumble on the way back.

I prefer electric bikes that look like regular bikes. I use mine mainly for cycling around my neighborhood, and I get less anxious if an ebike looks like a normal bike when I lock it up in front of the grocery store.

For me, riding a bike inescapably reminds me of my teenage years, messing around on trails and streets in my suburban neighborhood with a gang of friends. I will always associate riding a bike with freedom, and that’s what the Quick Neo feels like.

Even Covid-19 can’t ruin my day. When I’m flying down a gravel hill on the Quick Neo and see a group of unmasked people coming up fast, then immediately jerk the handlebars to the right and scud off through patchy knee-high grass, I feel like I’m 14 years old again, disobeying curfew and dodging potato gun shots in my friend’s backyard. It’s fun.

Cannondale should make this bike’s electric operation a little less proprietary and confusing—a small LED display or clearly labeled assist buttons on the handlebars never hurt anyone!—but overall, the Quick Neo is still a gorgeous, fun ride for a cyclist who wants an accessible, one-bike e-quiver.