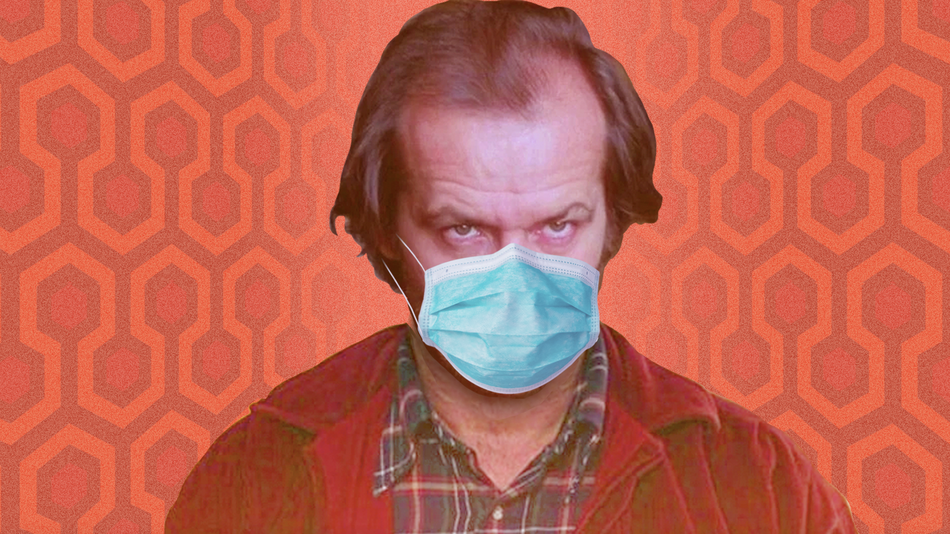 Come play with us — from a safe, six-feet distance with precautionary face coverings, please.

On May 23, 1980, Stanley Kubrick’s The Shining hit theaters for the first time. 40 years later, it’s renowned as one of the most chilling chapters in horror history, a masterful blend of supernatural and psychological terror so timeless even the Overlook Hotel’s carpeting is iconic.

Of course, on this particular anniversary, the story of a struggling writer and his family self-isolating for a winter of productivity only to slowly descend into a murderous nightmare feels especially haunting. Amid the COVID-19 pandemic, people everywhere have been forced to cope with the mental and physical consequences of solitude.

That means special screenings, costume parties, visits to your local hedge maze, and whatever other spooky plans you may have had to celebrate The Shining’s big Four Zero have likely been canceled. But if Jack, Wendy, and Danny Torrance taught us anything, it’s that families can get past any obstacle if they just work together!

So, as an act of goodwill on this most hallowed of holidays, we’ve come up with five safe ways for horror fans to celebrate The Shining from home. Because 237 was way too many.

5. Have yourself a glass of scotch (or a bowl of ice cream)

With nowhere to be and no one to see, there’s never been a better time to do and eat whatever the hell you want. Sure, most folks don’t have access to an industrial kitchen like Dick Halloran’s or a tricked-out ghost bar like Lloyd’s — but that doesn’t mean you can’t conjure up a Stephen King-inspired treat for your at-home celebration. Use those twenties and tens burning a hole in your pocket to get delivery. You too can ask for bourbon and then inexplicably drink Jack Daniels.

Note: If you have a homicidal novelist locked in your walk-in pantry, be careful to not let him out.

Unfortunately, now isn’t the best time to telepathically request a stranger fly from Miami to Denver, drive up a mountain through a blizzard, and get murdered by your dad in a hotel lobby. (You know, social distancing and all.) But you can and should contact a friend the normal way!

Whether you’re co-watching The Shining, Doctor Sleep, Room 237, or some other tribute to Kubrick’s legacy, Overlook fans have plenty of material to bond over. Everyone’s feeling a little lonely right now so let loose and engage in a multi-hour deep-dive on themes, symbolism, endings, and whether or not this movie had anything to do with the moon landing. (It did not.)

With the monotonous sameness of your daily ritual slowly driving you up the four walls, a new hobby could be just the thing to shake off your funk. Hop on your tricycle, fling a tennis ball at the wall, mess with the hotel radio, talk to the little boy that lives inside your mouth, have unusual but consensual oral sex with a bear — whatever makes you feel good.

In this reporter’s case, that’s meant meticulously recreating The Overlook in Animal Crossing and getting really frustrated that my house doesn’t have elevators that can be filled with blood. Oh well!

2. Reevaluate the concept of time

Upon rewatching The Shining, those days of the week title cards can seem a bit hokey. But considering any mention of time does feel like a startling, full-screen experience these days, maybe they’re just the thing for you!

Pull out your calendar, grab a calculator and a pen, then get to reconsidering space and time. If Jack Torrance was supposed to be in isolation for five months and you’ve been in isolation for two months, how much money does Stuart Ullman owe you? And how long has Delbert Grady been dead? And when does Avatar 2 come out? You know, the big questions!

1. Cut yourself some slack

Look, we’re all having a really hard time right now. The best thing you can do to honor The Shining and yourself on this 40th anniversary is take it nice and easy. Whether you’re rewriting the same e-mail, “all work and no play” style, or finding a body in the bathtub you do not recognize, have faith that the snowcat will be working soon and you’ll be headed for the sheriff’s station.

Until then, kick back, relax, and read words backwards. That always gets things moving.

The Shining is available on Prime Video, YouTube, Google Play, iTunes, and more.