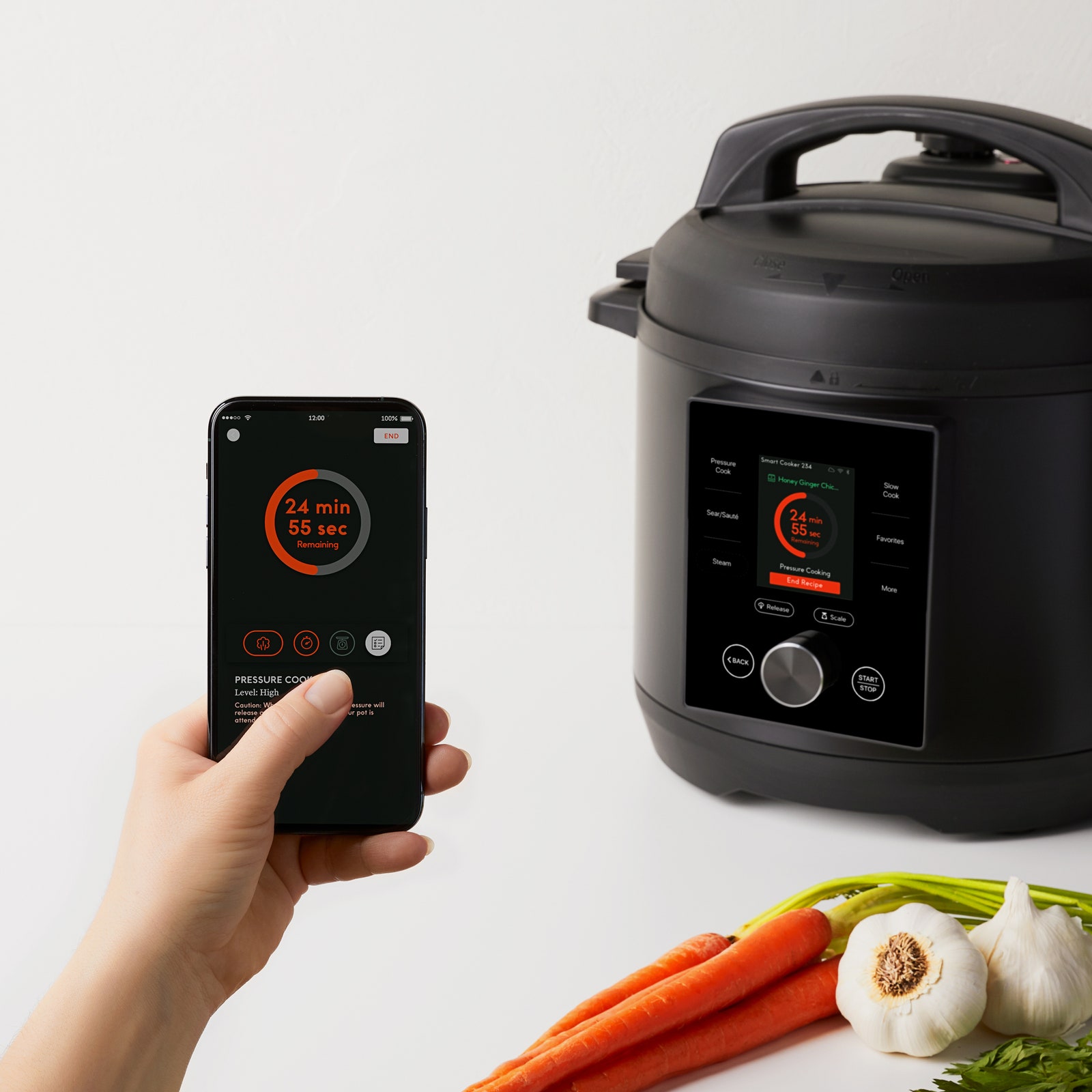 When a new appliance comes into my test kitchen with the word “smart” in its name, I tend to keep it at arm’s length, as manufacturers often do a surprising job of forgetting who might cook with it. A new device, however, dangled a specific form of culinary catnip in front of my nose, and I was unable to resist.

That catnip is cooking by weight. Instead of creating a pile of dirty measuring cups and spoons as you cook, you put your mixing bowl on a scale, then weigh each of the ingredients as you pour them in one by one. Combined with good prep, it allows you to blaze through a meal and keep mess to a minimum.

“Whoa, what’s up with Darth Pot,” my wife, Elisabeth, asked when she came into the kitchen. On the counter was the Chef iQ Smart Cooker, a matte-black, six-quart electric pressure cooker (aka multicooker, a class of devices that includes the Instant Pot) that looks like it could be Lord Vader’s robot pet. The brand’s use of “smart” is justified, particularly when considering how the device, with its companion smartphone app, guide you through the cooking process. By pairing a phone with the Chef iQ, users can choose recipes where each step is demonstrated with a little video, and the corresponding temperature or pressure gets automatically teed up on the pressure cooker.

Good guided cooking is a heavy lift that involves three key elements: a product that works when it’s not connected, recipes created just for that appliance by chefs with good palates, and a tech team that can create an app that streamlines the cooking process. A dropped ball on any of these causes things to go poof in a hurry. (For great examples of guided cooking look at the Thermomix or Hestan Cue.)

In my initial testing, I found that the Chef iQ capably ticked many of those boxes. I started by making spaghetti sauces: a marinara and a bolognese. I was worried I’d encounter bland food, as can be the case with smart appliance recipes, but no. The marinara called for a generous amount of garlic. The bolognese was deep and complex, and the process for both was significantly sped up by cooking under pressure.

I also used the Chef iQ to make a steak with herb butter. It’s not a pressure-cooker recipe, but it gave me a good way to test the pot’s facility at browning meat, a notorious pressure-cooker weakness. By calling for a one-pound strip steak, which tend to be uniform in size, the recipe authors know that six minutes on each side at a predetermined temperature will make for a nice medium-rare steak with solid browning. The guided-cooking steps include a countdown to keep you from doing things like flipping too early. While it cooked away during longer steps, I found that I was prone to use the time to clean up, saving time after dinner.

Things were off to a good start. I liked the way the app worked, starting with a little no-nonsense video that lets you know what you’re in for—the equivalent of reading the recipe through in a cookbook before you start cooking. It then gives each step its own video, which can cover simple things like how to dice an onion, or how to extract a whole cooked chicken from the pot with a pair of tongs.

The product, the recipes, and the app all felt uniformly solid, but what I wasn’t finding—and this was odd—was the cook-by-weight feature being used in the app’s recipes. The pot itself works as a scale, and by clicking around in the app while you’re in the middle of a recipe, you can take advantage of that by seeing the weights of the things you’re adding. But for the time being, all that extra tapping is a momentum killer. On the aforementioned Thermomix, you can call up a smoothie recipe on the device itself and just stand there, pouring in one ingredient after another, straight from the bag or container, and tapping Next after each item is weighed. The lid goes on, you get the blades spinning, and you’re sitting down to a protein-shake breakfast. I hope the Chef iQ team aspires to this, because it’s where the magic is. Like adding smartphone functionality with a new operating system, all the company needs to do is update the app and firmware.

However! You can find some of that functionality hidden in a section of the app that’s inexplicably called the “calculator.” For now, it’s also available (and better) on the machine itself.

First, let’s back up a step. The control screen on the cooker offers an impressive array of presets: You can do things like sear chicken thighs or pressure-cook eggs to soft-boiled consistency. My favorite thing to cook, though, is beans. Finding a good reference chart on how to cook different kinds of beans in a pressure cooker is surprisingly difficult. I use one from a stovetop pressure cooker cookbook, along with the one in the back of Urvashi Pitre’s Indian Instant Pot, so I was happy to see options—black beans, chickpeas, and a few others—on the pot, and several more when I opened the app. For grains, the app has 15 options, from amaranth to wheat berries. On the pot itself, you can pour in half a bag of those black beans, which, by weight, tell it how much water you’ll need. You can then weigh the water as you pour it in, then close the lid and hit Start. The Chef iQ sets the time, pressure, and even type of pressure release.

See how nice that is?

For now, through, this side of things is a work in progress. You can weigh the beans and the water, for example, if you use only the pot itself and read the display as you go, but you can only weigh the beans (and not the water) if you work from the app, something a company representative says is being addressed. Unfortunately, the cooking time for chickpeas is way too long—30 minutes via the app for soaked beans, or an hour and a half for unsoaked. Both of my references recommend three minutes on low pressure for soaked beans. That said, I really liked how I could create custom favorites and save those settings to the machine itself. If I owned a Chef iQ, I’d sit around one night with one of my reference books, plug in the cooking times for every legume I’d likely ever cook, and be forever happy with my custom presets.

To wrap it up, I went back to the guided cooking, making a few more Chef iQ recipes: biscuits and gravy for weekend breakfast, pulled pork for taco night, a whole chicken and gravy, and even spaghetti carbonara. Whole chicken isn’t really ideal in any pressure cooker (no crispy skin!) and the carbonara felt a bit like stunt cookery, as all the water you cook it in combines with the cheese to become the sauce, but everything tasted good and could be made in an hour or less.

There’s a lot of promise here. The appliance is solid, and the recipes in the app are basic but tasty. The tech behind the Chef iQ has the feeling of an early release. If I’m not mistaken, the first time I looked at the About section of the app it said “Version 1.0.x.” I’ve since been upgraded to 1.0.4, but the basics are there, and it’s not buggy. The recipes—the team is adding about five per week—are the kind of solid go-tos that you want to use to learn your way around a new machine. (Some manufacturers make the mistake of skipping the fundamentals and trying to wow you with fancy stuff you may never make.)

A couple of key steps might help tip the scales in the Chef iQ’s favor, such as truly integrating cooking by weight into its guided cooking recipes and expanding its recipe collection. There’s been talk of this machine being given the ability to adapt recipes found on the internet, but that’s the Wild West; The company could also significantly deepen its bench by licensing content from authors of trusted pressure-cooker cookbooks, like those from America’s Test Kitchen, Melissa Clark, or Urvashi Pitre. Using recipes like theirs for guided cooking would be an incredible offering.

Whenever a new pressure cooker comes out, there’s speculation about whether it has the potential to unseat Instant Pot, the undisputed king of the pressure-cooking ring. The Chef iQ isn’t there yet, but if the company continues updating its app and firmware in these promising directions, it certainly could claim the throne.