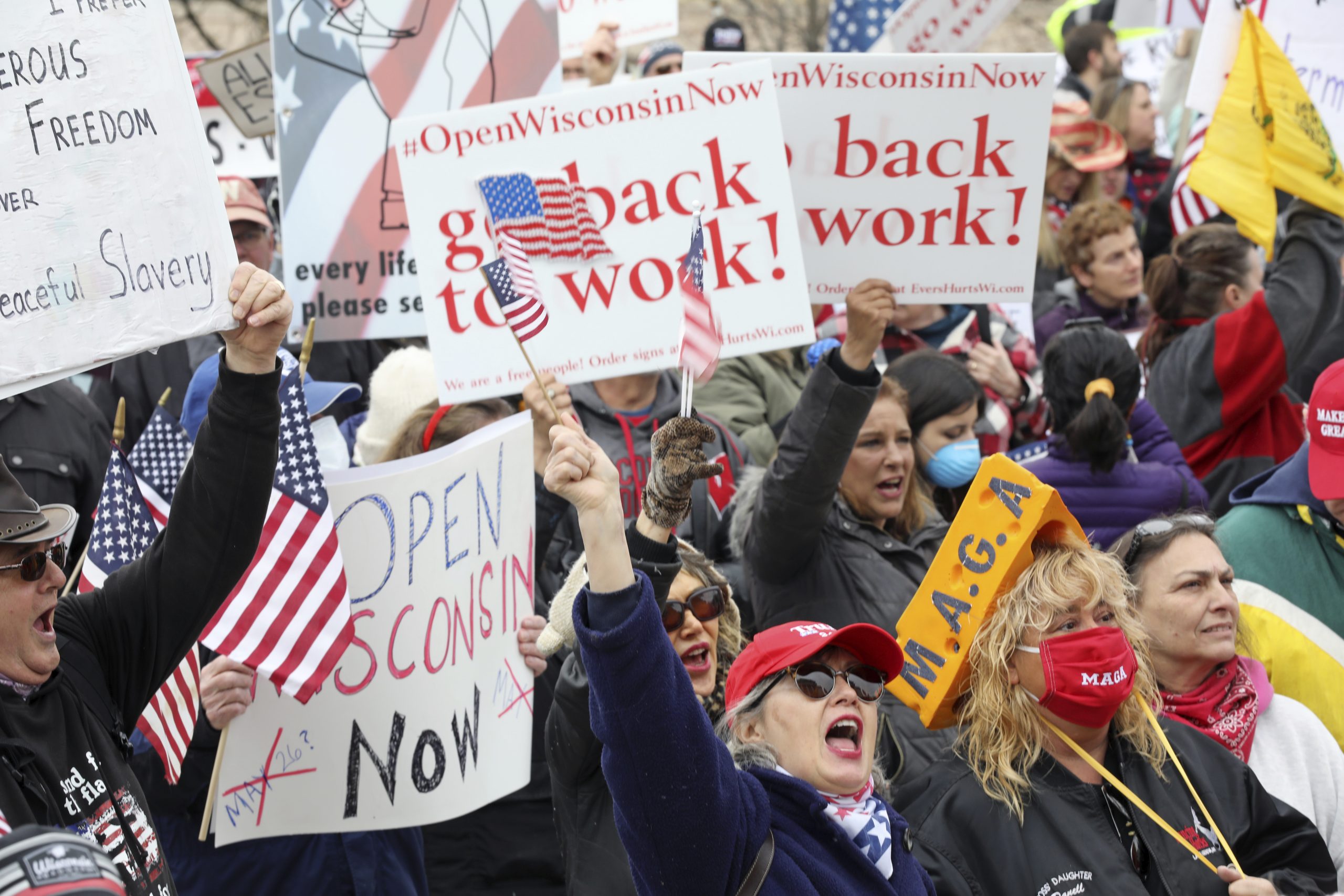 In a jaw-dropping move on Wednesday, the conservative-dominated Wisconsin Supreme Court threw out the entirety of the emergency shutdown order Democratic Governor Tony Evers’ administration ordered to contain the novel coronavirus pandemic.

Evers’ order imposed restrictions on operations of non-essential businesses, imposed social distancing requirements on those that remained open, as well as asked Wisconsinites to stay at home as much as possible to prevent the spread of the virus. The Republican-controlled state legislature filed suit against the state Department of Health Services Secretary-designee Andrea Palm, as well as other health officials, when Evers’ administration extended it from its original date of April 24 to May 26. They claimed Evers had overstepped his powers and threatened to leave Wisconsin “in shambles.”

Republicans’ victory in the suit throws out virtually the entirety of the state’s playbook for containing the spread of the virus; according to the Milwaukee Journal Sentinel, restaurants, bars, and even massive concert halls will be able to resume normal business, unless local officials intervene with their own restrictions. Milwaukee Mayor Tom Barrett has reiterated that the city’s own order remains in effect, including “all provisions on public gatherings, restaurants, and bar operations.”

Of the nearly 1.4 million confirmed cases and over 84,000 confirmed deaths throughout the U.S. listed on the Johns Hopkins School of Medicine tracker, a relatively small portion are in Wisconsin: around 10,900 cases and 420 deaths. However, former Food and Drug Administration commissioner Dr. Scott Gottlieb has warned that in some of the dozens of states loosening restrictions despite not meeting federal guidelines to do so, coronavirus cases are again on the uptick. Limited reopenings of bars and nightclubs in South Korean capital Seoul resulted in a spike of new infections, a pattern that has been mirrored in other nations.

The court found that Palm should have issued the order through a painstaking rulemaking process—which would have given the legislature an opening to veto it. Justices wrote in the majority opinion that it did not believe an “unelected official could create law applicable to all people during the course of COVID-19 and subject people to imprisonment when they disobeyed her order.”

Justice Rebecca Dallet wrote in the dissenting opinion that “This decision will undoubtedly go down as one of the most blatant examples of judicial activism in this court’s history. And it will be Wisconsinites who pay the price.” ACLU of Wisconsin executive director Chris Ott issued a statement to the Journal Sentinel stating that the order had “been instrumental in allowing Wisconsinites to stay home from work and protect themselves from infection… We urge employers not to force people back to work before it is safe to do so or before childcare is available.”

The 4-3 decision, with four conservative justices joining the majority opinion and another joining with the court’s two liberals in a dissent, is effective immediately. According to the Journal Sentinel, it has also outpaced any effort between the legislature and Evers to reach an agreement on what other steps the state might take to stall the virus’s spread.

Legislative Republicans had asked the court to allow the order to stand for another week, the Journal Sentinel reported, to no avail. There does not appear to be any backup plan. GOP leadership in both the State Assembly and Senate did not propose one, the paper wrote, though GOP State Senator Dan Freyen did release a statement proposing that “good old-fashioned common sense and personal responsibility” could somehow fill the gap until a solution emerges.

Republicans in the state legislature won another lawsuit last month, defeating Evers’ order to delay Wisconsin state elections during the pandemic—conveniently at the same time as the U.S. Supreme Court shot down extended absentee ballots in the state. This is part of a pattern; the state GOP moved to systematically strip Evers of many gubernatorial powers after his election in 2018 in a power grab that could easily be reversed if the governorship reverts to Republican control.

The ruling is likely to breathe more life into a determined, mainly right-wing movement to “re-open America” without respect to the advice of public health experts wary of potential catastrophe.

Polling last month showed that most Americans are more concerned about the risks of opening too quickly, though more recent ones show that public wariness of the pandemic may be weakening. That trend is especially strong among conservatives who blame business restrictions for the national economy plummeting into freefall and support Donald Trump’s calls to return to normal as soon as possible. Among them are groups of heavily armed activists and conspiracy theorists with ties to the gun lobby and the far right that have staged demonstrations in numerous states, often with no regard for social distancing guidelines supported by health authorities.

In Wisconsin, thousands showed up to protest the restrictions in April, while in neighboring Michigan, armed protesters have entered the state capitol and defied the state’s own emergency rules. The Metro Times reported that at least four Facebook groups with a total of 400,000 members opposing Michigan’s order are full of “paranoid, sexist, and grammar-challenged rants,” including numerous threats against Michigan Governor Gretchen Witmer. In Texas, there has been a spate of incidents where armed men carrying long guns have shown up to businesses reopening in violation of the state’s closure order in a naked challenge to law enforcement.

“We’re definitely concerned,” Evers spokeswoman Melissa Bauldauff told the New York Times. She added that as far as an appeal goes, “We’re at a loss. Our understanding is that this is the end of the road.”

As a business owner, you understand the importance of having a strong online presence. Done. Over the next five years, nissan motor company will put 2 trillion yen ($17.