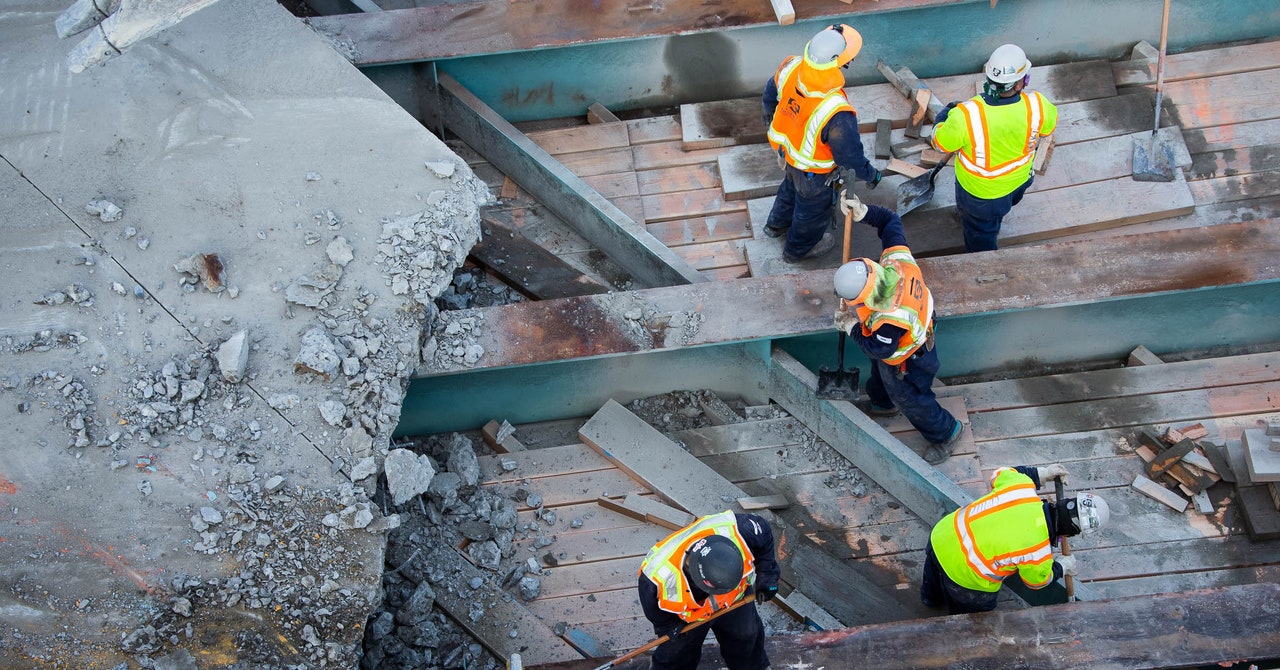 Until a few weeks ago, the California Department of Transportation was girding itself for a summer disaster. Come July, it was planning to shut down a congested stretch of Highway 101 between San Francisco and Silicon Valley for nearly three weeks to tear out and rebuild an aging, cracking bridge deck that carries the freeway over San Francisco’s Alemany Circle. It anticipated 6-mile-long backups and hour-long delays—and that’s if it could persuade one-third of drivers to skip the trip or at least avoid rush hour. Then, in early March, Covid-19 hit the United States. California issued a shelter-in-place order. And while most residents stayed home, the state’s Department of Transportation went to work.

With traffic cut in half, the DOT, better known as Caltrans, saw a rare opportunity to tackle the project without devastating the commutes of hundreds of thousands of travelers. Last week, about 100 construction workers got to sawing apart the bridge deck, hauling away the debris, and building a fresh one in its place. Within a week, the crew had laid fresh concrete. It’s now on track to finish the project in nine days, half as long as projected and three months early. Caltrans spent more than planned to acquire materials like timber on short notice, but spokesperson Bart Ney says those costs are far outweighed by avoiding a massive, expensive inconvenience for drivers.

By forcing most Americans to stick to their sofas, the novel coronavirus makes it easier to close lanes without creating congestion, creates safer conditions for road workers, and allows for jackhammering and paving day and night. Along with the bridge deck project, Caltrans is accelerating projects repaving stretches of Highway 1 in San Francisco and Highway 101 in Sonoma County, building a series of roundabouts in the city of Napa, and getting ahead of sundry maintenance projects.

Across the country, DOTs are reaping the benefits of fixing road networks without worrying about road users. Reno, Nevada, is speeding an extension of its bus rapid transit network, which involves closing a chunk of its Virginia Street thoroughfare, saving six weeks of work and up to 35 percent of costs. In Wisconsin and Arizona, crews are taking the opportunity to work during the day as well as at night. Road projects in Texas, Colorado, and Virginia are suddenly ahead of schedule. At the order of Governor Ron DeSantis, the Florida DOT is expediting work on Interstate 4 in Orlando, closing more lanes and working longer hours to finish a connection to State Route 408 up to two months early. In Hawaii, construction consultant Scott Jennings says he’s getting no regulatory pushback on requests to extend work windows from 3:30 pm to 5:30 pm—right into rush hour. “I’m as busy now, or busier now than I’ve been in the last three, four years,” he says.

Like most booms, this surge in roadwork will come with a bust. Drivers may inconvenience those fixing up roads, but they also pay for that work. The traffic lull could cause states’ fuel tax revenues to fall 30 to 40 percent over the next 18 months, according to the American Association of State Highway Transportation Officials. Plummeting car sales mean states collect greatly reduced registration and title fees. “This is money they count on to fund the transportation projects they sponsor,” the association’s executive director, Jim Tymon, said in a webinar this week.