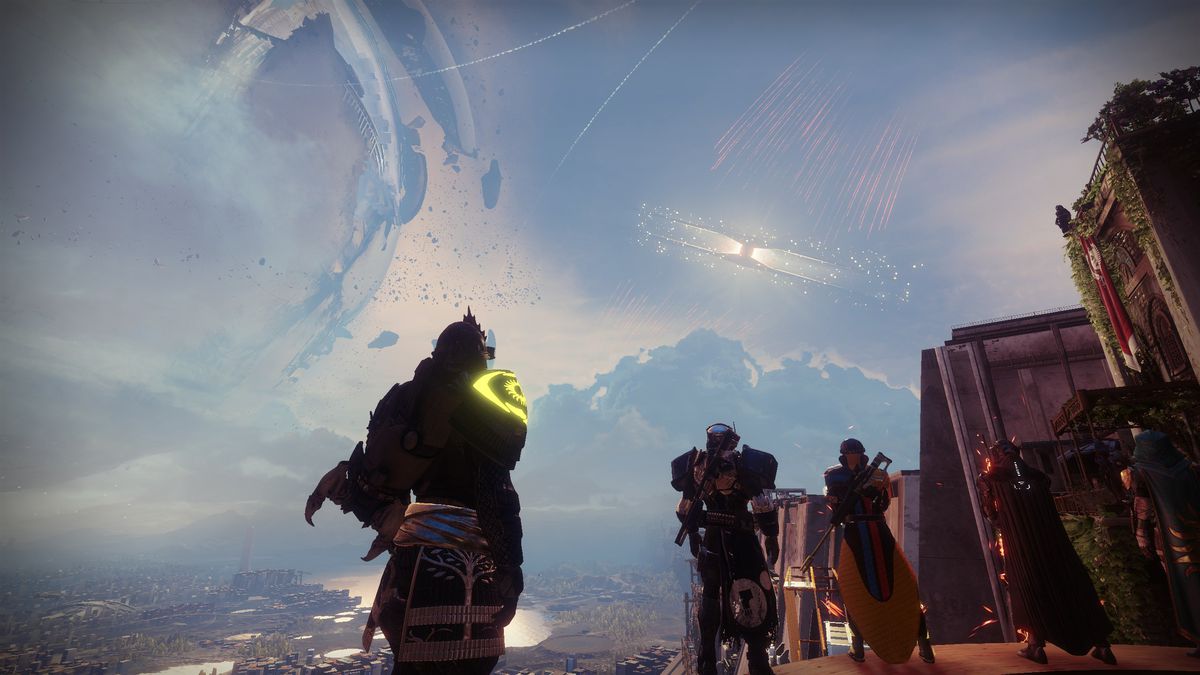 Destiny 2’s first ever Fortnite-style live event just wrapped earlier today, and it was unfortunately not quite what some players were expecting. Instead of something monumental and game-changing for a key part of the game world, it was more of a slow burn alternative to a standard video game cutscene. And instead of delivering a strong narrative pay off on a season’s worth of otherwise dull and repetitive activity, the Almighty event ended without any meaningful change in direction or surprising new development.

For the last there months, developer Bungie has been building up a clash between the Destiny world’s artificial intelligence supercomputer Rasputin and a large planet-destroying ship called the Almighty. All of this past season’s activities have revolved around communicating with the AI character, a largely mysterious fixture in Destiny lore before this season, and doing a series of rehashed game modes and resource collecting in service of an eventual showdown between Rasputin and the Almighty. Over the last month, players were asked to participate in a mind-numbing number of public event activities to unlock an old Destiny 1 weapon and a brief story mission, with the promise of more to come at season’s end.

Some players expected the Almighty to actually crash into the game’s Tower social hub. Others expected a cutscene or perhaps some form of real-time space battle that would destroy or in some substantial way change the Tower. What we actually got was a severely understated form of the latter in which the image of the Almighty changed in excruciatingly slow fashion with new animations and, eventually, a brief scene of its destruction and crash landing. Yet the whole execution felt a bit slapdash and underwhelming.

The event got off to a bumpy start when, at the scheduled 1PM ET start time, nothing appeared to happen. The delay, whether intentional or not, lasted for more than 20 minutes, but it did give players ample time to load into the Tower and to join in with any other collaborative antics other players were engaging in.

In my instance, a row of well-decorated Guardians laid down holographic staffs as if to make a last line of defense by using the “None Shall Pass” emote, a reference to Gandalf’s legendary line when facing down the Balrog in The Lord of the Rings.

Eventually, players began noticing subtle changes in the sky in the form of large clusters of laser beams arcing toward the Almighty. The process appeared to be dynamic, so the lasers grew closer over time, but at a painfully so pace that made it hard to track minute-by-minute movement.

The lasers made contact at around 1:50PM ET, nearly a full hour after the event supposedly first launched. (It’s unclear if there actually was an initial real at first or if Bungie purposefully designed it to be as slow-moving as it actually was.)

As we closed in on close to 90 minutes after the event first started, the ship began to explode in apparent slow motion. But that’s when the one exciting portion of the event kicked in, as the Almighty began crashing toward the surface of the Earth and bits of debris began flying off. This was the only actual dynamic part of the experience, as everything else felt like a series of subtle screenshot changes to in-game sky.

It ultimately ended with an exciting crash landing and a shock wave, and now the Almighty’s landing site appears to be a permanent fixture of the background of the Tower. If players end up inspecting some of the crash debris (after re-zoning in), Bungie is awarding an emblem.

Still, that the conclusion, which lasted under 10 minutes, required 90 minutes of build up and resulted in just an emblem and not much more illustrates the mismatched expectations Bungie may have inadvertently cultivated.

I think this is cool but you gotta give more of an indication of how much time people should budget. I figured this wouldn’t go past ten minutes

We’ve never seen Bungie try something this ambitious with Destiny 2 before, and the end result was certainly exciting when you consider what could come next. The closest the studio has come is with 2018’s Forsaken expansion, in which the game’s new location, the Dreaming City, underwent a transformation after the very first raid team bested The Last Wish activity. But it was not at the scale of the Almighty event, and this is Bungie’s first real attempt at building a months-long narrative culminating in some form of shared experience for the player base.

Fortnite, although it’s best known for being a wildly popular battle royale game, has emerged over the last few years as an industry leader in what can only be described as live, simultaneous events. These are in-game events that happen in real time and are experienced only once by every single player who happens to log in and be present for the show. Fortnite isn’t the first of its kind to do this; massively multiplayer online games (MMOs) and online sims like Second Life have been experimenting in this department for years. But Fortnite features undeniably the most impressive and technically challenging versions of these events in all of gaming.

Starting with an in-game rocket launch back in 2018 and growing steadily more ambitious every few months with more complex and ever-evolving events like last fall’s black hole stunt, developer Epic has proven it has the technical chops to do what video games even just five years ago considered almost impossible. More recently, Epic held a stunning Travis Scott show that projected the rapper as a superhuman skyscraper-sized hologram for more than 12 million players and, last summer, concluded a multi-month storyline with a mecha-monster showdown, Pacific Rim-style.

Part of what makes Fortnite’s events so fun and feel so unprecedented is that they are so intricately built over time. Epic, through whatever technical achievements it’s built under the hood of its battle royale game (the developer has never shared how it pulls these events off), is able to change its map in subtle ways almost every day, adding clues to find and expanding teasers of larger events all without having to take down its server for maintenance. Some of its most successful feats have included a live event that then kicks players right into an all-new, changed game map, no update required.

Bungie’s approach is nowhere near that sophisticated, at least not yet. But the developer is trying something new and it’s clear the studio has taken ample notes from watching Fortnite. The Almighty grew ever-closer in the sky over the past season, and players logging into the Tower on Saturday morning noticed all the non-playable characters having shifted their positions to get a clear look at the ship’s descent. These changes were minor and it will be interesting to see if Bungie can step up its game for future live events, if it does indeed try them again.

Regardless of the overall quality in this Almighty event, experiments like these represent, for the first time, Destiny 2 living up to the series’ original promise of a shared, living, and ever-changing world. They help the game better straddle the line between shooter and MMO, even if it’s taken quite a few years and nearly two full games to get there.