Disney Plus is six months old – has it lived up to its promise? 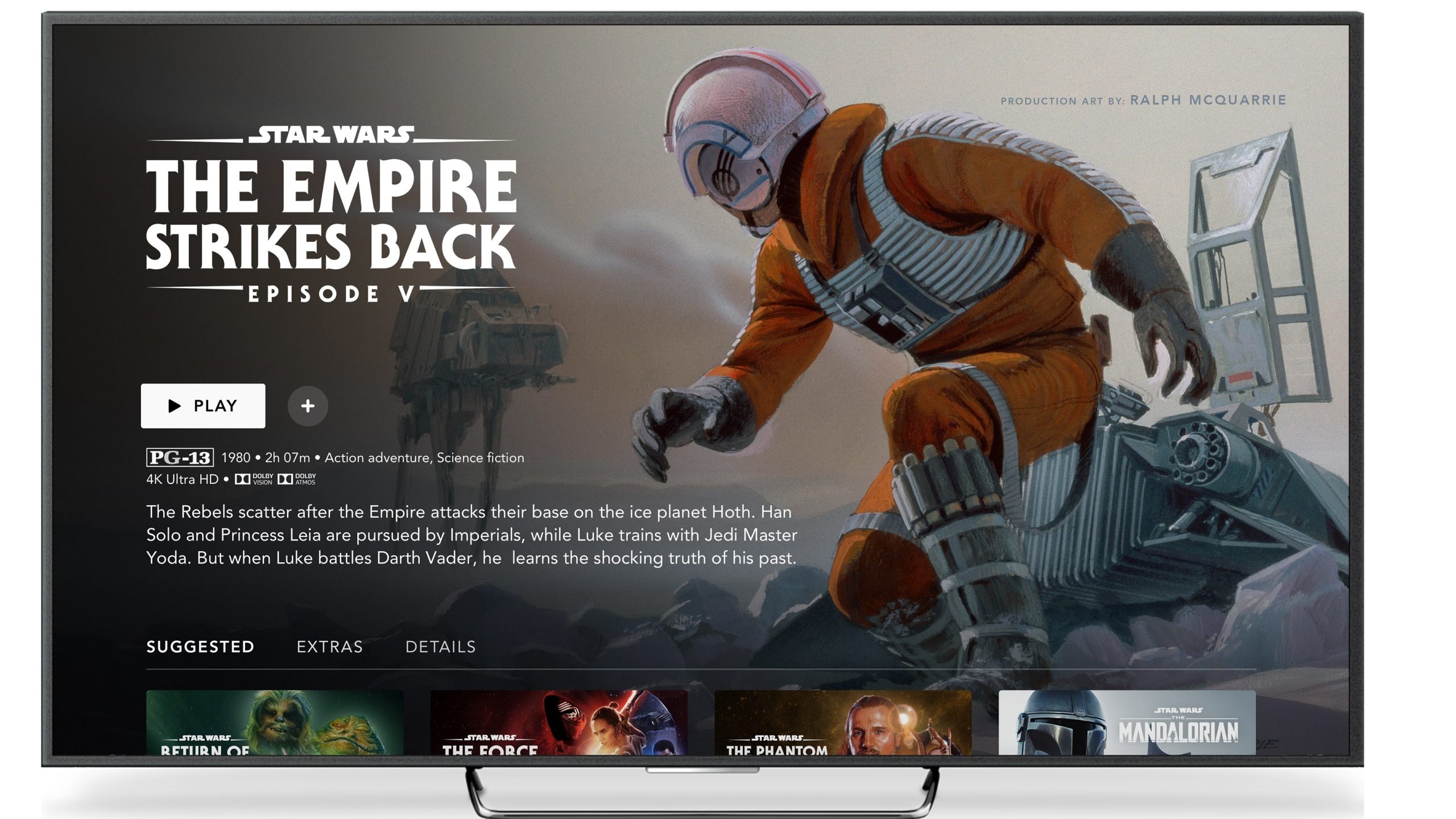 This means people have to spend more to get everything they want, a situation that isn’t going to get any better with the coming launches of HBO Max and Peacock, but it also results in deeper catalogues of content and more specialist offerings. Disney Plus encapsulates this, with decades of obscure material you wouldn’t have found on Netflix or Amazon Prime, as well as classic movies you wouldn’t see available elsewhere.

It’s been six months since Disney Plus launched in the US, Canada and the Netherlands on November 12, 2019. It launched a week later in Australia and New Zealand, with a UK release coming in March 2020.

If you love Disney, Marvel and Star Wars, this is definitely the service to get, and that hasn’t changed. Its baseline offering of movies is evergreen (who didn’t want to watch something Star Wars-related on May 4?), and the price is reasonable for what you’re getting compared to its competitors, especially with the generous helping of 4K HDR movies available.

Six months on, that archive is still the main reason to get Disney Plus. If you’re an older user with no children, you might find the service less appealing than Netflix or Amazon Prime. The family focus, though, means it’s the ideal service for children’s viewing habits: that is, watching the same films over and over again, until the songs from Frozen or Moana are drilled into your brain. On that level, the archive is doing its job.

Originals, though, are the obvious area where Disney Plus could use growth. There are gaps in the library, too, particularly in the US, where some high-profile movies like the live-action versions of Beauty and the Beast and The Jungle Book are still tied up in existing deals with other outlets. While the most obvious Disney kids’ cartoons are accounted for, too, like DuckTales or Recess, it’d be cool to see more obscure Millennial-friendly ’90s fare like Lloyd in Space or The Weekenders make the cut.

Another blip has been The Simpsons’ ongoing lack of a 4:3 aspect ratio option, with earlier episodes (so, the vast majority of the good ones) cropped in on the picture to achieve a 16:9 aspect ratio. That’s due to be fixed by the end of May 2020, but that’s now been a problem for six months, suggesting that Disney isn’t that fast at implementing changes on its app.

Still, movies are the calling card of Disney Plus, and that hasn’t changed during the past few months. In fact, accelerating film releases onto the platform has helped the service stay vital during a time when everyone has been streaming at home a lot more.

How the pandemic affected Disney Plus

The one factor in Disney Plus’s first six months that wasn’t anticipated, of course, is the global health pandemic. That’s shaped several major decisions regarding the service. Pixar’s Onward, a movie that lost millions of dollars as its brief theatrical run came to a close upon theaters closing worldwide, ended up being an extremely compelling reason to sign up (UK viewers, though, still have to wait for it).

It was also a smart move by Disney to move the streaming release dates forward for Frozen 2 and The Rise of Skywalker. On a similar note, Disney’s efforts to make a big event out of Star Wars day on May 4 was pleasing, too, as the listing pages for each movie were revamped with original concept art to mark the occasion. That’s the sort of touch that makes the service feel like the destination for fans of these fictional universes.

Most recently, Disney made a huge gesture by abandoning plans to release the original Broadway recording of the musical Hamilton in theaters in 2021, instead deciding to release it on Disney Plus this July. That was a terrific move – and it’ll open the musical up to a much bigger audience. Obviously you still have to pay for Disney Plus and have a device to stream it on, but that significantly brings down the class and geographical barriers that would stop people from seeing Hamilton live.

Maybe this wasn’t always the plan for the first six months of Disney Plus, but it’s kept giving people reasons to get excited about the service. Disney Plus’s global subscriber numbers sit at 54.5 million as of early May 2020 – and its goal was 60-90 million in the first five years, indicating a good start. Retention is the challenge in the coming months, especially when yearly subscriptions start running out in November. But hey, that’s Disney’s problem, not yours.

The easiest stone to throw at Disney Plus in these opening six months is its lack of high-profile original content. Star Wars TV series The Mandalorian wrapped up in December in the US, and it’s still the service’s most compelling original offering. Other big hitters include the live-action Lady and the Tramp movie, which arrived at launch, fantastic documentary series The Imagineering Story, and the recently-wrapped final season of The Clone Wars.

Disney has actually rolled out plenty of original shows alongside its big Star Wars titles, as well as high-value National Geographic content like the movie Elephant. Have you been watching Shop Class, a competition show hosted by Justin Long, with the same enthusiasm as you did The Mandalorian? Probably not, but the service is intended for a broad audience. Fellow originals Diary of a Future President and High School Musical: The Series are targeted at tweens, traditionally the remit of the Disney Channel.

There is a sense that The Mandalorian is doing slightly too much of the heavy lifting in terms of originals, particularly as its most compelling offering for the time being is a (great) documentary series about the making of the show. But, as the service rolls out to Japan in June, more of Europe in September and then Latin America in late 2020, this Star Wars TV show is still a compelling incentive to sign up, even if another major live-action original would’ve been ideal for this first half of 2020.

Along with the rest of the world, Disney has got unlucky in the timing of Covid-19, which has put The Falcon and the Winter Soldier production on hold just weeks from its expected finish date. WandaVision, it’s been reported, did finish filming in early March.

In a timeline where Covid didn’t happen, Disney would have two live-action MCU series and another season of The Mandalorian in the last four months of this year. So far, Disney has only confirmed that the latter will hit its previously announced release date.

This pretty much would have guaranteed Disney Plus a string of breakout hits in a row. Still, the enthusiasm for The Mandalorian must have outstripped even Disney’s expectations, as Baby Yoda took over social media – and another season this year that’s rumored to feature Boba Fett and The Clone Wars’ Ahsoka Tano will likely capture imaginations in the same way.

In addition, Disney has reconfigured its schedule to make the upcoming Artemis Fowl movie an original offering on the service. In our opinion, the trailer for that film – an adaptation of a popular book series about a precocious mastermind – makes a poor first impression, though it’s directed by the dependable Kenneth Branagh. That’s streaming June 12.

It’s also very likely that Disney Plus will add season 31 of The Simpsons when it’s done airing on Fox this summer, which will be a nice content boost. And, as mentioned, the release of Hamilton in time for the July 4 weekend will be a massive deal.

In terms of how it’s reacting to the world of film and TV being on hold, it seems like Disney is making the right moves. Long-term, a lot depends on how quickly Hollywood gets back to work, and it’s hard to consider that a priority given everything that’s going on right now.

Disney has committed to more original shows down the line, too, most recently an untitled Star Wars TV series from Russian Doll co-creator Leslye Headland, a TV version of National Treasure (presumably without Nicolas Cage), and an adaptation of RL Stine’s Just Beyond book series. Among the other highlights are a new version of Mighty Ducks, featuring original star Emilio Estevez and Gilmore Girls’ Lauren Graham, and the Obi-Wan and Cassian Andor Star Wars shows we’ve known about for a long time.

According to a THR report in March, over 50 scripted series and around 50 unscripted shows are in development for Disney Plus.

Our Disney Plus wishlist for the next six months

When you think about it, The Simpsons is as adult as any primetime show. Frank Grimes electrocuting himself to death is something you can watch on Disney Plus, as is Barney’s dependence on alcohol and Homer’s, er, ‘misfortune’ at the hands of a panda. So why not other shows that are on the edgier side?

It still feels like the offering of classic TV shows on Disney Plus is a little too conservative. Some really obvious stuff should have made the leap by now. Malcolm in the Middle, which was the closest thing to a live-action Simpsons as there was during the time it aired, was teased by Disney itself back in August, but after six months there’s still no sign of it coming to Disney Plus. It would be nice to see a more regular schedule of all-ages primetime shows like this dropping on the service.

According to a Reddit user, a Disney Plus survey asked if people would be interested in seeing sitcoms like Black-ish and Modern Family on the service. Those would surely be a really good fit. The survey also mentioned Buffy the Vampire Slayer, which is probably too adult for the image Disney is going for (not that we’d mind). We asked Disney to confirm whether this survey was real a while back and didn’t get an answer.

Even if Disney isn’t ready to show new originals, yet, it might be nice to get an updated look at what it’s got planned. Everything we’ve seen so far of The Falcon and the Winter Soldier, WandaVision, Loki and Hawkeye has come in the brief Expanding the Universe special on Disney Plus, and of course, a fantastic Super Bowl teaser.

Disney will never move its true tentpole releases to a streaming service before they make money in theaters, either, simply because their budgets are astronomical and they dominate at the box office. But what if it showed the opening five minutes of Black Widow or Mulan, just to get people excited, and to remind them to go to the cinema once it’s safe for them to reopen?

There’s room for more experimentation, with both old and new programming. And Hamilton shows that Disney is interested in trying bold moves.

Disney Plus has made a solid start, but the next few months will be key

Disney Plus could definitely use a few more high-profile originals. But in an unprecedented time, these first six months of the service have been buoyed by regular movie releases, and commitments to big events to get subscribers excited.

The next six months will be more crucial than the first, as viewers truly figure out where Disney Plus sits in their online viewing habits – and we’ll see if a slow drip-feed of big originals works as well as a Netflix-style strategy of shotgunning them out.